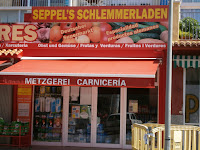 I had joined the local British expat group a year ago but had never attended any of their activities.  The fact is that although I have no friends or social network here, I also have very little tolerance for the expats who have little interest in learning about the place where they live and don’t make the slightest effort to learn the language (neither Catalan nor Spanish), something the Brits in Spain are famous for.  Most of the Brits I had met here so far don't watch and some don't even have receivers for Spanish television.  They are all connected via satellite with Britain.  And it is at events like this where you hear comments such as “The people here should learn English” referring to their doctor, the shopkeeper, or their car mechanic.  At this lunch one Brit complained about a restaurant they used to go to but stopped because it had been bought by Catalans and the food now was very Catalan.


But when I saw a winery tour scheduled for July, I signed up.  This, finally, was an activity that interested me.  The winery tour would be followed by lunch at a nearby restaurant and the whole event would take place very near Figueres, in two villages I had never visited.  Nothing ventured, nothing gained, so I went.


Before the tour began I hear a woman speaking American English so I sidled up and introduced myself.  I and her husband L are from Richmond California, about twenty minutes from where I used to live in Berkeley.  It’s a small world.  They live in California but have a vacation home in Empuriabrava.  They, in turn, introduced me to the couple they were with, H and T who also have a vacation home in Empuriabrava.  H and T are Polish and live in London.


My parents were from Poland and it turned out that I had a lot in common with the Poles.  I could demonstrate the three Polish words I know (which translate to “I have to make pee pee”), they immediately started calling me by my Polish name, and, we sang Polish songs (I only sang one song that my parents used to sing and that somehow, I still remembered after more than 50 years).  I had a grand time.


Soon afterwards H and T invited me to their house for lunch.  Besides a lovely meal, we shared old photos and they told me about their war experiences.  At the end of the meal H brought out coffee and a very good-looking coffee cake.  I asked if she made it.  But no, she had bought it.  The Catalans don’t do coffee cakes so I asked her where she had found it, and they told me about this German bakery inside a German grocery in Empuriabrava, and gave me directions how to find it.


Two days later I was off to find the bakery.  Months ago, I had gotten fed up with toast every morning and had started baking my own sweet quick breads in order to have something nice with my morning coffee.  I was in the routine of baking every weekend, but lately it was simply too hot to turn on the oven.  This coffee cake thing would be a boon to my diet.

Empuriabrava is only about twenty minutes away, and the grocery was exactly where T said it would be.  In it were all kinds of interesting products that you would never find in a Spanish grocery store.  Much of it was appealing (especially the herring) but I wasn’t there for groceries; I was there for coffee cake. 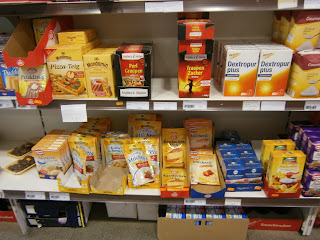 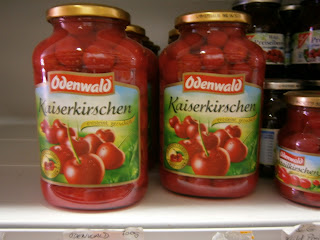 And there it was at the bakery.  Trays and trays of coffee cakes.  Plum, cherry, apple, rhubarb (it’s rare to find rhubarb here so it isn’t surprising that most Catalans have no idea what it is).  I bought some plum and some rhubarb. 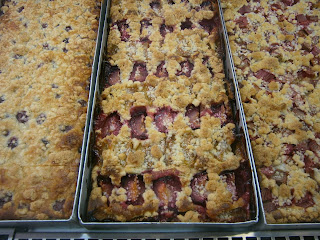 A week later, I went back and bought more.  Then, a week later, I went again.  Now my car was getting a regular weekly workout.  The last time I was there I mentioned to the saleswoman that I had come from Figueres.  “Oh,” she said.  “We have a shop in Figueres,” and she told me where.


Their shop is three blocks from my apartment.  How many times had I walked by and not noticed it?  And how long until I need to drive my car again? 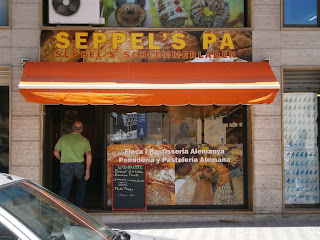