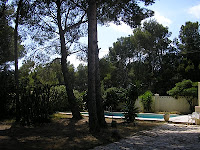 My summer living quarters are in a small in-law apartment at Eve’s. One of the disadvantages of living in a home I can’t afford is that I must move out of it and stay elsewhere every summer while I rent it out to tourists. At least it’s possible to do that here, this being a popular seaside resort. Besides having to pack up and store all those special personal possessions that I don’t want strangers messing with, it also gives me the feeling of not having a permanent home. Except for my cats, my most treasured possessions don’t live with me. I keep them safely stored away, waiting for the day when I have a normal life, when I don’t have to share my home with strangers and can keep my treasures with me – things like my good dishes, the electric candle lamps that used to flank the family fireplace, the Lladro dancer figurine I once gave to my mother for her birthday, and photos of my parents. It might be different if I were to go somewhere for a real vacation – the South of France, perhaps? – but I can’t afford that and I have to be here to manage things, so I simply move out, take my cats with me, and go to stay nearby. I was very happy when Eve told me I could use this apartment, thus allowing Manuel, with whom I would otherwise stay, to continue to enjoy his little space on his own, without three intruders.


I feel as if I were at camp for the summer, surrounded by pine trees like up in the San Bernardino Mountains, except these are Mediterranean pines and I am a few hundred meters from the sea. I have only one room with a bathroom, but it’s a good-sized, spacious room with a kitchen counter and sink and mini refrigerator. Although I can’t cook, I brought my espresso machine and toaster with me so for breakfast I can make my morning espresso (with foamy steamed milk) and toast. For lunch I make a salad, during the day I munch a piece of fruit or down one of those yoghurts that is supposed to lower your cholesterol (I don’t believe it really does much of anything, but I like the stuff), and in the evening I snack on some bread and cheese, just like I do at home, having cut out evening meals years ago. 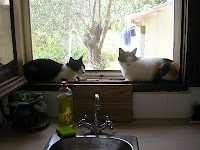 Except for the lack of cooking equipment, television, and internet, I don’t really miss much and in some ways feel more comfortable in this much reduced space. It is only a little smaller than the duplex I once owned on Bancroft in Berkeley where I felt like Heidi. I think I could live happily enough without a television, but I very much miss having internet access at home. I normally spend time online reading and writing email, participating in two online book groups, writing my blog, participating on expat forums, reading through Vincent Van Gogh’s letters to his brother Theo, looking up all kinds of information, and conducting the rental business. Now, if I am desperate to do something other than read or study French, I pop a DVD into my computer and watch a film. Staying here is good practice for figuring out what kind of space I might buy when I finally am able to sell my villa and move. A very small apartment would suit me fine, although I would probably prefer that it have a separate bedroom. When you have two cats, it is good to have a space where you can either lock them in, or lock them out, depending on the problem at hand. 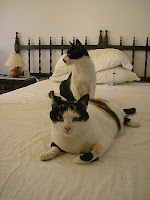 The fact is, when I’m with my cats, I feel I’m at home. Minnie and Felix are so happy here that I’m not sure they will want to go back to our house in September. They now have a huge garden to explore and after the initial fear passed, have been having a fine time although they play less, probably because of the torpid weather. Contrary to the common wisdom of not letting cats out for the first two weeks at a new home (something I have never done), I let them out the day after we arrived. Frankly, I have never understood the universal description of cats as solitary, independent creatures who are more attached to places than to people. All my cats have been completely attached to me and have been very social (if somewhat shy of others), and Felix, the feral, wounded cat who lived his first year and a half on the street and who I recently adopted, is the most affectionate cat I’ve ever had.

My garden at home is mostly lawn – a very green, nicely kept lawn bordered by cypress trees around three sides of the perimeter and oleander (now in bloom) across the back wall. Near my dining room I have a small area planted with lavender, roses, gazanias, and rosemary. Basically it is a small and simple, manicured, green garden.

Here the garden is very large and very different. Brian, Eve’s husband, used to garden and clearly spent quite a lot of time at it. But he is now in a care home with advanced Alzheimer’s and the garden is regressing towards a more natural state. This is a good thing for the cats. They like adventure and my small, manicured garden doesn’t provide much of that. 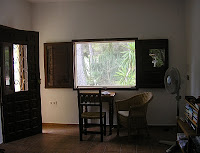 I’ve only moved a few blocks and yet the atmosphere is noticeably different with new sights, sounds and smells. There are several pines around the house plus more on all the adjoining lots, creating a small neighborhood pine grove. Perhaps because of all the pines, the birds that come into the garden are different. At home I get mostly sparrows and some swallows (that skim the top of my pool for water). Here there are many wood doves and magpies. Eve also has many other types of trees, grape vines, cacti, and countless stone- bordered beds running amok. I read sitting at my front window where in the early evening, the aroma of jasmine starts to drift by, a pleasant, new experience for me, but by late evening the scent becomes overpowering. I probably really am meant for an urban life. 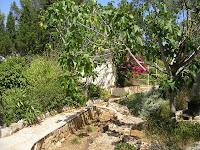 Among the new sounds, the most frequent is the cooing of wood doves that favor the surrounding pine grove. Then there is the chattering of magpies, and finally the cicadas. I love to stand at the back kitchen window and listen to them, that chirping somehow transports me to Marcel Pagnol’s Provence and the films My Father’s Glory

and My Mother’s Castle

. The annoying noise here is the public announcements, broadcast from our town hall, that come in over loudspeakers scattered throughout the neighborhood. I get them at home too, but at my house they aren’t as loud. Here, when the announcements begin, they are so overpowering you can’t hear anything else. Besides being horribly intrusive, the announcements are a waste of time and a needless source of noise pollution. Monday through Friday, we are told twice at each broadcast all the news the town hall wants us to know including that the new underground parking lot is available for yearly rentals, what special activity will go on at the weekend, and which pharmacy this week is on 24-hour call. It goes on for five or ten minutes. The town runs a radio station; why don’t they announce these things there? How about posting it all, quietly, on one or more bulletin boards? Does anyone ever actually listen? 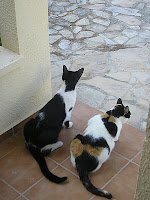 It’s nice having a neighbor who is also a friend. No need to arrange to meet, we see each other on the way in or out and sometimes just pop by to chat. Of course Eve has television and invited me over to watch Spain play Holland at the World Cup final. We ate snacks while cheering Spain on (they played way better than Holland and we were quite loud for two mature ladies) and toasted the new champions with cava. So summer, like so many things, is full of the good and the inconvenient. But I try to follow the example of my cats and regard it as yet another adventure.
Posted by Dvora at 10:08 AM 2 comments: