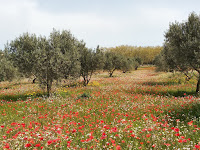 Cupcake wanted to come. But he hates riding in the car. Well, I figued it wasn’t far and soon it will be too hot to take him anywhere or do anything except the shortest of walks, so he came too.

The ride was beautiful and not far before we arrived at San Climent, I saw poppies off in the distance. There was a village there so I turned off the road and headed in. I rarely drive all the way into the center of a village. They are usually very small, the streets are medieval, very narrow and often one-way, going in every which direction, so once you drive in, it isn’t always that easy to find the way out. I avoid the stress by parking the car at the outskirts and walking in.

The outskirts here had a vineyard. I liked the look of the vines so Cupcake and I walked over that way so that I could take a couple of photos. There was a farmer riding his tractor through the vines, clearing out some of the weeds. I took my photos and then started to walk to the center of town. 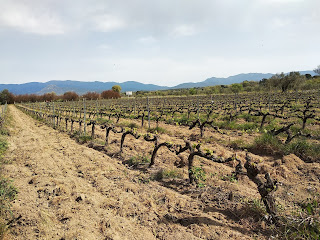 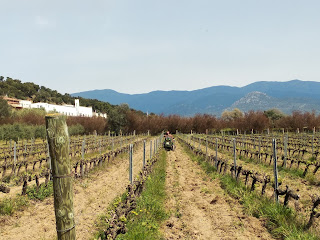 Someone was calling. I turned, and it was the farmer. I thought he had been calling to a guy riding by on a bicycle, but no, he was calling me. So I went back to see what he had to say.

He just wanted to talk. I guess he was pleased that someone thought his vines were pretty enough to photograph. We chatted for a while. He told me he no longer took his grapes to the cooperative in town because there were now too few people left and the cooperative in the village had closed down.

Cooperatives are one of the things that stand out about Catalonia and that say something about Catalan culture. One hundred years ago, every town and village had a cooperative. Many of them are still operative and some of the buildings are stunning, built in the Modernist (Catalan Art Nouveau) style, although the one in this village just looked like a plain warehouse.

So he takes his grapes to another nearby town that has a thriving cooperative (I’ve bought their wines), and his grapes get blended with others to get bottled under the label of the co-op. But he does make his own olive oil. His name was Josep. I wanted to take his picture but he wouldn’t let me. So I took a picture of his John Deere tractor instead. 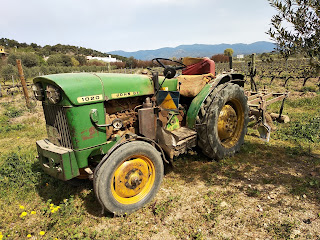 The village was Masarac, population 280. In my meandering, I saw no shop, no cafe, only houses, a winery, the city hall, and something that looked like a castle, everything built of stone. 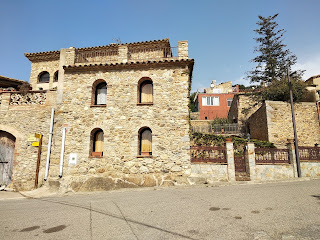 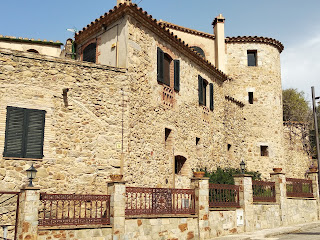 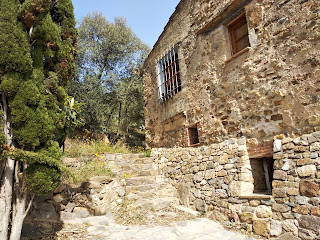 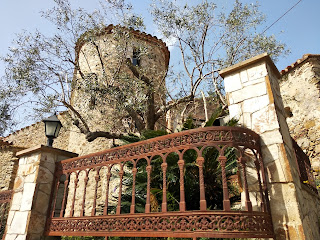 At the center there was a small shady, grassy area, and I climbed the few steps to let Cupcake off the leash and wander a few minutes on his own in the shade. The day had become nicely warm, but for Cupcake that meant uncomfortably hot. Up there was a man with a bicycle, maybe the same one who had passed when I was looking at the vineyard. He was a bit scruffy but friendly and started in chatting. He talked about hunting dogs. Twenty of them that he kept. Didn’t sound good to me, but I made no comment. When you go walking on country paths, even the one I regularly walk on, during those times of the year when hunting is allowed, you can sometimes hear the guns. Turned out the dogs weren’t his. He took care of them for someone. He doesn’t live in the village, he lives in Sant Climent. And whereas I thought he said he didn’t eat meat, which I thought was a bit strange for a hunter, it turned out that he doesn’t eat meat on Good Friday, and doesn’t understand how everyone has barbecues that day. I didn’t take a photo of him either.

I wandered around a litle longer but Cupcake was telling me he was wilting and it was time to head back. 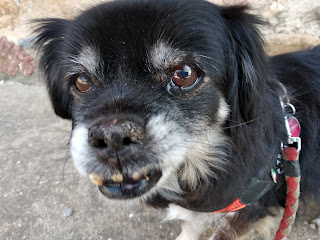 Like I said, these villages were built in medieval times and the streets run every which way. This turned out to be a good thing because it allowed me to stumble upon that field of poppies that I had seen earlier. It was actually an olive grove carpeted with alyssum and poppies, and it was just beautiful. 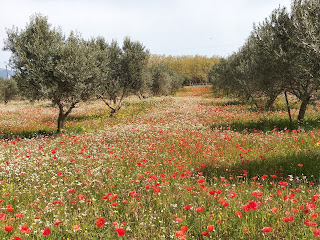 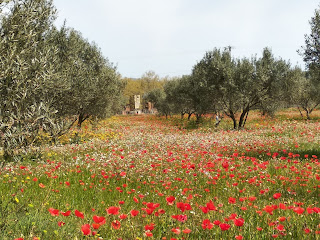 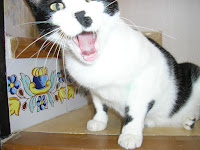 Felix was a black and white cat with a very colorful personality. I met him when he was about a year old and one of a colony of about twenty stray cats that a Dutch neighbor was taking care of. She would feed them and when a new cat showed up, she would take it to the vet to have it neutered. When she went on vacation I would feed the cats and that was when I met Felix.

Right away he stood out from the others. My method of feeding the group was to put distinct little piles on the ground at small distances, so each cat would have its own portion and they wouldn’t have to fight over food. And that worked well; each cat would settle at one spot and eat what was there. Not Felix. He would move from one pile to the other, nudging each cat and eating some food at each stop to what must have been the annoyance of the others. Maybe because he didn’t stay long at any stop or maybe because of his charm, there never were any fights. In the end, he would settle at his own spot and eat just like all the others.

One day, Felix showed up limping. Being alarmed and not knowing what to do, I called around to get some advice. The advice was that I should do nothing and just wait. These things happen and more often than not, whatever is wrong will cure itself. But two days later Felix showed up not looking any better. I had brought a carrier with me just in case, so this time I scopped him up and took him to the vet. An Xray showed that he had a pellet in his leg. One of the neighbors had shot him.

He had been with the vet for about a month when I went to pick him up and return him to the colony. The vet hadn’t done any surgery and said he was fine; he thought it best just to leave the pellet where it was. I would have come to get him sooner if I had known. The vet charged me nothing for the one-month hotel stay, but I saw that he was still limping. I didn’t feel comfortable letting him back out on the street with a disability, so I took him home to let him recover in safety. 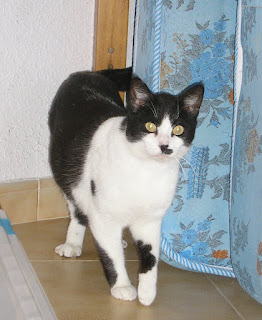 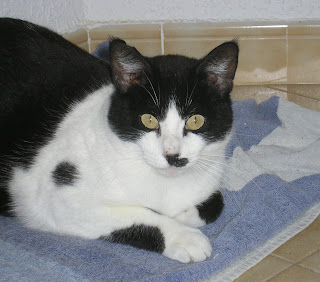 And of course I never did put him back out on the street. After being in one of the bedrooms for a few days, I let him out into the house to meet Minnie in her territory. In no time at all they were friends, playing and resting together. He may have liked her company more than she liked his, but they ended up becoming good friends. 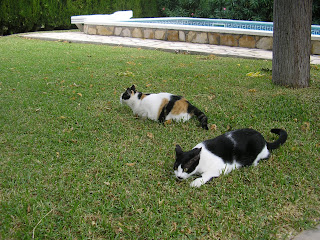 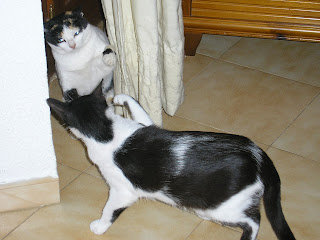 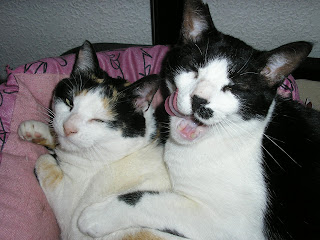 For the next few years they kept each other company. They played a little and slept a lot and were happy. Originally they could go out into the garden (and the neighborhood) during the day but I always had them in at night. 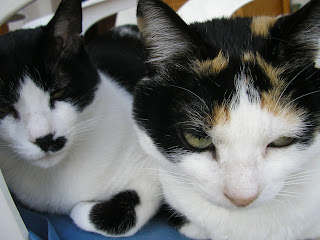 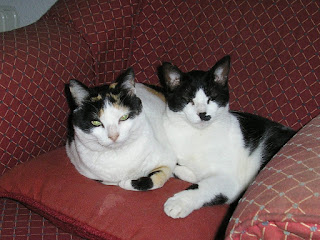 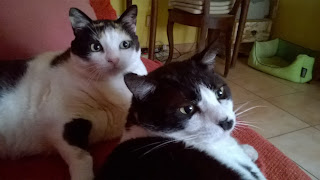 When we moved to Figueres, into an apartment with only a small balcony as outdoor space, their lives changed as did mine.  Of the three of us, Felix was the one who missed the outdoor space the most. 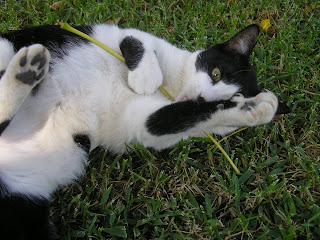 Minnie and Felix were with me during my divorce and during my move to Figueres where I didn’t know a soul. They were my company and support during all those difficult years. When Felix died it felt like the end of an era.

Felix was a very social cat. He spoke often and filled the room with his presence. His meowing and occasional yowling (that grew more frequent at the end, probably a sign he was in pain) was sometimes endearing but sometimes very annoying. He wanted to play but always more than his sister Minnie, who wanted to play even less over time. He wanted to be near her and I think most of the time she liked that, or at least didn’t mind. Minnie died in the spring of 2019 leaving Felix with no cat for company for the first time in his life and a dog who didn’t like him. 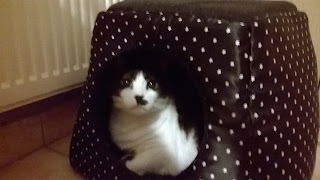 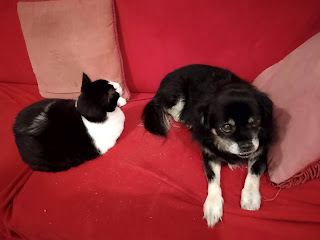 Felix became obviously sick at the end of January 2021 and died on the first of February. He had been with me for eleven years. Soon after I adopted him he developed epilepsy and once the seizures became frequent, I started giving him phenobarbitol. He later developed other health problems, including kidney troubles, then with age, heart problems. But he was strong of body and personality and easy to give pills to, so with the help of medications, he did fine. In the end it was acute pancreatitis that did him in. I was left with the painful decision of trying to cure him but probably just making his suffering last longer, or having him euthanized. I held him in my lap as the vet gave him the first and second shot. He didn’t feel a thing and died peacefully.

First morning without Felix was awful. Of course he wasn’t on the bed when I woke up, no pee or poop to scoop from his box first thing, and there was no meowing as I was getting ready, Strangely, the worst was not having to give him his medication. For over ten years I’ve been giving him phenobarbitol for epilepsy. This treatment has to be done always at the same time of day or they can go into an unstoppable epileptic seizure. It’s basically a matter of life and death on a daily basis. Even when I was ill I was sure to get up and give him his pill at the right time, between 8 and 9 am, usually at 8:30. The only days I didn’t give him his medication was when I was away on vacation and then I had someone come in to do it, usually my friend Judith. If I couldn’t find anyone, I wouldn’t go. Not having him on the bed when I woke up or meowing when I got out of bed, his box not needing to be emptied were all sad and left me with a feeling of emptiness. But after my shower, going back into the bathroom to get his medication and realizing there was no one to give it to was like a punch to the chest.

I buried Felix’s ashes in a small grove of trees surrounded by fields of wheat and corn. He joined Minnie who I also buried in that same place two years ago. It is a pretty spot, out in nature but close to Figueres, just alongside the walking path that is the Cami de Sant Jaume or Camino de Santiago de Compostela in Spanish and that I walk on often. A small part of his ashes (and Minnie’s) stay with me at home. That way my two long-time companions can be outdoors or with me, as they choose. 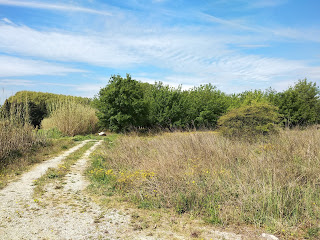 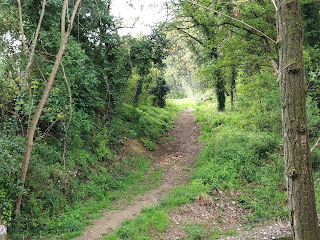