Catalan Exiles are Spreading Out

There are now Catalan political leaders living in exile in three different countries within the E.U. Until recently there were five living in Belgium: President Puigdemont and four of his ministers. A couple of weeks ago Anna Gabriel, a member of the Catalan parliament, refused to appear in court to answer to charges of rebellion and sedition and went to Geneva. Now Clara Ponsatí, one of the four ministers who had been in Brussels since October, has gone to Scotland to resume her position as a professor of economics at the University of Saint Andrews.

Ponsatí was the minister of education in the last Catalan government.  She says that her colleagues in Scotland are shocked that she has been facing charges of rebellion and sedition with the possibility of a 30-year prison sentence in Spain. For one thing, because they know her well, and for another, because rebellion and sedition do not exist as crimes in Great Britain. Then there is the fact that the British government agreed to Scotland voting on the same kind of referendum that Spain says is illegal for the Catalans and for which Catalans are being imprisoned, without trial.

She also says that she will continue to work for Catalan independence. Now there will be a voice in Great Britain to add to the others in Belgium and Switzerland. 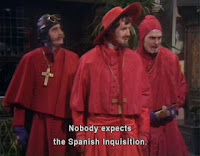 A new Spanish Inquisition is underway. This time its focus is political and not religious. The target is the Catalan independence movement.

It began four months ago with charges of rebellion against Jordi Sanchez and Jordi Cuixart, the two leaders of the large grassroots independence movements that held huge peaceful demostrations each year for the last six years on 11 September where, each year, one million or more people took part. It followed with charges of rebellion, sedition, and misuse of public funds against the all members of the former Catalan government. Five of those charged, including the President of the Generalitat (Catalan government), left the country and went into exile in Belgium; several, including the President of the Catalan parliament, were imprisoned after their initial hearing and subsequently released on bail; the remaining four, including the Vice President of the Generalitat and the two grassroots leaders (the two Jordis) remain in prison, in preventative custody. They have been charged with rebellion even though not one ever committed any act of violence. The judge in charge of the case has said as much. But he has also said (in fact, written in his interlocutory) that they must be held because they have not renounced their commitment to Catalan independence. In other words, they are being charged and held for their political beliefs.

The Spanish government then instructed its police to investigate the finances of the Generalitat to see how much money was spent on the October 1st referendum. This would pertain to the charge of misuse of public funds. I should make clear that although the Spanish government and the entire international press refers to the referendum as being illegal, it was not. Referendums are mentioned in the Spanish constitution and they are allowed. However, this one was suspended by the Constitutional Court. It was therefore a suspended referendum, not an illegal one. It should always have been clear to the international press and the international public (and questioned by them) that in a democratic country, no referendum should ever be illegal. Voting is, after all, the basis of a democracy.

The Spanish police searched and investigated and came to the conclusion that no public money was spent on the referendum. So much for misuse of public funds.

But Madrid is not satisfied and today, the Minister of Internal Revenue has announced that 60 news media, businesses, and persons will be investigated to see if they were indirectly involved in receiving payments from the Generalitat that were then turned into payments for the illicit referendum. Among the 60 are journalists, newspapers, media groups, all kinds of businesses, and private persons. They were selected based on their known support of Catalan independence.
They have called this a witch hunt. I call it an Inquisition. You are guilty because you believe in a political idea that the government doesn’t like. Or maybe you are guilty because you read a newspaper that presents a view that the government doesn’t like. Or maybe you write and sing songs that the government doesn’t like. Two singers were just convicted for that and sentenced to three years in jail. Maybe you listen to those singers and you will be charged soon with listening to songs that the government doesn’t like. People who have posted comments critical of the Spanish government or police (or king!) have been charged with hate crimes – a designation usually reserved for crimes or speech against a vulnerable minority. Since when is criticizing the government a hate crime? Since the new Spanish Inquisition went into effect.