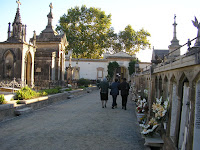 Sunday I unexpectedly attended a funeral. I had only found out the day before that Pere had died.  In fact, the Whatsapp came at 11:45 am, and he had died that same day at seven in the morning.  One of the people from the dog park heard it from another person, also from the park and who knew Pere better than any of the rest of us.  It’s a good thing that news spreads fast, because the Catalans waste no time in having the funeral.  One day you’ve died; the next day you’re interred.

Pere liked to tell to people at the park that he was younger than me.  This was true, but did not strike me as being particularly polite.  He was about three months younger, but he seemed much older.  It all fell apart for him months ago when he suffered a stroke from which he never fully recovered.  I’m not sure if he lived alone or with a roommate, but he was never able to return home and spent his last months unhappily in a nursing home.

Pere was a grumpy old man.  He wasn’t particularly jolly to speak with at the park, but he did have his good points:  He was a passionate supporter of the Barcelona Futbol Club and a passionate lover of animals -- or at least, dogs and cats.

He and his dog Chester were a fixture at the park -- always among the first to arrive in the evenings.  His love of animals was evident at the park where he would always come with a bag of treats for all the dogs – never mind that some of the owners did not want their dogs to be given treats.  For those he would wait until the owner wasn’t looking and sneak it.


Less evident was his ongoing feeding and caring for homeless street cats.  He took care of many of them, finding them homes if possible, and feeding the rest.  He didn’t have a lot of money – I believe he lived on a modest pension.  But he would be sure the cats had enough to eat, even if it meant that he didn’t.

When someone here dies, the music that is played most often at funerals is Pau Casals’ “El Cant dels Ocells,” (The Song of the Birds).  But there is a second song that also sometimes accompanies those who die, and it is “El Vall del Riu Vermell” (The Red River Valley) and that is what was played on Sunday.  Translated to Catalan, it is no longer the love song I remember about the cowboy lamenting his girl who is leaving the valley.  In Catalan it is about someone beloved who has left this earth (the YouTube video is sung in Catalan but the text is in Spanish).