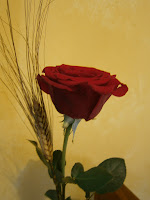 The reason for the rose is simple.  George killed the dragon (and saved the princess) and where the dragon’s blood fell a red rose grew.

Sant Jordi became a Catalan holiday in 1456 and ever since then men have been giving their loved one a red rose.

But the book?  Was George an avid reader?  Did he write?  The idea of the book came from a Barcelona bookseller way back in 1923 when he realized that William Shakespeare and Miquel Cervantes both died on 23 April 1616 (although it seems that Cervantes died on 22 April and was buried on the 23rd, but never mind) and thought maybe this coincidence would improve business.

And so it came to be that 23 April is celebrated with roses and books.  The tradition is that the man gives the woman a rose and the woman gives the man a book.  But in fact, it is much more free-form than that and there are lots of books for children as well as for adults. 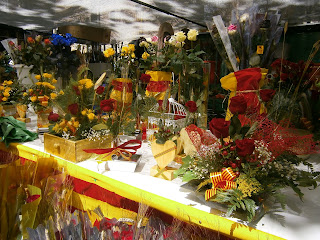 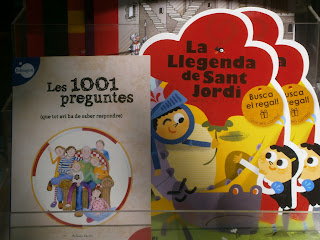 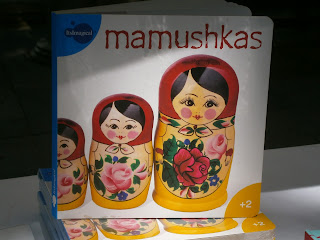 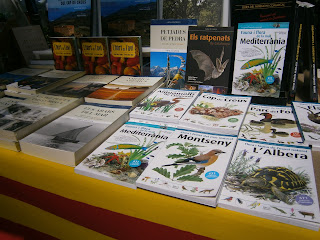 Sant Jordi is lovely.  In any city, town, or village, the main street or square will be lined with stalls selling books and roses.  Some of the stands are from bookshops and florists, others are non-profit, community, and political organizations set up to sell flowers or books or both as fund-raisers.  As you'd expect, the biggest book and flower fair is on the Rambla in Barcelona which is packed down its length and from side to side with books and roses, and teaming with thousands of people.  The Rambla of Figueres was also teaming with people when I went at noon with Cupcake to visit the stand of the rescue group who brought him to me.  But it was so crowded that I couldn't walk comfortably with the dog.  When I returned later, closer to lunch time, it had thinned out and I could take some photos.  When I too left to return home for lunch, it was clouding up, and while I was still walking it started to rain. 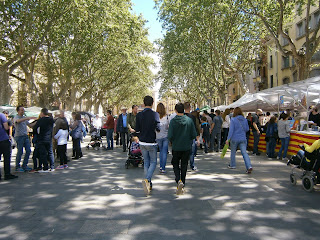 In 1995, seeing the Catalan holiday and thinking that celebrating books (and the death of two of literature's greatest) was a good idea, UNESCO declared 23 April World Book Day.  And so now, it is possible that in any city anywhere you might find a book celebration, especially this year, the 400th anniversary of the death of the two greats.  If you don’t find one, you might want to help instigate one for next year.  It’s never too late to celebrate.
Posted by Dvora at 8:04 PM 2 comments:

The first two years I lived in Barcelona I didn’t have a car and didn’t miss it.  I walked everywhere I wanted to go in town, and I used public transportation for outings.  Once we rented a car to go to the mountains.  It was fine.

Later when we had moved and needed a car to do just about everything, I came to see how crazy people here were on the roads.  When I walked, I was about the fastest and always weaving in and out among the other pedestrians.  But on the highway?  Goodness, gracious, great balls of fire!  No one obeyed the speed limit and lots of crazies would pass on a two-land road when there was an oncoming car.  My car.

I decided at some point that people here drive like madmen because there is little or no penalty for doing so.  Even if you run over someone and kill them not much happens.  When I got my driver’s license, a young man who got his at the same time said he was very happy because now he could do whatever he wanted behind the wheel.  And he’s not the only one to say that.

But lately there have been a couple of accidents that have brought to public attention the absurdity of no penalty and letting drunk drivers loose.  One young man was deemed drunk and had his car impounded, but he was not hauled in, despite the fact that he had been charged with drunk driving several times in the past and was driving with a suspended license.  He got his car back a few hours later after a friend redeemed it for him, and soon after that, while drunk, he crashed and killed a young woman in the other car.  The public was not pleased.

Because people are getting fed up with the risk of becoming roadkill (something blatantly clear to me for a long time, but not so obvious to the natives), the Catalan public television station has been highlighting all similar stories.  Of which there are many.  Yesterday’s took the cake.

A young woman was stopped at a control point and deemed to have double the allowable alcohol content in her blood.  It turned out that all the other four young women passengers in the car were also too drunk to take the car and drive the group home.  So one of them called her father to come and get them.

When the father showed up on his motorcycle, the police did a breath check before letting him drive all the girls home in the young woman’s car.  But lo and behold, he was found to be even more drunk than any of the five young women, with three times the allowable limit of alcohol in his blood.

I wondered how the six of them got home.  Did they keep calling other family and friends until they finally hit the jackpot?