Gemma, one of my doggy friends, had made arrangements to adopt a black kitten that had been rescued and was waiting for a home in a shelter in Palafolls.  Gemma doesn’t have a car, and she asked if someone could take her, and I thought, why not?  But because I had never been to Palafolls, nor had Gemma, and neither of us had a sound idea of how to get there, we invited Josep, who knows these things and is lively company, to come with us.

Josep has lots of experience driving on- and off-road throughout the area, both in autos and on motorcycles.  As we drove along, he knew in advance that there would be a gas station after the next curve or a restaurant that had great breakfasts after another.  But in fact, he had never been to Palafolls either.  Not to worry.  Palafolls is about an hour away, on the way to Barcelona via the slow road, and is near to but not on the coast.  I had looked it up on a map at home, Josep turned on his cellphone GPS, and off we went.

We took the deadly national highway II, which is a two-lane road, distinguished by the singular use of Roman numerals (for the first few years I thought it was highway 11), where many fatal accidents occur.  Even so, it is not as deadly as the national highway 340 in the area where I lived before in the south of Catalunya.  With that in mind, it is relatively safe and I was relatively relaxed.

Winding along our way, conversation was continuously interrupted by the repeated announcement of the GPS lady telling us that “The GPS signal has been lost.”   We heard this fact at least twenty times, but not once did the lady provide us with a single instruction.

Palafolls boasts some beautiful old masies (farmhouses) and a castle.  We didn’t see any of those.  We did see the façade of the 19th century church of Santa Maria and had our coffee at a very large and lively café that, on a weekday morning, was teaming with people. 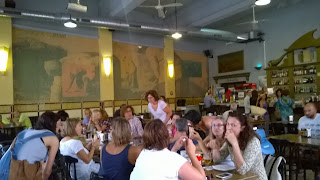 The black kitty had to be chipped, and Gemma had lots of papers to complete for the adoption.  Finally, cat in carrier, we set off for home with Batman. 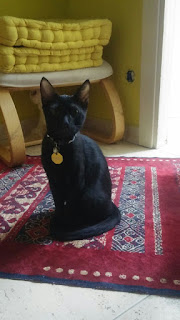 Credits: Batman photo by Gemma
Posted by Dvora at 10:51 PM No comments: