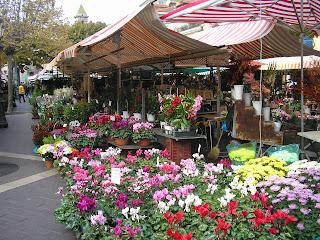 This is the outdoor market in Nice.  It operates Tuesdays to Sundays.  I could easily spend part of every day there. 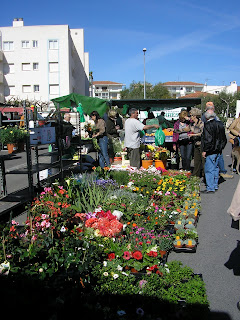 This is the outdoor market in L'Hospitalet de l'Infant.  It operates on Sundays.  It is where I go on a Sunday when I have nothing else to do.  I go most Sundays.  The market takes place on the sea, just overlooking the small sporting boat harbor.  I park at a distance and have a nice walk along the beach to make the outing worthwhile.  The mountains in the background remind me of Palm Springs. 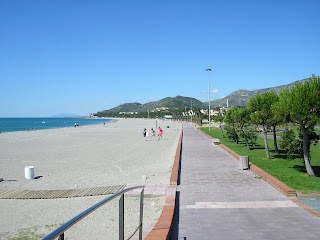 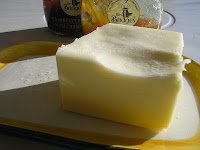 Although I watch TV news daily at mid-day, I don’t expect it to make me laugh.  For the most part I find the news frustrating, disturbing, and depressing.  I watch it anyway because I don’t like to read the paper and I feel I should keep up at least minimally with what is going on.
But today’s news did make me laugh.  The local news included a story of an incident that took place today in Olot, a mid-sized town somewhere inland and north of .  An ambulance had arrived at the home of an 83-year-old woman who needed to go to the hospital.  The paramedics went up to her apartment and brought her down.  When they got to the street they found that the ambulance had been stolen.  Because the hospital was nearby, they walked her there, rolling her in her wheelchair.  Then they called the police and reported the theft.
Now I ask you.  Who would steal an ambulance?  Is that a vehicle you can easily hide or disguise?  The thief was at least bright enough not to turn on the flashing lights and siren.  But in spite of his discretion, the police found him soon enough because every ambulance has a GPS system that allowed them to locate him immediately.  The man said he stole the ambulance because he needed to go to Girona.
If the news doesn’t make me laugh often, my cats do.  The other day it was Minnie’s turn.  Minnie is actually a rather staid cat and doesn’t engage in pranks often.  She prefers to sit and contemplate.  But this day she felt compelled to eat the butter I had put on the table in order to butter my morning toast.  I eat toast with butter and marmalade every day, but this was the first time she really tucked in.  If not for the telltale hollow decorated with a scratchy tongue, I might never have known.  She is certainly a far more subtle thief than the guy who stole the ambulance.
Posted by Dvora at 7:07 PM 2 comments:

Today’s post with be short and it will be political.  I always say that I’m not political.  When it comes to politics and to economics (and personal finances), I have a hard time focusing and seem incapable of retaining details.  If the report or argument goes on for too long, my eyes begin to cross.  It is not likely that in any argument, I could succeed in changing anyone else's mind.  And yet I am political in that I pay attention to at least some political issues.  As Lansky described in the book I just read, it must be in my Jewish background.  When company came, at our dining table we did not talk about the weather, or sports, or celebrities.  We talked politics.
However, the persecution of Judge Baltasar Garzon by the Spanish right wing is a worthy cause for me to bring up.  I’ve been watching this story unfold slowly and every time a new phase emerges, I am left sitting with my mouth open.  Can this be happening in a modern democracy, one that is part of the European Union?
Judge Garzon is being tried in three different proceedings.  One is for accepting money for talks he gave in .  Another is for the wiretapping of phone conversations of government officials and businessmen accused of fraud while they were in prison awaiting trial.  These conversations were with their lawyers and Garzon believed they were arranging for the secreting away of the ill-gained money.  And the third is for looking into the disappearance of thousands of victims of the Spanish Civil War and subsequent Franco regime.  After Franco died, passed an amnesty law making it illegal to punish any crime committed by either side in the Civil War or by the subsequent regime.  is home to thousands of unmarked mass graves.  Garzon was acting on the request of many people who lost loved ones and do not know, to this day, what happened or where their bodies are buried.  He says that crimes against humanity are not limited by amnesty laws of any single country.
Many people in support Judge Garzon.  They think that the first two charges are a ploy to weaken his reputation so that the Court will be able to rule against him on the third and most important charge.  The first verdict came in yesterday.  Guilty of the wiretapping.  In contrast, the first two of the government officials who were accused of accepting illegal gifts were acquitted recently and most of them have not yet been tried.
If you would like to read more about Judge Garzon and these trials, here are a few links written by people who can be more informative than me.
http://www.guardian.co.uk/world/2012/feb/09/spain-judge-baltasar-garzon-suspended
http://news.yahoo.com/spain-judge-garzon-guilty-wiretapping-trial-131708213.html

I finished Lansky’s Outwitting History this week and am still relishing and pondering.  I’m sorry I never learned to speak Yiddish – a language described as both subversive and deeply expressive.  You’ve got to love a language that has so many words for nerd, and in which kvetching approaches an art form.
I’m still thinking about some of the many interesting people Lansky describes.  One of my favorites is Mrs. Orloff and the story she told about a neighbor and friend she used to have who was a Yiddish actress.  Bella Ballerina had once been in a play on where she portrayed a Jewish woman who abandoned her children to run off with another man:
“For years after that she couldn’t walk down the street without people yelling at her and spitting, ‘Feh!’ they would say, ‘leaving three little children like that.  How could you do such a thing?’”
I learned that Sholem Aleichem, probably the most famous of Yiddish writers (everyone is familiar with him at least indirectly because it was his story of Tevye the Milkman upon which Fiddler on the Roof was based), is buried in the Workmen’s Circle cemetery in .  When I was in I went to look for Karl Marx’s grave in .  I would have looked for Sholem Aleichem in if I had known.
Lansky works with one woman whose war years resemble those of my parents.  In her case, she “had fled to no-man’s land on the Soviet frontier, eluded the border guards, suffered in Siberia, escaped to , and after the war, made her way to by way of .”  My parents had also fled the Germans to end up with the Soviets, suffered in Siberia, stayed some time in Kazakhstan, and after the war, made their way to New York by way of France and the Dominican Republic.
Lansky, in his book rescue work, found that Jews see in Yiddish what they want to see:
“For atheists it was Jewishness without religion; for feminists, Judaism free from patriarchy; for those uncomfortable with Israeli politics, nationalism without Zionism; for socialists, the voice of proletarian struggle…  Although there was truth in each of these characterizations, they remained fragmentary at best; those who espoused them had rarely read deeply in what was, after all, an incredibly rich and multifaceted literature.”
Then there’s Tevye who, in Sholem Aleichem’s story, has an argument with his daughter Chava.  Chava is in love with a Russian peasant – a goy, telling her father that God created all men equal.  This does not please Tevye who employs his usual manner of quoting from holy sources to make his point.  His wife Golda interrupts to say that they have done enough talking out there and that the borscht is ready and on the table.  Tevye replies disparagingly “We are discussing important matters and she comes barging in with her milkhiger (dairy) borscht.”  “My milkhiger borsht,” Golda retorts, “may be just as important as all those important matters of yours.”
Lansky notes that “In the end, Golda suggests, it’s borscht, more than Hebrew quotations, that will hold the Jewish people together.”
I have never read deeply, I’ve hardly read Yiddish literature at all.  And yet I believe Yiddish is important and I’m grateful that others are working to save and revive it.  Me, I’m with Golda.  Borscht, bagels lox and cream cheese, potato latkes, chicken soup with knaidlach.  Culture isn’t only literature.  Golda had a good point.
Culture incorporates more than literature and food.  Music is an important part of Jewish cultural history.  There are some wonderful CDs here in my shop.  Or check out the Lansky or other books.
Posted by Dvora at 8:10 PM No comments: