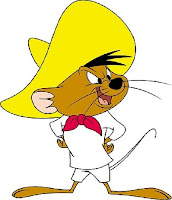 First, there was the headline in a newspaper.  French drivers speeding in Spain will now be fined.  This is new?  Why wouldn’t they be fined before?


Then the details: Spain and France have signed an agreement and starting that day (1 August) each country will release to the other the address of the owner of a car caught speeding on radar, thus allowing that country to send the notice of a fine in the mail.  For very serious infractions of the speed laws, driver license suspension or prison penalties may also be applied.  The countries will collaborate.


Now I understand a little better why I never see any police cars or planes patrolling the highways.  It's all done with radar.  The radars are announced in advance so that if you’re not a total idiot, you can slow down and then go back to speeding once you’ve passed by; although surprisingly, many people don’t do that.  There are also stationary controls of police that wave you over where you might be tested for drugs or alcohol levels.


Apparently, up until now, everyone knew that when they crossed the border, they were immune from fines.  Even if caught on radar, nothing would happen.  In November this exchange of information will be available to all the countries of the EU.  Will it make the highways any safer?  I’m not convinced.  But it could bring some extra cash into government coffers.  Maybe that’s why this novel idea of actually collecting fines has been approved.

Yet it’s interesting how so many Spanish drivers break the speed limits, and not by a little.  Do they get fined?  If only the drivers I see speeding were fined, this could raise mucho dinero for the empty public coffers.  On my recent drive in France, I noticed how, for the most part, the traffic moved together.  I think I passed more cars than passed me, and I wasn’t exceeding the limit.  That never ever happens in Spain.  I rarely pass a car here – only trucks, and I’ve never had the experience of moving along together with the cars around me except in deep, dense traffic.  What happens often is that I’m passed by drivers who zip by, passing me as if I were standing still.  If Speedy Gonzales was Mexican, his granddad was Spanish.

Email ThisBlogThis!Share to TwitterShare to FacebookShare to Pinterest
Labels: driving in Spain