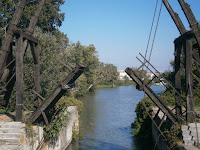 As is sometimes the case when I travel, this year’s vacation included a pilgrimage.  Most years my vacation base is Avignon.  Avignon is a hub which makes it convenient for visiting other towns in the area, it has some great restaurants, it’s beautiful, provides for some great walks, and each time I go there it becomes more like a second home, so going there is enjoyable and comfortable.  The fact that it was once the papal seat means nothing to me except that it resulted in the monumental Pope’s Palace.

Arles, however, was always special because Vincent van Gogh lived there for 16 months and created 200 paintings and 100 drawings during that short time.  Many of these paintings are among his most famous.  It was where Gauguin came to live with him – a disaster of a visit that ended in Van Gogh’s mutilating his ear and setting off the series of his worst epileptic fits – what became the beginning of the end for him. 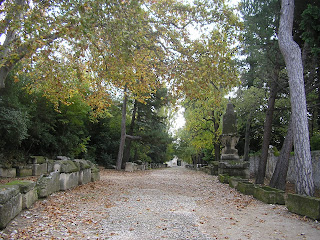 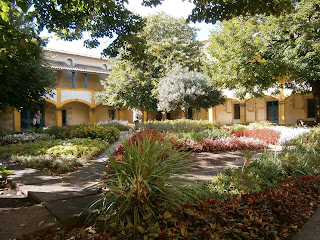 I’ve walked in the Alyscamps, been to what was the hospital where he was treated, walked along the river where he painted his starry night over the Rhone.  Each time I visit, walking into town from the railway station, I pass by the square where his yellow house once stood, and I’ve passed many times by café of the café terrace at night.  What I never managed to do was find the Langlois Bridge – the bridge that he painted four times in oil, once in water color, and drew four times – the bridge that has become an icon. 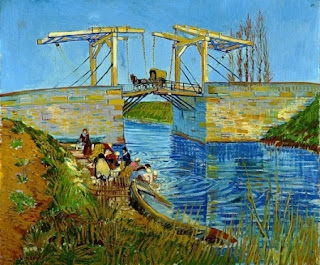 Clearly the bridge sits across a waterway, but the road directions seemed to take you off onto some sort of highway that doesn’t run along the river.  Since I always go to Arles by train, I wanted to walk to the bridge.  I knew it was no longer in its original location, but I didn’t want to navigate along a highway full of traffic to get to it.  So this time I wrote in advance to the Arles tourist office to ask for directions to get there by foot.

I saved my visit to the fabulous Saturday market for after my pilgrimage, passing through it quickly and then off onto the footpath that followed a canal to my destination.  The nice man at the tourist office said would take 30-40 minutes to walk to.

It’s 2.7 kilometers from Arles to the bridge, and it took me almost an hour.  But never mind.  It was a lovely walk along a canal and well worth the time.  Maybe it took me so long because I was constantly stopping to take pictures:  of the canal, of the boats and barges, of the fishermen, and of the old Citroens. 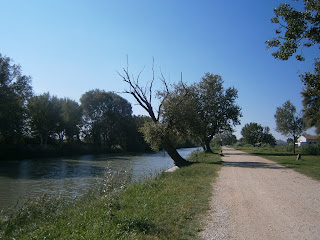 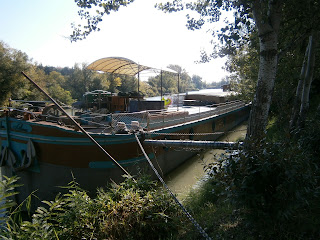 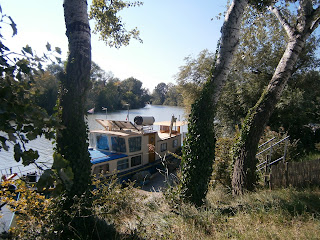 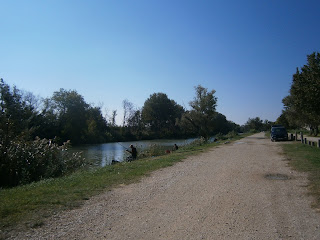 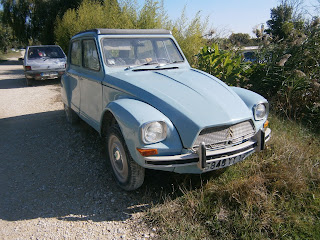 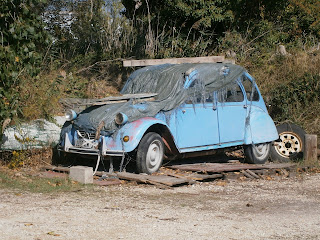 Coming around a bend and seeing the bridge from a distance was an “Oh my goodness” moment. 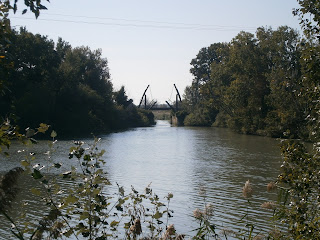 Inspecting it at close quarters was a real pleasure.  No lines, no barriers, almost no people.  There were two young German families there too, so I just about had the place to myself. 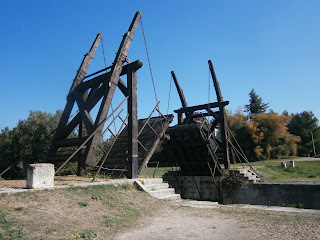 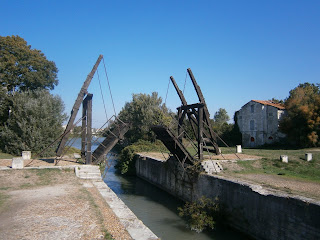 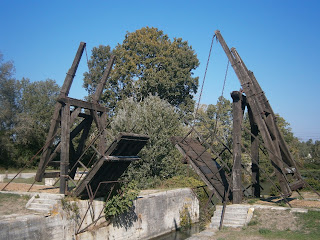 The original bridge was built in the first half of the 19th century as part of a project to expand the networks of canals that go to the Mediterranean.  That was replaced in 1930 by a reinforced concrete bridge that in 1944, along with all but one of the other bridges along the canal, was blown up by the Germans.  The only surviving bridge was moved in 1959 to the site along the canal, a little outside of Arles, where it now sits and where people like me come to pay their respect.
Posted by Dvora at 10:23 PM