The Via Catalana for Independence 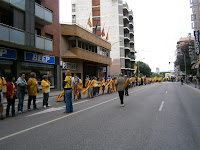 When I first came to Catalunya in 2001, not many people spoke of independence.  And yet even then I could see that Catalunya was swimming against the tide that Madrid imposed on it.


Some people think that because of the poor economy, Catalans are now much more interested in independence from Spain.  And I think that for many, it is about money.  And why not?  They get taxed and get less back proportionately than Spanish citizens in the other parts of Spain.  They drive on toll highways when in other parts they drive for free.  They get less money per student for scholarships than other parts of Spain.  Those are only two examples.  They are being impoverished so that other Spaniards can live better than they do.  It isn’t a matter of not showing solidarity, but of being ripped off in an unfair system.


But money isn’t the only thing.  The attacks on Catalan culture and its language have become more intense and more frequent to the point where a large number of people have had enough and now feel they have to defend their identity.


And so, last year on Catalunya’s National Day, La Diada, there was a demonstration in support of Catalan independence that 1.5 million people attended in Barcelona.  This year, there was another, bigger demonstration when 1.6 million people joined hands in the Via Catalana for Independence, the human chain that stretched along the length of Catalunya from France to the border with Valencia.


The logistics of organizing such a massive demonstration boggles the mind.  There are 400 kilometers to cover.  You don’t want everyone massed in urban areas like Barcelona while other lightly populated areas remain empty.  Therefore you need to convince people from the large urban centers to displace to the rural ones.  And you need to allow them to get there and get back.  But the demonstration will take place along streets, roads, and highways.  And those streets, roads, and highways have to be closed when the thousands of people arrive and stand along them.  They can’t just arrive and then leave.  It will take time to get everyone in their place.


You want to get photos.  Besides the important public relations that the visual images will provide, you want to be sure to have proof of numbers when the government in Madrid says, after it’s all over, that only 400,000 thousand people participated.  Which we all knew ahead of time they would do, and which of course they did.  But now there are enough images to prove how massive the demonstration really was.


Photos and videos were organized on the ground.  Every section of 500 meters had several volunteer organizers including photographers.  Just before the actual start time, the photographers took photos, every few feet, of their section.  Those photos will be joined together to produce a mega photo of the event.  The event was also covered by video taken from helicopters.


This year’s Via Catalana for Independence was organized by the same group that organized last year’s massive demonstration in Barcelona.  The Assemblea Nacional Catalana (ANC) is a grassroots movement led by the most amazing woman, Carme Forcadell.  The ANC thought of everything. 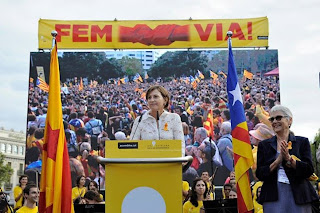 They asked people to sign up in advance and assigned participants to numbered sections, based on where they lived, and how far they were willing to displace.  This enabled them to organize things so that people from urban areas and places where the Via would not pass, would go to the rural areas, near their town or in the south of Catalunya where the population is very sparse.  They organized buses so that as few private cars as possible would be used.  They organized parking for those who drove.  They arranged with the Catalan government and police to have the streets, roads, and highways where the chain would pass closed beginning 4 pm and remain closed until 6 when the demonstration would end.  They arranged that tolls would not be charged during the period when drivers had no other option because of the secondary roads being closed for the demonstration.


The chain was not always a straight line.  In Barcelona it went over, under, around, and through several parts of the city, passing by the Palau de la Generalitat (the Catalan government seat), the Catalan Parliament building, the Sagrada Familia, and the Camp Nou football field.  Even so, photos show that the most emblematic spots were not a chain but a mass of people. 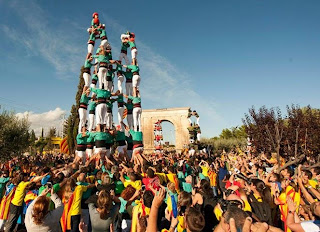 In anticipation of this immense influx of people, the whole center of Barcelona was closed to any kind of traffic (except emergency services) during the afternoon.  No cars, taxis, or buses (neither public transportation nor tourist buses).  If you wanted to get around Barcelona that afternoon, you could walk or take the metro.


They organized photographers on the ground and in the air.  They made yellow t-shirts because yellow would stand out well in photos and the chain would look more united.   (But in fact, there were so many Catalan independence flags being worn and draped and waved, that you could hardly see the t-shirts!)


11 September is La Diada, Catalunya’s National Day.  The official time of the human chain was 17:14, to commemorate the year in which the Catalans were defeated in the War of Spanish Succession on 11 September 1714.  We were told to arrive one hour or more before the start time and check in at the information table that had been set up for each of the 800 sections.   Each section of 500 meters had a table, a marker with the section number (mine was section 674), with several volunteers.  There one of the organizers told us approximately where to place ourselves, within our section so that we wouldn’t all be bunched together.


At 4 pm when the road was closed, we had a rehearsal so that we could adjust our positions.  Later there was another rehearsal so that the mega photo could be shot.  Then, at 17:14, the church bells rang out and we all held hands.


The human chain stretched for 400 kilometers (about 250 miles), through 86 municipalities.  There were more than 500,000 demonstrators in Barcelona alone.  Sixty thousand people from heavily populated areas and towns not on the chain route made their way to the south of Catalunya to be in the chain there, where the population is sparse.  Thirty thousand volunteers worked to place us, photograph us, and make sure that everything went smoothly on the day.  One million six hundred thousand people made the chain.  One of them, Montserrat Sans, is 102 years old and was the oldest participant at the Via Catalana on Wednesday.


It was a massive demonstration of people who want the right to vote on a referendum, something you would think was a basic right in any democratic country.  And yet today, two days after the event, the Spanish government has said that a referendum is illegal and therefore not possible. 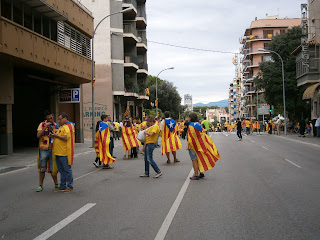 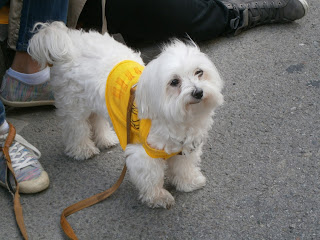 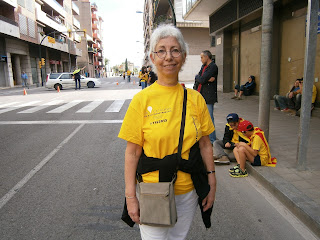 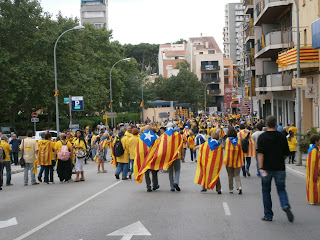 Here's a lovely video that gives you a good sense of the festive feel of the demonstration
http://www.youtube.com/watch?v=vdwJjdRDc60

And here's another video that shows the large variety of people who participated.  It also gives you a good opportunity to hear Catalan spoken, in case you never have.
http://www.youtube.com/watch?v=y8IjH50TMck&sns=tw

All photos are mine with the exception of the one of Carme Forcadell, the castells at Tarragona, and the aerial view.
Posted by Dvora at 8:27 PM