It was my dream to move to France when I sold my villa, but it turned out to be impossible.  Well, maybe I could have arranged it, but it was so complicated and so uncertain that I couldn’t take the risk -- not at my age and with my limited resources.


When I realized that I wasn’t going to be able to move to France, I started thinking about where in Catalunya I would move to and settled on Figueres.  I didn’t want to be in one of those coastal towns that is flooded with sun-burned bodies in the summer and dead in the winter.  I wanted a place not too big and overwhelming, and not too small and claustrophobic.   I wanted good public transportation to be available so I wouldn’t have to use my car for every outing or even just to buy bread.  Figueres fits all the above plus it is only 20 kilometers from the French border, so I figured if I can’t live in France, at least I can go to visit, and living that close I could even visit on daytrips.


Finally, after being here for over a month, I got up my courage to test the trains and see if the odd connections would work.  They are odd (and this took some probing to find out) because on the way there you take the regional to the last stop, which is Cerbere, the first town on the train line in France.  But on your return you pass Cerbere and take the French regional to its last stop, which is Portbou, the first town on the train line in Spain.  It’s a little asymmetrical and tricky for getting round trip tickets on either the Spanish or the French trains, but once you know how it works, it’s easy.


I didn’t have any specific expectations for Perpignan.  Some Brits I know said it was pretty much like Catalan towns.  Historically, the Rousillon was part of Catalunya, some still think of it as Catalunya North and some people there speak Catalan.


The natural landscape doesn’t change much when you cross the border except that in Spain there were a few vineyards while in France vineyards dominated the landscape, sloping in every which direction.  While the natural landscape was similar, I think that French towns are distinctly different.  Perpignan certainly is.  In Perpignan, there is no mistaking that you’re in France. 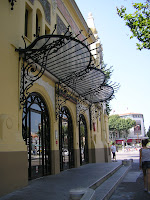 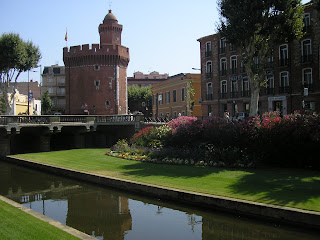 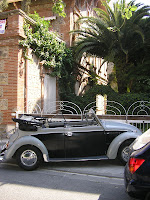 Houses look different, and even the little cars seemed to have an extra touch of je ne sais quoi.  Figueres boasts a beautiful promenade along the canalized River Basse.  I had done no homework, wanting to just get there, explore, and be surprised.  And I was surprised.  There is nothing that looks like this in Catalunya, at least nothing I’ve ever seen.


I was also surprised at how mediocre my lunch was.  I looked for something other than one of those brasseries with the large patio out front designed to entrap tourists but couldn’t find anything better.  So I went to one and ordered their special seafood tasting menu, which had I-forget-how-many different parts.  Unfortunately rather than being served in courses they were brought to the table all at once and all, except the bread with tomato and anchovies vinaigrette (a remnant of Catalunya cuisine) was boring and deeply disappointing.


But that’s OK.  There are two types of travelers:  those who research first and plan out the visit, and those who just go and see what they find. Both have their merit, and I have a little of both in me.  So when I know I’m going to a place that I will likely visit again, I can indulge both approaches.  On my next trip, I’ll definitely research restaurants before I go.  In fact, I've already started. 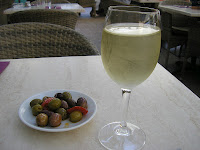