Miravet and the Templar Knights 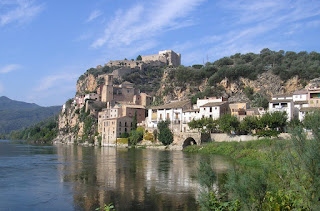 I’ve always thought that Jesuits, Franciscans, Dominicans, Carthusians, and the other monastic orders of the Catholic Church consisted of monks who, if they weren’t involved in teaching, lived in monasteries where they studied, sang, meditated, prayed, grew herbs, and made wine and medicinal green liqueur. I never knew there were Catholic monastic orders that were military until I moved to Spain. I thought that the knights in the crusades were handsome men who wrote poetry and fought to support their lord or their king. Men like Sean Connery.


It was on my first visit to Miravet, a tiny village on the banks of the Ebro River, that I discovered the Knights Templar – my first encounter with warrior knights. Of course the Templars no longer survive, at least not as an order of the Catholic Church. My encounter with them was in the physical ruins of what once was their glory.

Formed in the 12th century to protect the Jerusalem pilgrimage, the Templar Knights were the most skilled of the different orders of fighting monks. Little did I know, in the 1970s when I was watching The Saint on T.V. and admiring his Volvo P1800, what inspired Simon Templar’s name.

As their fame grew, the Templars instituted a system whereby travelers, rather than carry it with them on the journey, could put their wealth in the possession of Templars who would give the traveler a letter of credit which he could then redeem from other Templars when he reached the Holy Land. This and other financial arrangements eventually made them the most powerful and rich of all the monastic orders – so rich, in fact, that the King of France was so heavily indebted to them that he jumped at the chance to participate in their undoing and escape his debt.

The monasteries of the Templars were often fortresses, and the castle of Miravet is one such example. Castles, I’ve learned, were always defensive structures, usually incorporating a large yard where those who lived outside its walls but within its jurisdiction could come for protection in case of attack, whereas the dwellings where lords and kings could enjoy their wealth without resorting to defense were palaces. 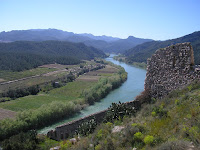 The Miravet castle isn’t especially well-preserved, so you only get a rudimentary idea of what it might have been like when it was actually lived in. There is no example of a cell or dormitory, although you can see where the church, refectory, and stables were. From the grounds and even more so from atop the tower, you have an impressive view of the surrounding area for many miles around. In those days, the Ebro River was a major waterway for seafaring ships, so this location must have had strategic importance. And in fact, before Templars owned it, it was a Moorish castle. 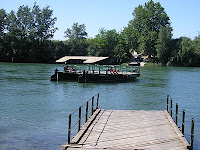 One of the best parts of the visit to Miravet is crossing the Ebro River to get there. The closest bridge is several miles away in either direction, but you can cross directly from the opposite bank with a ferry. This ferry operates by means of the current, using cords attached to pulleys that are attached to a line that crosses the river and keeps the boat on course. This is the same system that has been used here for hundreds of years. It can carry several passengers and up to three cars at a time, making the trip across, silently, in about five minutes. The cost is 3 euros per car. Entry to the castle is 3 euros per person, free on Tuesdays.

Miravet website (in Catalan): http://www.miravet.altanet.org/
Posted by Dvora at 5:26 PM