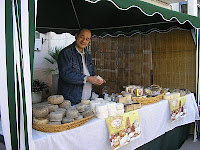 In the village of Rasquera, between here and Miravet, on the first weekend of May every year they hold their annual Fira Ramadera, which is a livestock fair. Marking the time when the flocks head for the Cardó and Tivissa mountains, and locally known as the goat fair, it captured my attention because where there is goat, they may also be goat cheese.


Ramat means livestock, and although Catalunya has dairy and beef industries, they are located in the north (Girona), and west (Lleida). Here, in the more arid south, you find pigs, goats, and sheep. In Catalunya (and maybe all of Spain) most of the livestock industry is relatively small scale and family run. I recently read in Temple Grandin’s book Animals Make Us Human that Europe does much better in providing decent living and slaughter conditions for its commercial animals (with the exception of chickens) than the U.S. does. And in fact, that fits with my own general impression. Although they may exist, in all the nine years that I’ve lived here I have never seen huge stockyards here like the ones in Coalinga in central California, and when there is a news story having to do with livestock, you always see a relatively small, family-run business.

Herding goats or sheep is not a big money-maker and even though there are many people who are not driven to get rich, as time goes by, fewer people are doing it, especially fewer young people. To give the vocation a boost, the Generalitat has recently instituted programs to train young people so that those herders who do not have children to take over, might find a stranger to do it when the time comes and thus the landscape will remain dotted with sheep and goats and the food supply will continue to be locally produced. 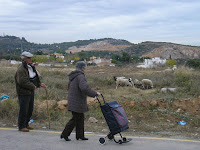 One of the more charming things about Catalunya is that there are shepherds and goatherds with small flocks, sometimes going this way and that along the roads. You might see them when you drive outside the cities, and I could even see them out the window from our apartment in Tarragona, being situated as we were near the edge of town. There are also a few small herds on the outer fringe of Barcelona, sometimes taken by their shepherds to graze in the large open space park of Collserola that borders the back of the city, as Tilden Park does in Berkeley. Pigs are a different story. They are always located outside of town, but I have felt the odor in town when the wind was blowing the wrong way.

The oldest signs of human life at Rasquera are the 6,500 – 10,000-year-old cave paintings. It was an Iberian settlement before the Romans came, and its first civic document dates from 1153 when Ramon Berenguer IV gave Rasquera to the Templars, whose castle was in Miravet. Increasing from its first recorded population of 14 souls in 1497, it rose to its height of 1542 people in 1910 and has eased back down to 955 at the latest count. It’s primary economic activity is agriculture: vineyards, olive trees, some fruit trees (it is typical of the houses in the village to have open attics for the drying of figs), and breeding and raising of goats and sheep, most notably the Cabra Blanca (white goat), a breed native to Rasquera. 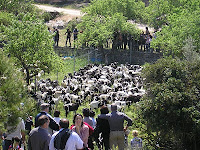 In Rasquera, before leaving for their summer pasture, the animals are herded into pens at the edge of the village, and people come from all around to admire them. In addition to the gathering of the flocks and display of a few prime examples in individual pens, there was also a section at the fair for artisan products, both food and handcrafts. Of course I was mostly interested in the stands with artisan-made goat cheeses. Spain has a lot of wonderful food, but it does not produce nor offer a wide selection of cheeses. Spanish varieties are few -- usually hard cheeses -- and they import almost none. So, while I love spotting the sheep and goats when I’m out and about in Catalunya, and I love the feeling they give me of an earlier time and a more simple life, I do miss the countless wonderful cheeses from the Cheeseboard in Berkeley.
Posted by Dvora at 10:33 PM