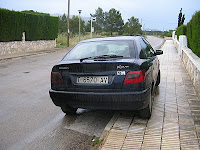 My first few years in Spain I didn’t have a car. I never would have thought that I could live without one, much less be happy. But in fact, I didn’t miss it. Living in a city, I could take public transportation to all the places I couldn’t walk to, and on a rare occasion it was easy to get a taxi. However, when you live out in the middle of nowhere you need a car to get somewhere, and so we bought one, a Seat Ibiza.


The Seat served us well. It was a cheap small car that ran on diesel (most vehicles here do) and was economical to run and to maintain. Seat is a Spanish company and the Ibiza, bottom of their line, is probably the most popular car here. Its styling doesn’t noticeably change from year to year (like the old Volvo 122S) and its only drawback is that unlike the Volvo, you don’t get the feeling that it offers much protection on the road. 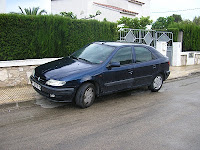 In January 2009 we bought our present car, an 11-year-old Citroen Xsara that replaced the 11-year-old Seat that Manuel killed one rainy day when he plowed through a deep puddle. The Citroen is a larger car that also runs on diesel. Unfortunately, the Xsara does not have the charm or character of my favorite 2CV, and ours is a bit of a heap. It’s a heap because it burns oil although our mechanic tells me that it doesn’t. Thing is, as many times as I’ve asked him, I still don’t understand his explanation of what is happening to the oil.

The car blows black smoke out the back when I accelerate and it constantly sends burning fumes into the passenger compartment. I have it parked in front of my house a lot of the time (Manuel and I share the car, so it is also parked in front of his house a lot of the time), but it leaves no oil spots on the concrete. And yet, we use up about two liters of oil every four weeks. If it isn’t burning oil and it isn’t leaking, where does the oil go? The mechanic says it loses oil because I don’t drive fast enough.

The other problem with the car is that we only have one key for it. When we first bought it, a year and a half ago, we asked Jeroni, our mechanic, to get us a duplicate. He said he would order one from Citroen, but during the first year of our car ownership he didn’t. Eventually we nagged enough for him to take the car serial number and get us a key – a blank that had to be taken to a Citroen dealer in order to be made to work. It wasn’t simply a matter of having it cut, something electronic was also involved. He told us there was a dealer in L’Amposta, but L’Amposta is about half an hour away and not on any of our usual routes. 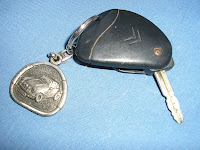 Then, two months ago, Manuel lost our one and only key. He had been pulling a few weeds in his garden, throwing them over the wall onto the abandoned lot next door, and in one of his throws, he let go of the key that for some unfathomable reason he had in his weed-pulling hand. Because I have the useful aptitude for finding things, he called me. Usually it is just a matter of applying logic: when and where was the last time you saw or used it? Where would you be likely to have put it? Other times it is simply my ability to see what is sitting right in front of me.

Manuel knew where he was when he made the fateful throw, so there was only a relatively small area where the key could have landed. But that area was full of tall bushes, huge weeds, and little mountains of building debris piled onto debris. We looked and looked, but it was hopeless. Even I, the great lost objects sleuth, couldn’t find it, and I walked back home with the unhappy feeling that, because our key was not so straightforward to copy, we were in for a big problem.

Manuel said he would ask his neighbors, who have two teenage children, to help him look the next morning. Maybe all that boundless energy and youthful eyesight would yield better results. Next morning I was waiting for him to call when he suddenly showed up…. smiling. Success! And he did it all on his own. He applied logic and calculation, narrowed down the area, and took a good look in the spot where it had to be, and there it was!

This was the incident that convinced me that procrastination was no longer an acceptable policy, and that Monday we went in with our blank to ask Jeroni where the Citroen dealer was that we had to go to. But now he told us that if we waited until the next time we had the car serviced and left the key with him for the day, he would get it done. So a couple of weeks later that is what we did. Only it turned out that he couldn’t get it done, and we had to go to the dealer after all. Did we still have the code on the little piece of paper that he had given us when he gave us the blank? What the heck. Manuel said he was never given any little piece of paper, only the key. Jeroni insisted that yes, and we persisted that no, and finally we went to the Citroen dealer, the one in Tortosa, a place we are familiar with, taking along our blank with no little piece of coded paper.

At the Citroen service department we were attended by the service manager and then taken to the waiting lounge. After about twenty minutes, they came to get us. They couldn’t use the blank we had; it was the wrong one for that car. But our mechanic got it for us from Citroen. He had given them the car’s serial number. That could be, but he probably bought it from a parts supplier and not from the company and in any case, while it was the right key for the physical lock, it was the wrong key for the electronic control. “See this little blue spot? It should be black.” Surely they jest.

The service manager told us they would order the correct blank (one with a little black spot) and we could return the key we had to our mechanic and ask for our money back. They would have the new blank in two days and we should call before coming back for an appointment.

I called last Tuesday and went in on Wednesday. I didn’t even get the chance to sit down in that nice, clean waiting lounge. Their mechanic took the blank that they had ordered for us and my original key, gave them a good look, and declared that they could not make a copy with that blank. It might be the right key for the electronics, but it was the wrong shape for the mechanical and couldn’t be copied from my original, I think because the stem is too short. Did I have that other blank that didn’t work? They could copy the mechanical from that.

You have to be kidding. The service manager told us that we could send the other key back. In fact we hadn’t done anything with it (that’s not surprising, is it), but I hadn’t brought it with me either, seeing that it was useless. The manager was there, looking a bit sheepish. The whole thing seemed so ridiculous to me that I didn’t even get angry. How absurd. I’ve never had a car before that was so complicated. I’ve only ever had keys that open mechanical locks and then turned on the engine. They told me that this newfangled system was designed in order to protect me. Well hey, protect me from progress. Sometimes newer isn’t better. Basically, when you drive an old heap, you don’t spend much time worrying about your car being stolen. And what if we hadn’t found our key? Would we have had to buy a whole new engine?

I will go back next week, taking the useless blank with me, and maybe, after a year and a half, I will drive out with a spare key that works.
Posted by Dvora at 8:26 PM

Email ThisBlogThis!Share to TwitterShare to FacebookShare to Pinterest
Labels: Citroen