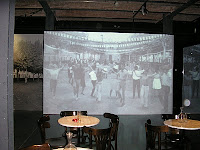 by Frances Mayes. Everyone liked the book

, but not everyone liked the film

. As often happens, the film wasn’t true to the book. In fact, I would say that in this case, the film had almost nothing to do with the book except that in both an American woman buys a villa in Tuscany and proceeds to fix it up. And, truth be told, I liked the film even more than I liked the book.


In the book, Frances buys a villa in Tuscany intending to fix it and then use it for extended stays. The people she meets and the stories she tells are engaging, but she is there as a visitor, albeit an habitué. On the other hand, in the movie, Frances actually abandons the U.S. and moves to Italy. I can identify with that. It is one thing to have enough money to buy a villa somewhere pretty and fix it up beautifully so that you can go there to enjoy vacations or spend your sabbaticals; and quite another to haul yourself to a new country, leaving behind your old life to start a new one where you don’t know anyone and you don’t know the language. This Frances wasn’t a habitué; she was an expat or an immigrant.

The movie offered me much to identify with. The very appealing Polish workers who remodel Frances’s villa add to the complexity of Frances’s life because now, besides having to learn Italian, she tries to learn some Polish too. The electrician who did some work for me in Barcelona was Argentine and spoke a totally strange and unusual form of Spanish. My cleaning lady is Russian. She speaks to me in rudimentary Spanish and I speak to her in Catalan and we manage to understand each other – more or less. The guy I bought firewood from in October is Moroccan. He doesn’t speak Catalan but does speak a little English which becomes poorer when it comes time for him to do something he was paid for but hasn’t done. My next door neighbors are Swiss and speak only German. Our verbal exchanges are very, very limited. You don’t expect to find so many foreigners when you move to another country. You figure that somehow you will surmount the huge hurdle of becoming functional, hopefully fluent, in a new language, and all of a sudden you find there are many other new languages to contend with.

Adorable Pavel, one of the Poles in the movie, falls in love with the daughter of Frances’s neighbors. But the parents are opposed to the match because Pavel is a foreigner with little hope (in their opinion) of becoming a success and making their daughter happy. When Pavel asks Frances to go with him to talk to his sweetheart’s parents, they state their complaints to the match, ending up with “He has no family.” Frances replies, “Yes he does. I am his family.” I’ve seen the movie five times (I can check it out for free from my local library and most of the other choices are action films) and this part always brings tears to my eyes. I have not achieved that level of friendship.

Practially having made a study of it, the film has me thinking about what it is to be an expat, to be an immigrant, to adopt another country as your home. How far do you go to try to adapt? Generally speaking, even if you learn the language and conform to the customs, you’ll still always be a foreigner. But there are those who really do become part of their new home. Besides fitting in, cooking, shopping, dressing, behaving in the local manner, they also make real friends, not just acquaintances, and even form new families. I am very sorry to say that I have not achieved that. But then, I’m still trying.

Most of the people with whom I socialize here (in the middle of nowhere) are foreigners, like me, who came here from another country. I recently called five of them to conduct a cursory survey of their behavior in adapting to local culture, using their eating and television habits as a guide, and to see if they viewed themselves as expats, immigrants, or both.

In Spain the main meal of the day is lunch, eaten as early as 1 pm, but generally eaten at 2 and sometimes even later. Dinner is at 8 or 9 pm and usually something very light or just a snack. You only need an aerial to receive local television, although now a digital box is also required. Once you have that relatively inexpensive equipment, you can watch several free Spanish and Catalan stations. Many people here, especially foreigners, install satellites to receive TV from their home, European countries. Finally, I inquired into their self perception with regard to their status here. Did they consider themselves expatriates or immigrants and what did those two words mean to them?

First up was a man who told me they ate their main meal in the evening, at around 6 or 6:30 pm. Lunch was at 12 or 1. They did not receive local television. He considered himself an expat because he did not intend to settle here permanently but to stay until about age 70. He didn’t feel that Spain was a good place to be old.

Second was a woman who told me that they ate their main meal in the evening at 7:45; lunch was at 1:15. They sometimes watched the news and/or weather on local television, mostly they watched English TV. She couldn’t easily choose between expat and immigrant and favored “visitor” as describing her status. They were here permanently and had no plans to return to England, but the word immigrant conveyed the image of a person who was sponging off the system, so she didn’t identify with that as they are self sufficient.

One woman told me that their main meal changes from day to day, depending on how they’re feeling. Sometimes it is lunch, at about 1:30, and other times it is dinner, at 6. They receive but do not watch local television. She considers herself an expat. For her, immigrant is a person who has come to stay, while she is a resident here, but could go back, although she has no such plans at the moment.

The next, another woman and the first of my interviewees who understands and speaks Spanish told me that she used to have her main meal in the evening but recently changed that to lunch. Now her evening meal, which she has at 7 pm, is just a snack. She watches very little local television – mainly news and tennis, if it’s on. She thinks of herself as both an expat and an immigrant, although she doesn’t like the term expat because it brings to mind people who sit around and drink gin.

The fifth and last interviewee, another woman who also understands and speaks Spanish, and even writes it well, said they have their main meal in the evening at about 8:30; lunch is usually at 1. They have local as well as satellite television and watch the local for the news and weather. She is an expat. She and her husband had come to Spain as an adventure, not intending to stay. They now have their home on the market to sell and plan to move on.

I asked Manuel what the two words, expat and immigrant meant to him. He left Spain many years ago and went to live in Switzerland for a few years before moving to Panama and eventually the U.S.A. He has lived more of his life as a foreigner than as a native. He said that in Switzerland he was an immigrant because he came looking for work. In Panama he was an expat because he had been sent there to work by Nestle, his employer, putting him into the upper class. In the U.S. he was an immigrant because once again he had come looking for work. I asked him if he thought the two words had social class connotations and he said that yes, he did think so. And that’s what I find in general, that people think better of expats – they are affluent people who have a choice and a higher standing – than of immigrants who are lower or working class and usually just looking for jobs and a better life. In the film, the parents could accept Frances, who they viewed as an affluent expat, whereas they had difficulties with Pavel, a poor Polish immigrant.

I think of expat as moving away from somewhere while immigrant implies moving toward somewhere. For me, an expat is someone who is perched in a new country, possibly but not necessarily learning the new language, forsaking their home but not necessarily adopting the new one as their own. Expats are usually middle or upper middle class people who may or may not have moved to the new country permanently, but their identity and allegiance is still with the old one. Those expats who are of noble birth are emigrés.

I think of an immigrant as someone who has permanently moved to a new country, leaving the old one behind and adopting the ways of the new as much as he can. He learns the language and tries to adapt to the culture and the ways of doing things – to assimilate, but not necessarily to the extent that he abandons his own identity or history. It isn’t easy to be a good immigrant.

What does the dictionary say? In my dictionary, expatriate is defined as: 1. to banish; exile, 2. to withdraw (oneself) from residence in or allegiance to one’s native country, 3. dwelling in a foreign land; exiled. The definition for immigrant is: 1. a person who migrates to another country, usually for permanent residence, 2. an organism found in a new habitat. 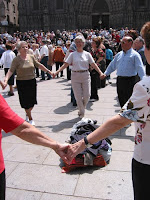 Where do I fit in? I watched only Catalan television -- news, documentaries, dramas, soap operas, and of course soccer -- for the first five years I was here. Not only was it a tool for learning the language, it also gave me insider information on current affairs, culture, history, and customs. When I bought the villa I installed satellite for the British TV that my summer renters expect to have. I feel I’m an expat in that I left my home country willingly and not because I had to. But I am first and foremost an immigrant. I’m here to stay, if not in Spain then at least in Europe. Unlike everyone else I know, I came specifically to Catalunya and not to Spain and so my efforts to learn and adapt have been locally focused. I have learned the Catalan language and a lot about Catalan culture and history. I’ve invested myself in Catalunya. If I ever move to France, I’ll be probably be an expat there and not an immigrant. I will learn French as best I can (and try to dress better), but I doubt I will make the same effort to become French as I did to become Catalan.
Posted by Dvora at 7:20 PM