In the last few weeks I’ve had a very lively time with three great sets of visitors, starting with Bill and his wife Anita, who came in mid-June accompanied by friends of theirs. I’ve known Bill since 1977 when he entered the undergraduate program to study photography and I was working at UC Berkeley’s College of Environmental Design. He and I had Los Angeles in common, and over the years we would sometimes drive down to L.A. together to visit our respective friends and families, poor six-foot tall Bill with a delicate back scrunched into my low-flying Volvo P1800.


Many years ago when Anita still lived in Germany, she was planning a trip with another couple and advertised in the local paper for a traveling companion. Dorith, recently divorced and wanting to travel was putting an ad in the same paper but missed the deadline. Later, when Dorith was reading through a copy, she found her own ad, only it had been placed by someone else. The two of them have been traveling companions and good friends ever since.

We started out with the great city market La Boqueria where the fruits and veggies are set out like works of art; then we made our way through the Barri Gotic, the old part of town where I used to live. Anita had read The Shadow of the Wind

, so she was very pleased to be able to visit two locations mentioned in the book: the lovely Plaça Reial where the ethereal (and blind) Clara Barceló lived in a beautiful 19th century apartment, and the Plaça de Sant Felip Neri where the character, whose name I have forgotten, the woman who worked for Julian’s publisher used to live. The Plaça de Sant Felip Neri is a romantic, tiny square, and one of my favorite spots in the city. It sits over what was once a medieval cemetery, but more notable are the walls of the Església Sant Neri, marred by countless chips from where the bullets of firing squads struck when Franco troops executed people during the Spanish Civil War.

I had booked a table at one of my favorite Barcelona restaurants, Agut on Carrer Gignas. The German visitors were pleased. Not only did it have a good review in their guidebook, but the name that means “Oh good!” in German was an auspicious sign. Anita had the menu del dia but the rest of us ordered a la carte. I had grilled baby squid with blood sausage sauce that may sound a bit over the top, but was wonderful, the sauce being tasty but mild and not overpowering the squid.

A few days after I saw Bill I went back into Barcelona to see Sue and her mom. I also know Sue from Cal where she also studied photography and in fact, Bill and Sue vaguely know each other. When I knew Sue at Cal she was making a name for herself as a rodeo photographer. One of the pictures I have of hers is a shot of three cowboys, sitting on a bench, waiting their turn to compete while laughing and having a good time. It is a wonderful image of camaraderie that I have always kept on the wall of my dining room.

Sue’s mom is in her 70s and is in the process of taking a cruise with each one of her three daughters. The first was a river cruise down the Elbe River from Berlin to Prague; later she will sail through the Panama Canal. Her cruise with Sue started from Barcelona, going down the Spanish coast to Gibraltar and then up the other side to Rouen, stopping at Valencia, Cadiz, Lisbon, Oporto, La Coruña, Bilbao, Bordeaux, Guernsey. They came a few days early to see Barcelona and especially some of Gaudí’s buildings. 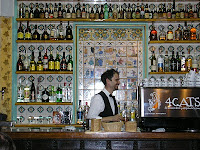 By the time we got out of their hotel it was late, so we set off walking to the old part of town for lunch at an historic artist hangout. The 4 Gats looks like it says the 4 Cats, and oddly enough it does, the Catalan word for cat being gat. This is neat because that way, even if you misread the name, you’re still right. Designed by Josep Puig i Caldafalch, a contemporary of Antoni Gaudí, it is a colorful restaurant and bar loaded with tiles on the walls and an old fashioned feel and was where all the artists (including Picasso) hung out in the early 20th century. It is very popular with tourists but I think locals like it too; it’s a good place to enjoy some nostalgia and decent food. 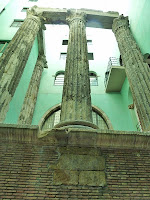 During lunch Mom asked if I knew where there were some Roman columns standing within an office building. She had seen it many years ago and wouldn’t mind another look. It just so happened that I did know, so after lunch we went there. The two thousand-year-old Roman columns, from what was the Temple of Augustus, now sit in an interior courtyard of a building only a few hundred years old, on a tiny, narrow street, off the beaten track. Even as you enter the building entry courtyard, you don’t see the columns; you must go to the back and turn before they come into view. We entered, we turned, we stepped into the inner sanctum, and Sue fell. She was so busy looking up and taking photos that she didn’t see the three stairs that led down to the bottom of the courtyard. There she was, head near the ground, feet up towards us. Her mom and I started towards her to help her up but Mom didn’t notice that we were standing on a ledge – there was no railing. Next thing, Mom went off the three-foot cliff onto the concrete floor below.

I didn’t know what to do first: help Sue up, get down to the level below to see to her mother, or call an ambulance. A couple of French tourists came to help us and in the end, both the women were all right. Unbelievable. These two women may have difficulty staying on their feet, but they’re tough. After resting for a while, they decided they were not up for the walk back to the hotel, so they climbed into a taxi and set off to collect their luggage and then head for the port and their cruise ship. Sue told me later that her mom took another fall at Gibraltar. She wasn’t seriously hurt there either but she bled a lot and was attended to by the very cute ship’s doctor.

The week after Sue’s visit, Shelley came. I first knew Shelley in Los Angeles when she was probably about 12 and I was 18 and her counselor in a Jewish youth organization. Now, some 45 years later, she is a lovely woman with grown children. She was here with her husband and daughter and another couple with their daughter. The two daughters had been studying in Spain.

We met on Passeig de Gracia and since it wasn’t yet time for lunch but people were hungry, we walked down to the Boqueria where they bought somewhat expensive prepared, cut up fruit and I got a strawberry and coconut juice smoothie. There are many stands now in the Boqueria that cater to tourists and sell this kind of thing, where just a few years ago, when I first moved here, there wasn’t even one. But once you work your way in past the entrance, it is still the same old wonderful market with an impressive variety of fruit, vegetables, fish and seafood, meat, and all manner of edibles all beautifully laid out. 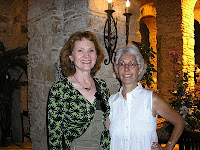 Hunger abated, we walked a little around the Barri Gotic before heading off for lunch. We went to what was once the mikvah (ritual baths), now a back room in an upscale furniture and tchotchkes store, and then to where the main Jewish synagogue of Barcelona once was. This is the area that was the ghetto before the Jews were thrown out. There is something sad in that; you get a feeling of something lost. And the fact is that where I used to live was also in the ghetto, although it took a while before I found that out; the original ghetto ended at a street about two blocks away. But at some point the ghetto was enlarged and our apartment was within that area. My mother used to say that she thought she descended from Spanish Jews. But as far as I know, that was because she looked Spanish rather than because of any information or legend passed down through her family. Still, that area of Barcelona gives me a feeling of connecting with my past, even though it is unlikely that my past took place there.

The Barri Gotic is a wonderful part of the city that gives me the feeling when I walk the streets that I have gone back in time. The streets are very narrow – like alleyways many of them – and some of the stone buildings have settled so that they lean – precariously, you could say -- lending an air of claustrophobia to those walking below. I enjoy being in a place where history is not only in books, but in the streets. People have been living stacked up in these apartment buildings for many hundreds of years. The building where we used to live was about three hundred years old. The entry and stairway looked worn and shabby, but the apartments, with their tall ceilings and French door windows, the beamed ceilings, and the wonderful tiled floors of those apartments that had not been modernized were beautiful. Our apartment had been modernized and we no longer had the pretty old checkerboard floor (that you could see in one tiny space that had been closeted over, and the windows were now aluminum), but the twelve-foot high beamed ceiling remained. 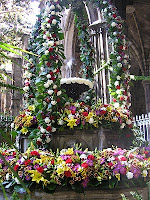 Shelley and the group wanted the option of the best food, so we went for lunch to Agut where I once again ordered those marvelous little calamaris with the blood sausage sauce. Some of the others were a little put off, but when they tasted mine, they agreed that it was wonderful. After an excellent meal we walked back into the Barri Gotic, heading for the Plaça Sant Jaume, and it just so happened that the city hall had all its special rooms open for public viewing, as part of the city celebration of Corpus. I had to keep reassuring my guests that what looked like a museum was a real, functioning city hall. In the entry, the city giants and some of the bestiary was on view because of the holiday where they would be paraded around town as part of the celebration. Later, Shelley and I went into a couple of the medieval courtyards where the Ou com balla, or dancing egg, a Barcelona tradition for Corpus and Christmas, was on display, bouncing on top of a jet stream in ancient fountains decorated with fresh flowers. 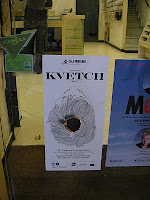 Being with Shelley, Joanne, and the rest of her group was comforting – a bit like corresponding with Irene. They all live in Berkeley, my home town (I adopted it) and a place I will always identify with. We seemed to have a lot in common, and we didn’t just talk, we schmoozed. Lots of Yiddish words peppered our day, giving me a very pleasant sensation of familiarity.