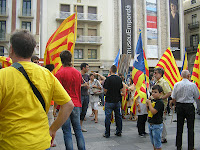 The movement for Catalan Independence from Spain is growing.  I thought that would be a good idea soon after I first moved here in 2001 when the movement was much smaller than it is today.  It’s obvious that the Catalans have the own language, culture, and history, and being part of Spain they have difficulty enjoying and expressing them.  But culture aside, it only took a few months of life here to see that I and everyone who lives, works, or does business here would be better off if Catalunya were an independent state and not part of Spain.


Once I started to get the hang of the language, I could see, watching the news, that Catalan business and the Catalan economy was suffering under Spain.  To do business here meant paying for tolls on roads that are mostly free in the rest of Spain.  To import merchandise into the port of Barcelona meant, in some cases, having to wait extra days for the paperwork to go to Customs in Madrid.  By that time, certain merchandise was spoiled…. or had died.


Then there is also the matter of the dislike many Spaniards have for Catalans and the repressive, even abusive attitude of the central government towards Catalunya.  I often wonder why, if the Spanish hate Catalans so, why they are so adamant that they not secede.  But of course, that’s obvious.  Catalunya is the Goose that Lays Spain’s Golden Eggs and they would miss robbing her of her wealth.


Now more than ever, Madrid is using the current economic crisis to drain Catalunya of its economic wealth and its future economic potential.  And because it has become so overt and apparent, even to those who don’t really want to see it, many more people now are falling behind the idea of Independence.  In a way, it’s reminiscent of the Americans when they decided that they were being ripped off by England and decided to free themselves of the oppression. 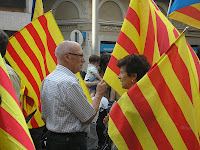 What I find most disturbing is that the Spanish government will not allow a referendum so that Catalans can vote to see if, as a group, they actually want Independence.  It doesn’t seem acceptable, in a democracy, not to allow people the basic right to hold a referendum and vote on a subject of interest to themselves.  But that’s yet another thing I noticed when I first came to Spain.  More than half of the population of Spain votes for the PP, the current right-wing political party in office.  Not only is the PP a right wing party, it is the direct descendent of Franco’s fascist government.   Franco was an ally of Hitler.  Spain didn’t enter into the Second World War, but Hitler provided aircraft to help Franco bomb Spanish cities.  It was the Lufthwaffe that bombed Guernica for Franco.  Unlike Spain as a whole, in Catalunya, the PP gets only a small percentage of the vote.


When the issue of a referendum came up recently in political circles, a Spanish general threatened to send the army if Catalunya dared to hold referendum.  This is an amazing thing for a high-ranking military person to say in this day and age, here in a so-called modern country of the European Union where if you are not a bona fide democracy, you are not admitted to the Union. 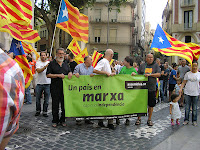 Lately there are been marches in support of Independence, and I participated in the one in Figueres.  I was happy to show my support, but I was not happy to be at the march.  It wasn’t that big, some few hundred people, but of all those few hundred, I seemed to be the only one there walking alone.  I walked alone for an hour, until the march ended and the speakers started, at which time I felt I had done my part and went home.


There will be a much bigger march in Barcelona on 11 September, Catalunya’s National Day.  I imagine there will be tens of thousands there, maybe more.  In Barcelona, in 2001, I participated in the march protesting the American invasion of Iraq.  That march had a million people.  I went alone.  A march of a million people is not a nice place to be alone.  In America maybe someone marching near you would start up a conversation and all of a sudden you’d be with someone else or with a group.  Or maybe I’m just dreaming.  In any case, that doesn’t happen here.  Here everyone was walking in groups of friends and family – people they knew and with whom they had come.  No one does anything alone and people don’t speak to strangers (nor nod hello when passing on the street).  I wanted to do my part but I felt very much an outsider.  It was very crowded, I felt overwhelmed, squished, and isolated among a million strangers.  After less than an hour I felt I had done my bit, left and headed back home.


So I’m not sure I will go to Barcelona on 11 September.  I’m still thinking about it.  But if I don’t go, my heart will be there with the Catalans who want their freedom.


Rather than try to argue my opinion on Catalan Independence, I’m supplying a couple of links to articles by people who know more and can explain things much better than I can, for anyone who is interested.  I have my opinions, but I’ve never been good at arguing them.  The first is about the general economic mess in Spain and how the central government is abusing Catalunya.

This second is a very interesting article on hatred in Spain from the same blog: