Last Saturday I went to a Cantada d’Havaneres at the beach.  Havaneres are Catalan and Spanish sailor songs that traditionally date back to the 19th century, when was involved with .  One of the first havaneres, , was written in 1855, and another, perhaps the best known, L’Amour Es Un Oiseau Rebelle, was adapted by Bizet from “El Arreglito” by Sebastián Yradier and brought to fame in the opera Carmen.  The songs typically have to do with sailing, with beautiful mulatto girls who were left behind, with disasters at sea, even with seagulls.
Traditionally these songs were sung in taverns by male trios singing a cappella or accompanied by a guitar.  In 1967 they moved from taverns to the beach with the first Cantada d’Havaneres in Calella de Palafrugell, a tiny village on the .  Calella de Palafrugell is home to 300 people in the winter; in the summer, the Cantada d’Havaneres is attended by 35,000-40,000 visitors.  Some sit on the terraces of the bars that line the beach, some sit on the beach, and many watch from the boats scattered all around in the sea nearby.  The event is so popular that it is broadcast on Catalan television and many thousands more (me included) watch from the comfort of their homes. 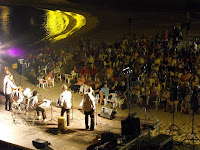 There are over 100 groups in Catalunya that perform Havaneres, now backed by a guitar and often an accordion and sometimes other instruments, and the Costa Brava no longer has a monopoly on either the performances or the groups that perform.  Peix Fregit (Fried Fish), Els Cremats, Els Pescadors de L’Escala, Port Bo, are a few of the best known.  The two groups that performed last Saturday in L’Ametlla – Veus de Reus and Grup Balandra -- were not from the Costa Brava or even from a seaside town; both groups were from nearby landlocked (where Antoni Gaudi was born).
The Grup Balandra, besides giving a great, lively performance and supplying the two photos I’ve used, also have a website where you can listen to and download for free (legally) some havaneres.  Check them out here.  For more buying (and listening) options, click here for my Amazon store.
I’ve been to hear Havaneres many times – in , in , and now here in L’Ametlla de Mar, and have enjoyed all the performances.  My first experience was in , not on the beach, but on a narrow street in Gracia at the neighborhood Festa Major.  At one point, everyone in the audience (everyone except Manuel and I, that is) got out a white handkerchief and started waving them while singing along with the performers.  What in the world was that? I asked Manuel.  But he didn’t have a clue either.  He had left in the 50s and wasn’t aware of what had clearly become some sort of cultural tradition.  The song was and the handkerchiefs played out the meaning of the lyrics that say:
Después de un año de no ver tierra
porque la guerra me lo impidió,
me fui al puerto donde se hallaba
la que adoraba mi corazón.
[After a year of not seeing land because the war did not allow me to, I went to the port where the woman whom my heart adored lived.]
¡Ay! qué placer sentía yo,
cuando en la playa
sacó el pañuelo y me saludó.
Pero después llegó hasta mí
me dio un abrazo, y en aquel acto creí morir.
[Oh, what pleasure did I experience when she got out her kerchief and greeted me on the beach. But then she came up to me, hugged me, and in this act I thought I would die.]
These days, Havaneres written in Catalan tend to be sung more than those in Castilian, in spite of which, is probably the second most popular Havanera in Catalunya and is sung without fail at every performance, always the penultimate song to be performed.  The last is inevitably El Meu Avi.  This is the Havanera of Havaneres, the one that not only talks about a great wartime sea tragedy, but gives clear reference to Catalan nationalism
El Meu Avi
El meu avi va anar a Cuba
a bordo del "Català"
el millor barco de guerra
de la flota d'ultramar.
El timoner i el nostramo
i catorze mariners
eren nascuts a Calella
de Palafrugell.
[My grandpa went to on board the Catalan, the best warship of the high seas fleet. The helmsman, and our master, and fourteen sailors were born in Calella de Palafrugell.]
Arribaren temps de guerres
de perfídies i traïcions
i en el mar de les Antilles
retronaren els canons.
I els mariners de Calella
-el meu avi enmig de tots-
varen morir a coberta,
varen morir al peu del canó.
[Wartime came, the time of perfidy and treachery, and canons thundered in the sea of the . And the sailors from Calella, my grandpa among them, died on the ship’s deck at the foot of the canon. ]
Quan el "Català" sortia a la mar
cridava el meu avi:
Apa, nois, que és tard!
però els valents de bordo
no varen tornar, (no varen tornar)
tingueren la culpa els americans
[When the Catalán was going to the sea my grandpa shouted, “Come on, boys, it’s late.” But the courageous sailors did not return, the Americans were to blame.]
Quan el "Català" sortia a la mar
els nois de Calella
feien un cremat
mans a la guitarra solien cantar:
Visca Catalunya! Visca el "Català"!
[When the Catalan went out to the sea, the boys from Calella made a cremat; they palyed their guitars and sang: Long live Catalunya! Long live the Catalan!]
I remember visiting my friend Gracia at her mother’s house when her mom started singing El Meu Avi.  Gracia’s mom passed away a few years ago, but I still remember her belting out those last words:  “Visca Catalunya!  Visca el Català!
El Meu Avi was written in homage to the sailors who died in the war with .  The author’s grandfather had participated in that war.  In Catalunya, this is the most popular of the Havaneres, not because it pays homage to the war with , but because it has become an emblem of Catalan identity.  Visca Catalunya!  Visca el Català!  That is the part that has stayed with me ever since Gracia’s mom sang the song to me more than ten years ago.
Photos taken at the beach at L'Ametlla de Mar, courtesy of Grup Balandra.
Lyrics and translations (with some modifications by me) taken from “The Habanera in ” by Galina Bakhtiarova, Quaderns-e, 03, 2004.
Posted by Dvora at 6:56 PM