Chaos in the News 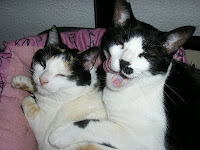 Being an orderly person, I always put things away, and I hate clutter.  Disorder and chaos make me nervous.  I want to understand things and there is no way to get a handle on chaos.  For that reason, living in can sometimes be a challenge.
once had a political party of anarchists.  Why would anyone want anarchy? It’s bad enough at home, but on a national level?  The anarchists have disappeared -- I never hear of them – but anarchy and chaos are present.  Building codes are chaotic – either totally unsupervised and ignored or draconian with no recourse to gain exceptions; all sorts of reasonable and useful laws and regulations are not enforced; trains don’t run on time; even the TV news program doesn’t necessarily start on time.  Natives shrug their shoulders a lot.  I have tried to do the same, but it’s given me a stiff neck which paracetamol doesn’t alleviate.
To illustrate, two recent news stories come to mind.
The first has to do with a team of Romanian gypsy women who are roaming the streets of , supposedly soliciting signatures on a petition and donations for a charitable enterprise.  I saw these same women, or others just like them, several years ago when I lived in , so surely this was not anything new, nevertheless it was on the midday news this week.
In fact, there is no charitable enterprise and they are not so much looking to con you as they are waiting for you to dig into your purse or pocket so that they can steal your wallet, camera, or mobile phone.
That these women do this is not what I found notable.  That they’ve been arrested more than a hundred times and yet are still roaming the streets doing exactly the same thing is.
The other story is about bands of pickpockets who operate mostly on the trains and metro, although they are also on the streets.  They come from , , and all over.  There are so many of them that they are not identified on the news as to their country of origin.  They are far more numerous and multinational than the gypsy women tricksters.
These pickpockets have been arrested hundreds of times.  They go into the police station and back out on the same day, usually within an hour or two.  It’s a revolving door that could make a person sensitive to spinning dizzy.  They know the police and the police know them, but the police can’t charge them and send them for trial because one must be found with more than 400 euros of stolen property or it is not a crime, nor a misdemeanor, nor anything but a nuisance, especially for the police.  It must be frustrating arresting the same people day after day, week after week, month after month… and have nothing come of it.  If I am peeved by the stories, how must the police feel?
The fact that these pickpockets rob people continuously (mostly tourists in the summer, but everyone is fair game, including the easy target of little old ladies who are out to get their groceries), and that they are never charged was the subject of yet another news story some time back.  In fact, it has been the subject of several news stories over the years, reminiscent of those news stories about the same streets and houses that flood every year when it rains.  If you put the two stories together (the robberies and the revolving police door), you can get a sense of why I find it chaotic here.  Does it make any sense that stealing is illegal but stealing less than 400 euros carries no legal consequence?  Has it occurred to anyone that maybe they should make it illegal to steal, any amount?  After all, 50 euros is a lot to a person who is living on a widow’s pension of 300 euros per month and for that matter, ten is too.
On a more pleasant note, the other day I heard, from the balcony of my temporary apartment, a street musician playing French tunes, Russian tunes, and, to cap it off, Chava Nagila.  That was a bit of a surprise.  It reminded me of when I lived in and could hear the musicians playing in the Placa Reial, although not many of them played Chava Nagila.  He played the accordion and played it very well.  He’s Romanian too.


Note: Comments on this or any other post are welcome.  Click "comments" at the end, and leave yours.
Posted by Dvora at 6:55 PM