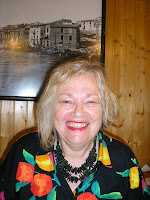 Why do people from , , , and other countries come to live in ?  Are they discontent with their home, or are they attracted by novelty, adventure, lower cost of living, or better weather?  Do they adapt, learn the language and fit in, or do they stay within the comfort zone of their home-language expat ghetto?  Do they plan eventually to go back to their home country?
You could easily say yes or no to all the above because there are all kinds of people who come for all sorts of reasons.  In the future I will explore some of these questions with several people who have either moved here or who come frequently to spend time, to unearth something of their stories.
First up is Gertrud Weiland who, with her husband Günter, came to L'Ametlla de Mar from Germany in a camper van 26 years ago.  They have raised a son here, but the couple has recently separated.  She runs Weiland Immobilien, a successful real estate agency in town, and in fact, I bought my villa with her.  I’m hoping she also sells it for me very soon.
The couple had family with a vacation home near but she preferred Catalunya.  One of her first positive experiences in Catalunya was while traveling and staying in a campground in Roses on the .  At a bakery, when she didn’t have the correct change to pay for two croissants, the salesperson told her (she was a foreign tourist at the time) to pay when she came the next day.  On the same trip, in a campground in Empuries Brava, people were dancing the sardana while Gertrud and Gunther were standing aside and watching when all of a sudden the dancers opened the circle in order to put the two of them in the center while they danced around them.  She said that was an incredible gesture of inclusion that she will never forget.
When I asked Gertrud what she liked about it here, she responded, “By here do you mean or Catalunya?”
“Which do you prefer?” I asked.
“I’ll speak about Catalunya because it’s where I live and what I know.  I like the tolerance, the dignity accorded to each person, and the attribute of taking responsibility for oneself instead of making excuses and blaming others.”
Gertrud told me that Catalans talk about their conflicts, and differences get resolved quickly.  That is different from the German manner of internalizing inner conflicts and never talking about problems.
Catalans are bilingual with Castilian (Spanish) and Catalan being the two official languages.  Gertrud learned Castilian first and then Catalan.  She took classes and found it easy; already knowing Latin and French helped as did having fallen in love with the Catalan people.  It took her two years to learn both.  She says she learned the most from watching the Catalan soap operas on TV.  She also wasn’t shy about using in public what she was learning and found that people didn’t laugh but rather made the effort to understand her.
When they first came, Gertrud and Günther opened a business converting vans into campers (caravans), fitting in kitchens, beds, etc.  Gertrud described herself to me as having been part of the flower power generation.  After seeing Günther’s website about his camper conversions and travels, I would say that truer hippies never existed.  I hope to explore more about that in a future post.
After about ten years, there was an economic downturn and the business faltered.  Gertrud began to do translation work, mainly for real estate agents, and eventually opened her own agency.  She speaks five languages, which must be a big plus here in an area where buyers have been coming from England, France, Germany, Switzerland, The Netherlands, and now, the Russians are also coming!  They buy mainly holiday homes, income-earning investment properties, or retirement homes.  Her agency, Weiland Immobilien, is one of the few in the village that has survived the latest economic crisis.
When business slowed down Gertrud took the opportunity to further her education and now, in addition to her real estate business, Gertrud is also a practicing therapist using the Lacan method of psychoanalysis.  She is a busy camper.
And finally, after all these years, Gertrud is in the process of applying for Spanish citizenship.  She mentioned, however, that if it were possible to obtain Catalan citizenship, she would prefer that.
Applying for citizenship indicates a desire to remain permanently.  I asked Gertrud if she ever thought about going back to live in .  “For nothing in the world,” she told me.
Her favorite Catalan singer: Joan Manel Serrat (singer/songwriter)
Her favorite Catalan book: Shadow of the Wind by Carlos Ruiz Zafon
Her favorite Spanish movie: Los Santos Innocentes, a 1984 film by Mario Camus, based on a novel by Miquel Delibes
Posted by Dvora at 4:33 PM