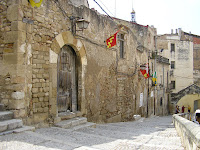 On Tuesday 27 April, I put on shorts for the first time this year, intending to go out, enjoy the sun, and start on my summer tan. Giving myself a look over in the full length mirror, I noticed a good-size lump on the back of my right leg, at the back of my knee joint. When I turned a little to get a better look, I saw an even bigger one on the back of my left knee. I felt them and they were hard -- hard and ugly. You might ask, how could something grow that big without my knowing about it. All I can say is, God only knows. I never noticed the lumps all winter, maybe because I only look in the mirror after I’m dressed. The lumps don’t hurt, and the slight stiffness that I feel in my left knee I figured was just part of aging. It’s not nearly as stiff as what I feel in my lower back most mornings.


But lumps don’t count as part of aging, so I called for a doctor’s appointment and got one for the Friday of that same week. My doctor told me they were not bone cancer (my original worry), only cysts. I have had small cysts on my head several times in the last twenty years – the one I have now is the fourth. The first three I had removed; but for this fourth one, the dermatologist here prescribed two creams to apply each day and after a while it became smaller and has stayed the same now for over two years, so I just leave it alone. When it comes to my body, if it ain’t truly broke, I don’t mess with it.

However, the doctor said the ones on my knees would probably just continue to grow indefinitely so she authorized for me to go see a specialist – a surgeon – in Tortosa. I was given an appointment for the following Tuesday.

I am a great chicken when it comes to illness, pain, and almost any kind of medical procedure, with surgery being at the top of the list for what to avoid at all costs. But I did a good job of not worrying too much. Since Doctor Nadal had assured me that they weren’t bone cancer, I figured this wouldn’t be much worse than the surgeries I’ve had on the small cysts. Grow up Dvora; it isn’t enough to lose sleep over

In my village the health service has a small building where the regular GPs and pediatricians work, where you can go in case of an emergency 24 hours a day, and where the ambulance is stationed. But specialists are housed in larger clinics and the nearest one to us is in Tortosa. 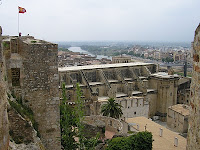 Tortosa is our closest city and the capital of the comarca (like a county) of the Baix Ebre (lower Ebre). It is a small city of about 31,000 people, and sits on the Ebre River. Originally Roman, it was conquered by the Muslims in the 8th century and remained under Muslim rule for over 400 years. The castle overlooking the city (now a government-run Parador) was built by the Muslims in the 10th century on the site of an old Roman acropolis. Tortosa was later conquered by Ramon Berenguer IV, Count of Barcelona, in 1148 as part of the Second Crusade. 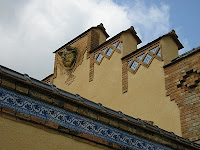 The cathedral was started in 1347 and took 250 years to build. They say it was completed in 1597, but in fact, I have never seen it without scaffolding and construction netting. The church of Sant Domènec, built in the 16th century, has sculptures on the facade that were all beheaded by gunshot during the Spanish Civil War. One of the most colorful buildings is the old Escorxador (slaughter house), designed in 1905 in the modernist style. It is made of brickwork and ceramics and is reminiscent of the Mudejar architectural style. The biggest battle of the Civil War – the Battle of the Ebro – took place in this area and Tortosa still shows many scars from that time. Although a comarcal capital, Tortosa has many ruins and derelict buildings in its old town, gives the overall impression of being shabby, and seems to be a somewhat forgotten and abandoned part of Catalunya. 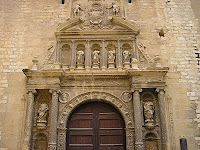 But this wasn’t a sightseeing trip. The Tortosa surgeon said that I had Baker’s cysts, but because there were two of them – twins -- he thought I should be seen by a traumatòleg (an injury surgeon) who would probably do an eco- or sonogram, to check on any underlying problem with the joint. This was not good news as far as I was concerned, and I went down to the window to get the appointment with the traumatòleg. They gave me one for the following Monday.

Now I did start to worry about having surgery, not just on one knee, but on both and not just because of a little fat-filled cyst but something more complicated. Would they do both at the same time? How would I get around? My bathroom is on a half landing, how would I get to it? My bedroom is upstairs. Would I be able to bend over to feed the cats and clean kitty poop from their boxes? Would I be in a wheelchair for the rest of my life? I really should not be turned loose with my own thoughts when an illness or health issue looms.

That Monday, the wait for the traumatòleg was over an hour. These doctors are public health service employees and don’t have a say in how many people get scheduled in. Some people went in and out quickly and others took longer. Frankly, I was happy that she (as it turned out) was giving everyone who came the time and attention they needed. Keep in mind that none of these doctor and specialist appointments were costing me a penny. When my turn came, I explained my problem briefly (in Catalan – all my conversations with medical personnel are in Catalan), she had my record already on her computer screen, and she proceeded to examine me.

The traumatòleg confirmed that these were Baker’s cysts, and that they were probably the result of sitting a lot. She would authorize an ecogram to take a better look but she didn’t think surgery would be necessary. I was so relieved I kissed her. No surgery, no drugs, no creams. I could treat them myself. But I couldn’t quite understand what she was telling me to do twice a day for twenty minutes. Put something against the cysts? Had I heard right? I didn’t even need to go to a pharmacy. I just needed to go to a grocery store and buy two bags of frozen peas!