It’s not every day one turns 80 and not everyone has the luck to do so in good health. But Manel did both last week.


Besides having good health, Manel also has the good fortune to have kind and generous friends who had offered to put on a party for his birthday. But the party would follow on the weekend, and I will talk about that in a minute. The first question was what to do on the actual day. I decided to invite him for a day trip to Horta de Sant Joan, one of our favorite villages in the Terra Alta, land of good strong wine and wonderful landscapes with strange rock formations, where Picasso visited and worked for some time and where they say he found inspiration for his venture into cubism.

All of that notwithstanding, what I wanted to do in Horta was to go and see Lo Parot, the 2000-year-old olive tree. If Manel thought that at 80 he was old, this tree could help him put age into perspective.

In July 2009 at the outskirts of Horta, there was a huge forest fire fueled by high winds where 1200 hectares were burned and five firefighters died when the wind changed and they became trapped. This was very big and very grave news within Catalunya, a relatively small community, and everyone grieved, including me. They had originally announced that the fire had been started inadvertently by a lightning strike, but later it was discovered that it had been intentionally set, leading to the recent arrest of two young men who had worked in fire prevention, making the whole tragedy even more grievous. 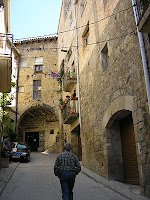 So as lovely as it is, Horta now also holds some sad associations. Nevertheless we drove up, passing some of the charred land along the way. Once an Iberic settlement, Horta fell to the Moslem invaders in the 8th century, later being taken by conquering Christians in the 12th. In 1174 it came under the jurisdiction of the Templars. I find Horta a pretty little village, relatively speaking. When you travel around Spain, you have to take into account that Spain was a very poor country for most of the 20th century, having suffered its own Civil War after which there was no rebuilding money from other countries, and having suffered over 30 years under Franco’s not very progressive thumb. Especially in small towns and villages, you are likely to see buldings in ruins or various states of disrepair, with many of the ones from the 1960s and 70scheaply built. Unfortunately, adding to the poor physical condition, you also find a lot of garbage on the ground and very few flower pots on balconies. But Horta rises above the average. So many of the old stone buildings are in good condition that you don’t notice the others, many people tend flowers on their balconies, and when you add the views that are had from many vantage points, you end up with a picturesque village. 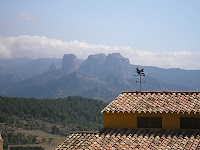 We had two items on the agenda: the Centre Picasso D’Orta and Lo Parot. We’ve been to Horta many times but never to the Picasso center because they have no original Picasso paintings, so why go? However, recently it dawned on me that it might be a good learning experience any way, you don’t need originals for that, and you’re never too old to learn.

Picasso spent two periods in Horta: the first as a young man when he stayed with his friend Manuel Pallarès from summer 1898 to February 1899, and the second when he came with his lover Fernande Olivier and stayed from May to August of 1909. Although Horta has no original paintings, they have many facsimiles and together with text, they explain a lot about what Picasso did and what he saw in Horta. I personally enjoyed the paintings from his first stay, when his style was natural and flowing and the pictures beautiful, before he started in with geometry. All around they plaster the quote: “Tot el que sé ho he après a Horta” (All I know I have learned in Horta). But I’m suspicious. In what context did he say that? Surely it is an exaggeration, unless it refers to his learning Catalan. Nevertheless, the center was well worth the two-euro price of admission. 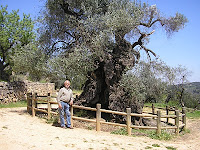 From Horta we drove 500 meters out of town and turned right at the sign pointing to Lo Parot, parking near a shed with a small enclosure containing a lone dog, then walking along a path, through an olive grove, until we came to the fenced off 2000-year-old tree. It is a little the worse for wear; I think Manel is in much better shape for his age. Still, it was impressive to see such an old survivor. And it isn’t the only one, there are several 2000-year-old olive trees in southern Catalunya. The California redwoods are much bigger (just about everything in California is bigger), but few are as old, and in any case, they were never cultivated, as these trees were 2000 years ago, and they don’t produce olives, do they.

Lunch was in a nearby restored masia, a rural farmhouse now turned into lodging and restaurant that was a little disappointing both for the food and the fact that out in the countryside, we had no view. But the ride back was unforgettable. We took a different road back and drove for about half an hour in second gear on the narrowest winding road I have ever driven. Luckily we only met one car and that was on a straight stretch, otherwise I have no idea how we could have passed by each other. Many of the sharp curves had mirrors up so you could see if someone was coming, although God only knows what you were supposed to do if there was.

The high point of the ride was when we were leaving the mountains. We passed a wildlife warning road sign illustrated with a deer, and Manel wondered if there really were any deer in the area. We have never seen one in Spain. And while he was saying it, I interrupted him shouting, “There’s one! Look! Look there,” pointing to the left. Just a few feet up the hill and quite close to the road was a grazing deer. Then, two minutes later, I spotted, also to the left, what looked like a wild dog coming down the hill towards the road. Manel saw it too and thought it might be a fox. But it was too big, and when I looked it up later on the internet, I found that it was clearly a jackal. What a day for wildlife. Having seen none (other than birds and rabbits and lots of abandoned dogs and cats) in the nine years that I’ve been here, I saw two wild creatures in one day. 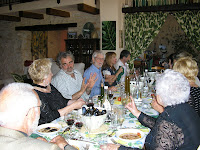 The pièce de résistance of Manel’s 80th birthday was undoubtedly the birthday party that Carol and Lino put on for him. They had told Manel he could invite whoever he liked, and he chose to invite his family – those who live locally, which are his two sisters and their families from Barcelona. Three couldn’t come, but his two older sisters Carmen and Pepita came, Carmen’s daughter Marta came as did Pepita’s son Jose Luis, his wife Susanna, and their two children, bringing the family total to eleven. With our two hosts and two other friends, we were thirteen, but don’t tell anyone. Carol had the table set for fourteen so as to fool the forces that be. To me it felt like a Pesach seder with the extra place set for Eliahu.

Carol and Lino live in the hills (they are called mountains here) outside of El Perelló in a casa rustica (sometimes a euphemism for a ruin) overlooking the sea. They did indeed buy the ruin of a former 375-square-meter farmhouse sitting on 6 ½ hectares of land, but after two years of work, they turned it into the dream casa rustica of style and living magazines… literally. It is an exceptionally beautiful eco-friendly house that uses solar panels and wind generator, they recycle their water whose source is the rain (and a nearby Roman well when rain isn’t enough), and they use no fertilizers or pesticides on their olive or fruit trees.

Besides being imaginative, industrious, talented, and extremely generous, Carol is also a brilliant cook while Lino can also hold his own wielding the cooking knife and spoon, thus lunch was fabulous. And let me make it clear, this wasn’t a birthday party with some fingerfood, birthday cake, and cava, which also would have been great (and is what I did when I turned 60). It was a full sit-down, three course meal, served by a hired helper, preceded by appetizers and followed by the most incredible chocolate trifle I (or anyone else there) have ever seen. 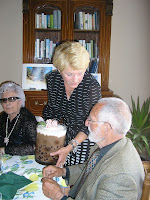 We sipped our cava while nibbling on olives (of course), pickled garlic (which at least one of the Catalans was afraid to try, having never seen such a thing before), and canapés of little toasts with blended melted cheeses plus another that I didn’t try because I became instantly hooked on the cheeses and only stopped munching those when we were called to the table. We sat down to yummy steamed mussels with spicy tomatoes prepared by Lino, followed by pasta with fresh pesto, green beans, and potatoes. It wasn’t MY birthday, but pesto is my favorite and it’s been a while since I’ve had such a good one. The main dish was a lovely lamb stew, the perfect dish for what should have been a beautiful spring day, but served just as well for the cold winter one it turned out to be. The Terra Alta red wine helped keep us warm. For the grand finale, cava accompanied a magnificent chocolate trifle with cherries, brandy, and whipped cream topped off with an “80” and lit with candles, lest anyone should forget why we were all there together enjoying that incredible feast and each other’s company. 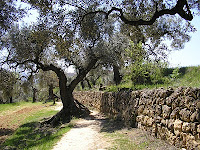 Carol and Lino plan to move to Italy where Lino is from and where they will set out on a new adventure, this one possibly involving vineyards and the making of wine. Although the market is slow at the moment, their wonderful house is up for sale, and sooner or later they will sell. When they do, we will sorely miss them. And that is one of the problems inherent in being an expat. You don’t have your old friends nearby, and then the new ones you make up and leave! Unlike olive trees, expats don’t put down roots.
Posted by Dvora at 6:20 PM