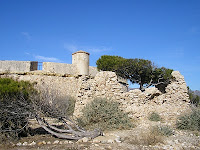 Last Friday was Sant Jordi, my favorite Catalan holiday. Sant Jordi is the Day of the Book and the Rose, the two things not being related, but curiously connected on this day. Saint George, who slew the dragon and saved the princess, is one of the favorite saints worldwide and the patron saint of many places and groups including Russia, Portugal, Ethiopia, Hungary, Georgia, Greece, Beirut, Naples, the Scouting Movement, England and Catalunya, with the cross of Saint George (a red cross on a white background) incorporated into some of their flags. Pere I (1196-1213) declared Sant Jordi to be the patron saint of Catalunya and he founded the order of the Knights of Sant Jordi d’Alfama in 1201. They were based less than a kilometer from where I live, in a defensive castle overlooking the sea. I sometimes pass the remains of the 13th century castle and adjacent tower when I go for a walk. 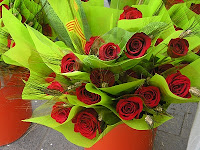 The feast day of Saint George is celebrated in different ways around the world. Here in Catalunya, La Diada de Sant Jordi has been celebrated as an official Catalan holiday since 1456 and is much like Valentine’s Day except that a man gives his sweetheart or friend a rose, while the woman gives the man a book. In this modern age of equality, women also receive books instead of or (better yet) in addition to a rose. When Sant Jordi killed the dragon, a rose grew from the spot where the dragon’s blood spilled, thus the most common rose given on this day is the long-stemmed blood red rose. However, some people flaunt tradition (and myth) and give a white, yellow, pink, or multi-colored (artificially dyed) rose. Whatever the color, the rose is always accompanied by a stalk of wheat and wrapped in a ribbon representing the senyera, the Catalan national flag.

Traditionally only flowers were given, but in 1923, a Barcelona bookseller began a campaign to celebrate 23 April as the Day of the Book because the death of William Shakespeare and Miguel de Cervantes happen to coincide on 23 April 1616. Since then, books have been added to the holiday and it has become the Day of the Book and the Rose. In 1995, UNESCO adopted 23 April as World Book Day. In Catalunya, more than half of the books sold during the year are sold on this one day. 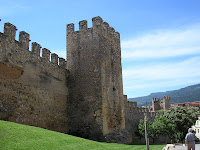 Although it is generally accepted that this dragon slaying occurred in Silene, Libya, there are several other places that claim it happened within their precincts, Montblanc, in Catalunya, being one of those. To enjoy a truly wonderful Sant Jordi experience, one must go either to Montblanc, where there is a whole week of medieval festivities that go on within that city’s medieval walls, or to Barcelona, where the tables of books and roses are profuse and the crowds multitudinous. But I did neither. At least not this year. I’ve been to Montblanc and would have gone again this year except for the dubious weather forecast, and I’ve walked all of the Ramblas many times during the last few years, enjoying the very lively and overcrowded ambience of the holiday there. But this year Manel and I went to Reus, a nearby town that promised to have more on offer than our own village which was not likely to have more than two tables of books and one of roses. 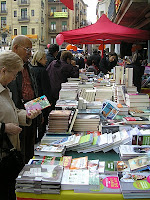 Reus was teeming with people, all browsing through piles and piles of books, set up around their main square. Catalan flags decorated the tables, the roses, and the plaça. There was even a dragon lurking back, behind the church.  I got Manel the book of his choice, a discussion of the current financial crisis, written by a flamboyant Catalan economist who is part of the directive staff of the Futbol Club Barcelona and often appears on television panel discussions wearing black shirts and bright yellow or magenta sport coats with flaming contrasting ties. Manel wanted to get me a book, but I didn’t see any book that I wanted to read. There was one volume, a history of the Jews in Tarragona, but it seemed all facts and figures, very dry, and promised to be a very difficult and slow struggle in Catalan. I am quite used to buying myself books and am not lacking in reading material, having several waiting in a to-be-read pile. But I don’t buy myself flowers, so I opted for a beautiful red rose with the mandatory wheat stalk and Catalan flag ribbon which I then had to place in my kitchen, this being the location least likely to have a cat jump up to investigate and possibly knock it over. I wasn’t worried so much about the rose, which would undoubtedly survive a cat attack, but the vase, which is precious to me -- a hand-blown glass vase given to me years ago as a gift in Berkeley, would be more vulnerable. For several days my kitchen was prettier than usual. 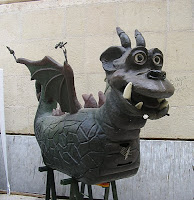 Email ThisBlogThis!Share to TwitterShare to FacebookShare to Pinterest
Labels: Day of the Book and the Rose, Montblanc, Saint George, UNESCO World Book Day