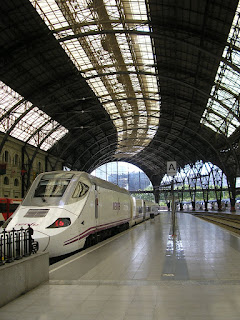 Earlier this week I went into Barcelona to have my fingerprints taken by the Mossos d’Esquadra, the police of the Generalitat of Catalunya. I decided some time ago to apply for Spanish citizenship (I live here permanently, so why not?), but it has taken me a while to start the process, and one of the numerous documents required is proof that you have no criminal record in your home country. These fingerprints have been many months in the making, and as so many things in life, the process hasn’t been straightforward.


To get my fingerprints taken in California for my original move to Spain, all I had to do was go to the local police (or maybe county sheriff) and ask for it to be done. But here no police would do it for me. I went first to the Guardia Civil (a national force, something like a cross between the FBI and the army) but they wouldn’t do it. Then I went to the Policia National, who take your application for residency and probably take prints if you need them for a statement of your Spanish criminal record, but they wouldn’t do it either. When I went to the Policia Local, the local police of my village, the office was inexplicably closed in the middle of the morning. Never mind, I could easily imagine how they would shrug their shoulders and look at me as if I were a little weird, and tell me no as the others had.

When I called the American Consulate for help, I found out that although many foreigners need their fingerprints taken, there is no such service offered by any of the several police corps that exist. However, the Consulate has made arrangements with the Mossos where they write a letter for any American that needs it and the Mossos will take the prints. I was happy that the Consulate had made these arrangements for its citizens, but surprised that while the letter took all of a minute for the Consulate to prepare and sign, they charged me 24 euros for doing it, while the Mossos took ten or fifteen minutes to take my prints, walk me to the ladies room through a maze of hallways, wait while I washed my hands, walk me back to the room where I waited while they made photocopies of everything and signed and stamped the prints form. For all this they didn’t charge anything.

Although having to get up at 6 am to take a two-hour train ride to Barcelona to take care of this was somewhat of a nuisance, it turned out to be a much nicer day than the one I had last week when I was too shy to enter the restaurant because I knew some of the other diners and ended up having a lousy lunch somewhere else.

The day started in the dark at 6 am and lightened up when, at the train station, I met up by chance with Julian, our acquaintance who recommended that wonderful restaurant for the calçots, those unique Catalan onions. We walked together from the ticket office to our platform where he found another acquaintance of his, so the three of us (two Catalans and one American) rode together talking about the Football Club Barcelona, how and why Spanish people throw trash on the ground and on the roads and ignore all manner of polite behavior, not to mention actual laws, especially when they drive. Julian related one story about someone who lives out in the campo. This man has been accosted several times on his own property by his neighbor’s dogs that run free and do not have a friendly demeanor. The man complained to the dogs’ owner – a local policeman – who refused to restrain his dogs, even thought it isn’t legal to let your dogs run loose. He remarked to us that if the police set such an example, what do you expect from the public? I didn’t mention the local police that had ignored and driven through the stop sign last week. Could it be the same local policeman who lets his dogs run free, drives through stop signs, and closes the Police office during working hours? And shouldn’t that office be open 24 hours? Julian, who is Catalan, says that Spain is a third world country within Europe.

After a lively train ride, (which did not end at the beautiful 1920s Estacio de Franca pictured above, but rather at Passeig de Gracia, an underground station of no aesthetic value) I went by metro to the Consulate, located in the upscale neighborhood of Sarrià, for my letter. I had an appointment and was taken care of immediately. Because I didn’t know where the police headquarters was, nor did I have a map with me, I decided to take a taxi for the next leg of my errand in order to ensure that I didn’t arrive at the beginning of someone’s two-hour lunch break. But before that, I had enough time to go to the nearby city market to have a morning snack of fresh-squeezed orange juice and a buttery croissant at a small bar that offered the choice of the usual oily croissants covered with a sugary glaze, and the real thing, syrup free and made with butter.

My business with the police – my main business of the day – was carried out quickly and pleasantly and left me with the decision of what to do next. Although I hadn’t known how to get there, there are actually few parts of Barcelona that I am not familiar with, so once delivered by taxi, I knew exactly where I was. I could take the metro to the old part of town – the part I am most familiar with and where I know several restaurants to go to, or walk along the Diagonal, window shop, and find somewhere new (and challenging!) to eat. I chose to walk the Diagonal, a very wide boulevard of corporate headquarters and upscale shops – a little like Wilshire Boulevard at the Miracle Mile -- and had a fine time on a sunny, warm spring day admiring shop windows full of things I don’t need, don’t want, or can’t afford. So I was walking down this rather grand boulevard, surrounded by well-dressed people, and came to wait to cross a street at a red light when a bicyclist came up from behind and stopped, slightly ahead of me at my left. I couldn’t see the man’s face but had a clear view of his naked body and nude behind. He didn’t have on a stitch.

Lunch was in an Italian restaurant where I had a very satisfactory pizza named (as the one was last week) after the restaurant, but this time with a full explanation of what ingredients it would have. I enjoyed the Tagliatella pizza that had caramelized onion, spinach, red pepper, mushrooms, goat cheese, and bacon, and, thankfully, no tomato sauce. AND, I was not the only woman eating there alone; there was another lone woman of a certain age, much like me.

Thursday’s news was dominated by Joan Antoni Samaranch who died on Wednesday. If you follow sports, especially the Olympics, you might recognize him as being the former President of the International Olympic Committee who held that position for 21 years. His civil memorial service, held at the Palau de la Generalitat (Catalan government palace) followed by the religious service at the Barcelona Cathedral and presided over by the bishop was attended by the Catalan government, members of the Spanish government, many sports and business people, royalty from Greece and other European countries, and the Spanish royal family. The Cathedral was full.

Catalans take pride in their soccer team and in other Catalans who have made a name for themselves in the world. And yet Samaranch, as a Catalan, seems to have been an anomaly. He joined the Falange during the Spanish Civil War and later worked in the Franco government as Ambassador to the Soviet Union, among other things. Franco, the Spanish right wing, and especially the Falange, were and are zealously anti-Catalan. Yet years ago, working as a sports journalist, he was dismissed by his newspaper after criticizing Real Madrid supporters in 1943 when Madrid won against Barcelona 11-1 in a game many thought was fixed. I wonder what he said! Many years later, he was instrumental in bringing the 1992 Olympics to Barcelona, no small thing and one that no one here will ever forget, for the Olympics can do much to boost a city and Barcelona, with a rundown infrastructure after more than thirty years of Franco era oppression, benefited enormously.

Catalan national identity is an important issue here and the Catalan language underlies that identity. All Catalans speak both Catalan (which is the language of instruction in public schools) and Castilian (what we call Spanish, but in Spain there are four official languages so you can’t really call one of them Spanish). They say here that if you speak Catalan, you are Catalan. So it was striking that the Prince of Asturias (Prince Felipe, son of Juan Carlos I, King of Spain) gave his address in Catalan, a most remarkable thing for a person in his position to do, what with all the antagonism between Catalunya and the rest of Spain, particularly Madrid, and the waging of the language wars that go on here. But then the Spanish royal family does many things I think are positive. And yet when Samaranch’s son and daughter spoke, they both spoke in Castilian.

I doubt that Samaranch was a beloved figure here in Catalunya but he seems to have been a respected one, being one of the most internationally famous and influential figures in the world of sports, involved not just in one sport, but in all sport. In any case, the Catalans tend to be very proud of their great achievers, sports figures such as Rafael Nadal, Aranxa Sanchez, and Pau Gasol, singers and musicians such as Josep Carreras, Montserrat Caballé, and Pau Casals, painters such as Joan Mirò and Salvador Dalí, and the great architect Antoni Gaudí. If you speak Catalan, you are Catalan and yet I still seem to be a foreigner.
Posted by Dvora at 7:20 PM