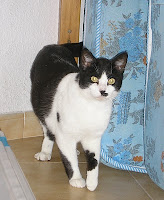 After almost a month’s stay at the vet’s (for which they didn’t charge me a penny), Felix (aka Bobby) is now in my empty upstairs bedroom on indefinite R&R. Although they said I could let him back out on the street, I brought him home instead, hoping that Johanna, the cat lady, who had just returned from several months in The Netherlands, would adopt him. When I told her what had happened and described the wounded cat, she of course knew which one he was (the friendliest of the bunch) and told me his name was Bobby. Well, his name is Bobby if she decides to keep him!

I’m glad I didn’t let him out on the street, because when I took him upstairs and let him out of the carrier, he couldn’t walk. Really he seemed almost completely disabled, and I couldn’t understand how the vet could say he could go directly back to the street. Later that afternoon I drove back to the vet to ask about it. (It is one thing to have a discussion in Catalan on the phone, and another to have a discussion with a vet in Catalan on the phone, with no opportunity to use one’s hands, point, and mime.) And actually, even with visual aids, I still don’t understand, because they continued to say that he could go straight back on the street while they also said that it will be about a month before he can walk somewhat properly.

About a week after telling me he had a pellet in his leg, they decided to operate. But in the end, for some reason unknown to me, they didn’t. He will never regain normal movement because the pellet is still there, the bone is displaced, and one leg, they told me, is now longer than the other. But the bones are fusing, so eventually the leg will be functional, even if his movements may no longer be as graceful as they once were. However, I simply can’t turn the critter out until he is better, although I also wonder if, once he is mobile, he will be better off (and/or happier) returning to his old haunt and his old cat friends, rather than being adopted by someone and cooped up. 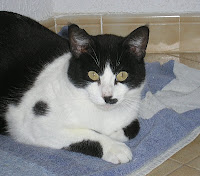 Felix has been here now since Monday and continues to hobble and not move around much, although he hobbles slightly better today than he did on Monday. He seems afraid of things in general, but he isn’t afraid of me and prefers petting to food. He is sweet, affectionate, and far more gentle than Minnie who always inflicts wounds when she plays or is petted. His broken left leg seems to have a fair amount of movement as do the foot and claws, but it seems to hurt him when he puts weight on it. I’ll be back at the vet on Tuesday to discuss prognosis.

Bulls:
The Dalai Lama has come out in support of the proposed ban on bullfights in Catalunya, saying that the public torture of bulls is unnecessarily cruel and joining other famous people such as Brigitte Bardot and Doris Day! In other parts of Spain, there is a move on to have bullfighting legally recognized as a cultural tradition and thus ensure its continuance. Esperanza Aguirre, the right-wing President of the Community of Madrid, one of the regions promoting this move, refers to the works of Picasso, Goya, and Hemingway as proof that the tradition has value and should continue, in the same way, I suppose, that paintings of slaves would be support for the reinstatement of slavery. I don’t really follow her logic. But then, I’m in there with the Dalai Lama, Brigitte, and Doris, against torture and biased in favor of the bull.

Cabbages:
Tuesday’s news told that the mayor of a town in Osca has come to police headquarters in Reus, where the Riudecols booty has been stored, to inspect a piece of the knight’s stolen goods, believing that it had been stolen, many years ago from his cathedral. The plot thickens.

Driving in Spain:
This morning, when, headed into the village I came to the “Stop” sign within my urbanization, there was a car coming towards me – a police car. He was in no obvious hurry, driving at around the 30 kilometer speed limit. Most drivers here don’t stop for Stop signs, and treat them instead as a Yield. But he sailed right through, not even slowing down or glancing in either direction to see if the coast was clear. He simply passed the Stop as if it wasn’t there. I was so stunned it took me a minute to resume driving, after having come, as is my custom, to a complete stop.

Cars and Nostalgia:
I was hoping, this week, to encourage you, the readers, to participate more in the blog and post a comment. Several people wrote to me privately after the classic car post: to say that they remembered that beautiful Mercedes, to talk about the Studebaker Lark that Shellie, her sister, and her mom drove, Jerry wrote to tell me about an incident with police when he and Uri were out test driving (that is, HE was driving and Uri talked them out of a ticket), and Manuel S, my stepson, wrote to tell me he wanted to sell his car and be car-free.

I didn’t actually start out to write about the Mercedes we had, nor about my father and how I missed him. The fact is that while I enjoyed the heck out of that classic car show, I didn’t really have anything to say about classic cars or the show. When I sat down to try to write something, all these other things came out. Maybe some of you also have cars of your dreams or cars that trigger your memories and you’d like to share that?

Do you have a dream car – one from a TV show, film, or a book? Although I mentioned The Saint and his Volvo P1800 in the earlier post, I actually prefer Columbo and his raggedy 1959 Peugeot 403 Cabriolet. I have fond memories of many cars of my friends: Shellie’s Lark, Dena’s little Renault, the Rover that Uri once fixed up, an elegant car with (of all things) a cigar rack at the driver’s left hand. Now how cool was that? There was Ami’s Comet that broke down a lot and that we called the Vomit, my old buddy Sheila’s VW bug, the only car I ever heard of with an automatic stick shift – that is, I think, a stick shift without the clutch, the Volvo 122 Bonnie had when I met her, that was a kind of yucky green, and that she said was actually a pretty color when she bought the car, in Sweden, where the quality of light was different. 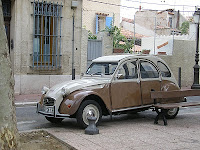 The car of my dreams is, and has been for a few years, the Citroen 2 CV that I mentioned in the earlier post. Although it is most likely that once I sell my villa and move to a town I will no longer have a car, still, I can dream.

If you’d like to reminisce, please do it here. You can use the comments feature at the end of this post (if you don’t have or don’t want to set up an ID, you can comment as anonymous and then sign or not sign your name). If you want to include a photo, you can put your comment and the photo in an email to me (I don’t think the comments feature allows for photos) and I will add it to the end of this post. Please take a moment to share your memories or dreams with the rest of us. 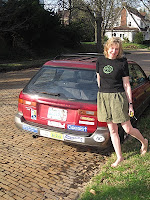 This discussion is particularly timely for me, as I just got rid of my 1995 Subaru Outback yesterday. It had over 180,000 miles, the "check engine" light came on and off randomly, and I know it had many as-yet-undiagnosed but critical mechanical problems which could sabotage me at any time. Yet, I've had that car since it was new, raised my two kids in it (the melted crayon stains on the back seat attest to the many family trips), and the flowering of bumper stickers are testimony to my many political passions (from "Million Mom March" to "Obama for President" to "Single Payer Healthcare". My favorite one: "God Bless the Whole World. No Exceptions.") As I watched the tow truck haul it up to be taken away and donated to our local public radio station, I felt the tears rise in my throat. So many memories of camping trips, trips to the park with the dog (also now dead), and intrepid forays on icy streets. I even once used that car to transport an injured kid from a sledding hill to the hospital in a snowstorm, when neither his parents' nor any other car or truck around could navigate the streets. I know transitions are part of life...and I now have Manuel S.'s darling 2008 Subaru Imprezza to love...but they can still be painful. Thank you for the opportunity for this cathartic eulogy; it helped!
Posted by Dvora at 3:49 PM