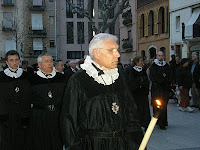 Writing an expat blog from Spain behooves one to say something about Holy Week, even though in Catalunya, things are not quite as holy as elsewhere in Spain. In fact, in the Catalan version of Wikipedia (Viquipèdia) you are referred to the Philippines and Andalusia if you want to know how a real Holy Week is celebrated.


Mostly I’ve been surrounded by people who came to spend Setmana Santa at their vacation homes having barbecues, tidying up their gardens, and catching a little bit of sun. This year Passover coincided with Holy Week, and I found it odd that the definition for pasqua in my Catalan dictionary means first of all Jewish Passover, and secondly Easter. Yet I didn’t celebrate either. No Passover, having no context for a seder, and of course my celebrating Easter was out of the question. But even the idea of going as a tourist to attend a procession of what to American eyes looks like a parade of the robed and hooded Ku Klux Klan, did not really appeal.

I did watch a couple of processions in the past. The first, about nine years ago, was a very small one made up of only one confraria (brotherhood) that went up La Rambla in Barcelona. Actually, I think when I saw them they were only rehearsing. The second was more of a major production, five years ago in Tarragona. I mentioned in an earlier post that Tarragona feels more Spanish to me than Catalan. One reason for this is the huge petro-chemical industry that borders the city and the thousands of Spaniards from poorer parts of Spain who have moved to Tarragona for the employment opportunities that these businesses such as Dow, Basf, BP, DuPont, and Repsol afford. Even after a generation, these Spanish immigrants maintain their southern Spanish traditions (including one of only two remaining bull rings in Catalunya), language (choosing not to speak Catalan), and even the very strong accent that their children, born here, continue to speak with.

In Tarragona there were many confraries, some in hoods, some carrying statues of Jesus or Mary heavily decorated with flowers. On T.V. I’ve seen people in Seville shedding tears at these processions, so moved are they by the image of Jesus in his earthly torment or the grief of his mother Maria. Jesus may be the main character, but Maria also plays an important role and around her there can be fierce competitions and vehement arguments. One problem is that there are many Marias. Who are they? Where did so many come from? How could there be more than one Maria, mother of God? For years I have found the answers to these questions shrouded in mystery.

But this year I finally undertook to become enlightened. First you have various titles that Mary enjoys such as Blessed Mother, Virgin, Madonna, Our Lady, Notre Dame, Queen of Peace, to name a few. Then, there are Marys who are named for various apparitions that are said to have occurred at various times around the world, such as Our Lady of Lourdes, Our Lady of Fatima, Our Lady of Guadalupe. Or the name might refer to an attribute: Our Lady of Sorrows, Our Lady of Hope. Geography might come into it, as in "La Macarena", the title given to "Nuestra Señora de la Esperanza" (Our Lady of Hope) in the Macarena neighborhood of Seville. Catalunya holds the Virgin of Montserrat very dear and many girls are named after her (including the most famous, Montserrat Caballé). Is it any wonder I was confused? But what is even more interesting than all these names is the fact that at some of the processions people compete and argue over whose Virgin is the best. I wonder what the Queen of Peace would think of that. 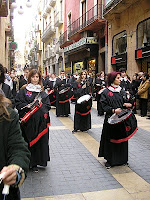 What I loved at the Tarragona procession were the trumpets and drums, but especially the drums. You can feel them in your body as the drummers slowly march by. There is something very primal, vital, powerful, and intense in those drums and if I go again it would be to feel that sensation once more.

Setmana Santa is comprised of several commemorative days with one of the early ones being El dia de Rams (Palm Sunday). Ram, in Catalan, means a broken off branch or a bouquet of flowers. This is the day that Jesus entered Jerusalem. Children here are given palm fronds or laurel branches by their godparents which they carry to church, that is, those that go. Eventually the palms end up decorating the balcony balustrade. 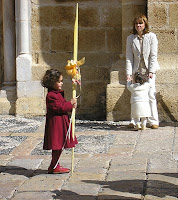 Holy Monday is when the processions, for those towns that are heavily into it, begin. Then comes Holy Thursday, the day of the last supper. This marks the end of Lent. Divendres Sant (Good Friday) is when Jesus was executed. This is a legal holiday everywhere in Spain and is the day of the most important processions. And of course Pasqua (Easter) the day Christ was resurrected.

Whereas processions don’t, the culinary elements of Easter do tempt me. Bunyols, much like donut holes but with a hint of anise, are made during quaresma, or Lent, and I always make it a habit to have some. As unhealthy as they may be, they are good for my soul. The mona (a special sweet pastry made for Easter) is given by the godparent to the godchild. Mones may be a ring pastry decorated with eggs, iced cakes also decorated with eggs and little chicks, or far more elaborate constructions, usually of chocolate, depicting cartoon characters, soccer stars, great architecture, anything really. Having no godparents, I had no mona this year (I’ve bought them for myself in previous years, but have gotten tired of the whole thing). Mona, by the way, besides being a special sweet made for Easter, also means monkey.

For many, both Easter and Passover are holidays that mark the beginning of spring. The Haggadah includes a beautiful mention of it from the Song of Songs:

For, lo, the winter is past,
the rain is over and gone;
the flowers appear on the earth;
the time of the singing of birds is come,
and the voice of the turtle is heard in our land;
the fig tree putteth forth her green figs,
and the vines with the tender grape give a good smell.
Arise, my love, my fair one, and come away. 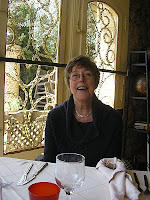 With spring in mind, I went out to lunch on Easter Sunday with Manel and my friend Eve. Nothing religious about it, we simply went out to enjoy a sunny (albeit cold) spring day after having endured a markedly miserable winter. We ate at a restaurant called Carpe Diem in nearby Miami Platja, one of the prettiest restaurants in the area. It is owned and run by a foreign couple (foreign to some -- he is American and she is British from Singapore). Our lunch wasn’t pagan or religious; it was sophisticated, enjoyable, and not too expensive. We ate avocado and mushroom melt, Greek salad, brie melted on toast with roasted peppers, cod wrapped in bacon, homemade Cumberland sausage with white beans, chocolate cake, and puff pastry with whipped cream and berries, accompanied by an inexpensive and pleasant red wine. Being one of the nicest restaurants for miles around, we were surprised (as we have been on earlier visits) how few patrons they had dining. This is yet another mystery to be solved. 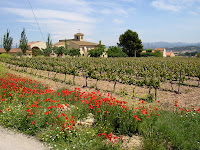