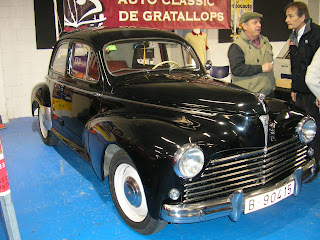 I can see my mom and dad driving around the Côte d’Azur in 1946 in a Peugeot like this. They lived in Nice for a short time after the War, while they were waiting for their visas to go to the U.S. My dad had a job in a marmalade factory, and on weekends they would dress up, rent a car, and drive around like the rich people. I’ve been to Nice and frankly, I don’t understand why they left.


I like stuff but cars aren’t stuff. When you think of stuff, you think of things to decorate the house, or things for the kitchen, of clothes and SHOES. I used to be wild for shoes, but now that my left foot bothers me and I wear sensible shoes, it isn’t the same. Shopping for shoes is almost embarrassing and amassing heaps of them has lost its appeal. 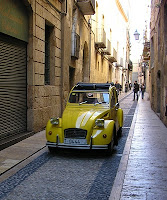 In my house, stuff does not mean electronic gadgets. I have a basic TV that does not have a flat screen, a DVD player that does not record. I bought the cheapest, smallest boom box I could find when I opened my shop, intending to use it there for background music, mainly to showcase the Catalan folk music CDs that were for sale. And it did do that (together with playing Frank Sinatra, Lester Flatt and Earl Scruggs, and Beau Soleil), although I never could get stations I liked on its radio. (The woman who sold it to me said it was because of the thick medieval stone walls.) One tourist bought one CD once. Now the boom box is my stereo at home, it only plays at very low or high volume, and I still can’t get anything I like on its radio. 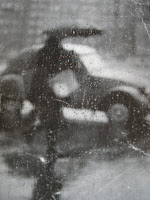 No, cars are not stuff. They are too big and expensive to be stuff. They are somewhere between stuff and investment or even works of art, and are not something I can collect. But I can look at and admire them, and I do. I always have. I have lots of photos of the cars that take my fancy when I walk down the street. Mostly they are photos of Citroen 2 CVs. I love those cars. I even use an image of one as a bookmark. Actually it is a postcard, and fittingly, I found it in a secondhand copy of a Maigret mystery that I bought at Black Oak Books in Berkeley fifteen or more years ago. The photo was taken in 1957 by Sabine Weiss and since it’s a shot taken in the rain, it was never meant to be sharp and clear, but a kind of misty, romantic image. Now that it’s been marking places in my books for over fifteen years, it is even murkier. But for me, it still inspires the same romantic feeling of things Parisian.

The first car I remember was the Dodge that my dad bought in 1951 to take us from New York to Los Angeles, a couple of years after we arrived in the U.S.A. Actually I’m not sure of the year, but who is there is ask? I do remember that the car was olive green, had a ram’s horn that sat like a trophy on the front of the hood, and my dad had bought it new for the big cross-country trip. Come to think of it, it looked something like that black Peugeot that could have taken my parents around Nice. When he started working as a gardener, he drove a Dodge truck. Later, in the 60s, he bought a Dodge Dart. My mom drove that Dart until she couldn’t drive any more. I don’t know why my father was so devoted to Dodge except that they were relatively inexpensive and probably good value for the money. Although Dodge has made some muscle cars, none of ours ever qualified as such and they certainly weren’t sexy.

My hot car days, so to speak, are long gone. They started in around 1965 with the beautiful cream colored 1960 Mercedes Benz 220 SE that my father bought used. That my father would choose such a car at a second hand dealer is a testament to his good taste. At the time it was not a classic, just a manual shift, second hand car. And yet it had the curved lines similar to the old Dodge, classic car lines, in my opinion. And it was gorgeous, with its elegant shape, wooden dashboard, and red leather upholstery. I managed to kill that car on a cross-country drive back from New York a few years later. I don’t know how my father ever forgave me, but actually he took it well in stride and never seemed to hold it against me.

From the Mercedes I moved on to Volvos. Uri and I were together then, in the 1970s, and he got into fixing cars, learning the skills from Jerry who had, and I believe still does, a very special fondness for Volvos and Saabs. He fixed, I drove. We had one Volvo 122S after another until Uri finally fixed us a real cutie: a P1800, just like Simon Templar drove.

That’s pretty much it for the interesting part of my car history. When I got to the point where I felt I needed a crane to help me in and out of the low-to-the-ground P1800, I went on to a newer (but still second hand) Volvo 144 sedan, then a new Toyota. Here in Spain we had a Seat (a Spanish car) and now a Citroen, not the 2 CV of my dreams, but a Xsarra that burns a lot of oil. 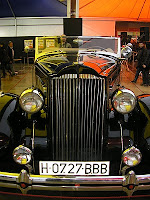 Not being a car collector, however, is no reason not to go to a classic car show. I went to one the other day not only because I like old cars, but also because it is so deadly boring where I live that I look for any diversion that isn’t too far away and is not too expensive. Four euros is cheap enough and frankly, there is nothing for sale inside at a classic car show that I would be tempted to buy, except maybe the cars themselves, but I can’t afford any of them – not even the old beat up Citroens -- so it was safe from a shopping point of view. 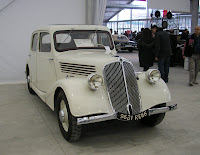 The classic car show was in Reus, in the same convention center as the antique show we went to a few weeks before when Manuel bought me that lovely German clock (that still wakes me up during the night when it bongs). Although Manuel hates cars, he says he likes the old ones, so we went together on a Saturday morning. I was expecting to see the same sparsely populated rooms, but no. This time it was packed. Clearly old cars are far more popular with the people here than old stuff.

First we viewed all the Minis on display out front. There must have been fifty or more, a bunch of VW bugs, some Seats 500 and 600, and a few odds and ends (including, of course a 2 CV and a 2 CV truck). Cute, but not worth the price of admission. But then we hadn’t paid to get in yet. 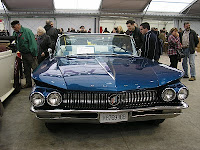 Inside was a treasure trove of antique cars. Well worth the four euros. I didn’t take notes – just photos, so I cannot document the make and model of any of them. There was a Model A and Model T Ford, Bentley, Mercedes, Citroen, Renault (no Volvos), even a 60s Buick with fins, and makes I never heard of. But data wasn’t important to me. It was the aesthetic experience that I was after and it was very satisfying. 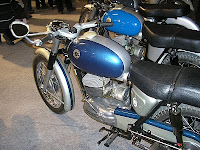 Not only were there cars, but motorcycles and scooters too. The only ones I noted were the Bultacos because Rocky owned one before I knew him and had a Bultaco sticker on the back of his Karmann Ghia when I did know him, and the Vespa because I thought that was what Jerry used to ride when he traveled around town with his dog Sparky, but he tells me that his scooter was a Zundap Bella, the Rolls Royce of Scooters that my father selected and his father paid for. I realize now that my father didn’t particularly like to shop, and he wasn’t flashy or showy, but he did appreciate quality. 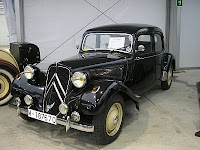 I’m sorry my Dad couldn’t have come to the show, just like I’m sorry, from time to time, that he isn’t here to taste some of the wonderful food, or to see the excellent Spanish athletes play soccer, tennis, or riding bicycles. I wonder which car in the show he would have liked best.  Maybe this Citroen?  Simple and classic.
Posted by Dvora at 8:17 PM