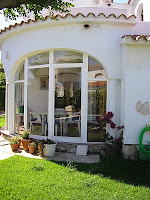 Calling my home a villa sounds pretentious to me, but that is the standard term here. When I think of a villa, I think of a romantic, or maybe an elegant, or even a rustic house with a lush garden. A villa sits on a winding, tree-lined, preferably country road, not on a suburban grid like here. Grids may be practical but they are not romantic whereas villas are. I looked up “villa” in the dictionary and found various degrees of approximation to the truth: “(1) a country residence or estate, (2) an imposing country or suburban home of a wealthy person,” or bingo, “(3) Brit. a detached or semidetached house.”


So, Manuel owns one villa and I own another (both with swimming pools) and we rent out both during the summer to holidaymakers, mostly Brits, but also sometimes to Russians, Czechs, Poles, and Norwegians. Manuel has a small in-law apartment tucked in behind his villa, and during the summer, while the visitors are holidaymaking at my villa, I go and stay with him in that tiny apartment.

I manage the business (and reap the profits) and my advertising consists of year-round ads I place with two online companies where vacationers can rent holiday homes directly from owners. I don’t know if you can imagine my surprise when, on 30 May 2009, I received an inquiry through one of them from an Irene L, the L being the first of a long string of letters of a distinctive last name. 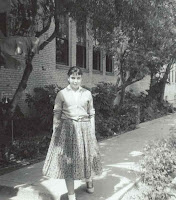 Irene was my best friend growing up. We met in the first grade and were best friends through grammar school and junior high, drifting apart in high school until I drifted across town with my parents and ended up graduating from LA High. After that we didn’t really stay in touch, although we did meet once, about fifteen years ago, at a reunion at Dalya’s in Santa Monica.

A while back I started thinking about Irene and tried to find her on the internet. I found someone with that name who had written for the LA Times, but didn’t get any further. I’ve never mastered internet or any other kind of research, and in a little while I gave up.

Then, that Saturday in May, I read this inquiry for the villa: “are you the Dvora formerly known as Dorothy B. that I grew up with in LA, CA?” 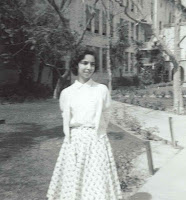 I was stunned and wrote her back immediately. “Yes, this is me. Where are you? What are you doing? How did you find me? Are you coming to Spain?” What a strange coincidence that Irene should want to rent my villa.

But Irene wasn’t looking for a villa to rent in Spain. She had the same idea I had had, to find her old friend, but she went about it with more ingenuity and more determination than I had.

She wrote me back. “I'm so glad that I found you! I'm plotzing!” Ah, familiar words that you never hear in Spain from where the Jews were expelled in 1492 and where only a handful have returned. Thus, here people do not plotz or shlep, and there are no klutzes, shlemazels, nor nudniks, although there is the occasional ganef.

There is something very lonely about being the only one of your kind for miles around. I feel almost like

, although he had it worse being the last of his while I only suffer from being alone.

It turned out that I had inadvertently made her search much more difficult that it might have been if I had just left things alone. “I actually started looking for you a few years ago. It took me that long to figure out your current name. Every once in a while I would try again but usually came up with nothing. I didn't realize that you changed your name from Dorothy to Dvora.”

Irene looked for combinations of both with my maiden name. Then she wanted to pair both with my second husband’s name, but all she could remember was Joe. She went on with Dorothy and my first married name which led to someone, but not to me. Who would have thought that I was using a new first name and, although married three times, the family name of my first husband (who is like a brother to me). No, I hadn’t made it easy.

Having several names during the course of my life has caused me many problems recently, what with the bureaucracies of foreign governments whose citizens do not change their names, not even for marriage, and who don’t seem capable of understanding that I am who I say I am. And in fact, I don’t really want to be Dvora any more. For one thing, the Spanish can’t say De VOH ra because that means to devour and sounds ugly to them. So they say DE voh ra, which I don’t like and which isn’t me. Dorothy might be nice. There are a handful of people, Jerry foremost among them, who still call me Dorothy. I kind of like that -- makes me feel young again.

“Finally, I Googled Dvora Treisman & the pieces started falling together. I found your ‘Notes From Barcelona’ in a 2003 OWA newsletter. Could this possibly be you? Then I found the name Manuel L. linked with yours. It looked like you might have been married in Reno. Is that correct? It's amazing what you can find online.” Yes it is. It’s actually a bit disconcerting.

Irene went on, “I had no idea that you moved to Spain! I found some other items that you wrote, and thought it might be you when I read about the Polish mother in L.A. Then, I found your home rental ads and thought I'd take a chance.”

Irene always was both forthcoming and shy, so it took a little bit longer for her to actually DO something. Apparently as with many of us, wine helped. “Last Friday night, fueled by some wine and egged on by a friend, I sent the e-mail. I'm so happy that I did!”

Irene and I have been in regular contact ever since. I tried to get her to come with me to the Vaughan English program at Gredos last fall, (see the blog post of October 2009) but she couldn’t. Eventually we agreed that, if I could manage (afford!) a vacation this year, we would meet up in France. Last year’s bookings (i.e., my income) were a disaster and I didn’t think I would have enough to even get me through the year. But so far I’ve managed and this year promises to be better, as I’ve already had some bookings (and deposits) for this summer. Those deposits are helping to carry me through (not that the E-store on this blog is getting me anywhere). If I have enough total bookings, I will be able to buy groceries and cat food and go on vacation in the fall. If you live in northern Spain, going to southern France is pretty easy and not too expensive.

So that is our current, tentative plan. Irene and her husband Marty will travel to Europe, and after a couple of weeks either she or both of them will meet me in Avignon where we will spend some time together after which Irene may come and visit with me here for a while (unless, God help me, I’ve sold my villa by then). All these details have yet to be worked out.

We’ve already exchanged a few bits about our youth, but Irene suggested that we wait until we’re together and then compare notes on what we remember. This will be a real treat for me because, having no brothers or sisters, and no old friends close by, I have no one to do that kind of sharing with. So, better than a booking, my ad has given me a long lost friend.
Posted by Dvora at 6:10 PM