Brigitte Bardot has joined the protest against the Spanish torture of bulls immortalized by Hemingway and called the corrida. Catalunya, being more progressive than the rest of Spain, is in the midst of a big internal fight to make traditional Spanish bullfighting illegal. In fact, there are only two bullrings where the traditional spectacle takes place: one in Barcelona (the second Barcelona ring is being converted to a shopping mall) and one in Tarragona – a city I find much more Spanish than Catalan.


Being more refined isn’t the only reason for the move to ban bullfights. Bullfights symbolize Spain, and many Catalans want their symbols to represent their own unique culture – things like the human towers, the sardana (the very staid Catalan national dance, about as opposite from flamenco as you can get), and the Catalan donkey that replaces the Osborne bull in Catalan iconography.

But bulls aren’t the only animals mistreated in Spain. Dogs and cats don’t fare well here either. I was appalled, when I lived in Barcelona, at the number of stray dogs and cats on the streets. Here, in the middle of nowhere, it’s the same. There are huge colonies of abandoned or feral cats in towns and countless stray dogs wandering the roads and highways. As a matter of fact, these dogs running free has made my walking alone stressful rather than enjoyable.

Statistics from 2006 say that in Catalunya, every day 47 dogs and 20 cats are abandoned. That’s 16,732 dogs and 7120 cats a year and that’s only in Catalunya, not counting the rest of Spain. People get pets – mostly puppies -- for Christmas and then abandon them when (1) they get too big (there are those who don’t know how big a full grown German Shepherd is), (2) they figure out that pet food costs money, (3) they go on their month-long vacation and suddenly realize they don’t know what to do with the animal (and don’t want to pay for boarding). I’ve seen those dogs on the side of the roads. I guess people just put them there as they drive off for vacation. I remember one dog in Tarragona whose owner had simply left him out on the street for the month of August. It was a small dog, and he was frantically running around looking for food, and probably for his owner. I saw the owner with the dog later in September. At that point the dog was limping; the owner didn’t seem concerned. There is also the end of the hunting season which accounts for almost 12% of the dogs that are abandoned. 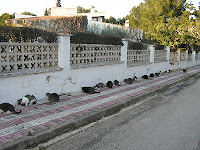 The people here where I live who take care of the stray animals are predominantly foreigners. Johanna, who is Dutch, is the local cat lady. She feeds a colony of cats near me, captures them and takes them to the vet to get them sterilized, and generally takes care of them, paying for it all out of her own pocket. Over a year ago, when Minnie turned up on my front step, it was Johanna who I called to help me figure out what to do. She’s the one who went with me to introduce me to her vet in Miami Beach. (Yes, Miami Platja is about ten minutes down the highway!). 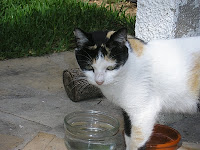 I didn’t plan to adopt Minnie. She was hungry and wounded and I couldn’t ignore her. But I thought I would take her to the vet, get her fixed up, take care of her for a while until I could find her a home or place her at a shelter. Well forget the shelters, they are overflowing. And forget finding a home. Most people here don’t want cats. One German woman collects some and then takes them to Germany for adoption. But at the time, her facilities were full. I’m sure some people must have cats, but I don’t personally know one who does. 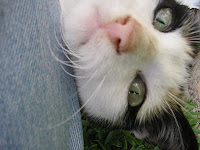 Minnie, whose proper name is Minina, got better and ended up staying. She’s a sweet cat, even if she does scratch and bite me sometimes. I know she isn’t being mean; she just doesn’t know any better and I don’t know how to teach her. She used to sleep in the spare bedroom,. But eventually she found her way on to my bed where the inevitable happened and she now keeps me warm at night and company during the day.

Common wisdom is that cats are solitary, independent creatures who don’t look much for company. But like all the cats I’ve ever had, Minnie is happiest when she is near me. Generally when I leave one room to be in another, within five or ten minutes, Minnie is there too. And for all that she isn’t a lap cat, she will sit on my chest in the morning, stare directly into my face and meow when she thinks it is time for me to get up and feed her. 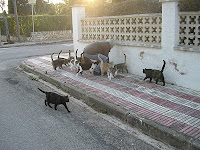 When Johanna the cat lady went to the Netherlands in early December, she asked me if I would take care of the cat colony while she was gone. I didn’t really want to – I find them so pitiful and the whole thing so depressing, that I would rather just not have to face it. But of course I couldn’t say no. These cats present a problem that I don’t know the solution to, and if what I have to do is feed them for a while, I will. 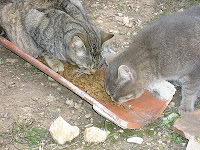 There are about 18 of them – sometimes more, sometimes less. Sometimes I feed them on the sidewalk and other times in the empty lot where Johanna put some ceramic roof tiles to hold the food. In either case, the idea is to make lots of portions so the cats don’t have to fight with each other in order to eat and the weakest can also get fed. The roof tiles lend a feeling of calçotada to the enterprise, although I’m sure I’m the only one who notices that. Johanna’s 20-kilo food supply ran out a long time ago and I’ve been buying it ever since. I talk to them a little when I feed them, but in general I don’t pet or interact with the cats even though a couple of them are pretty friendly. I don’t want too strong a bond to develop between us.

When I came last Monday, I found that the black and white, the one with the black spot on his chin, the one who is the most outgoing and friendly of them all, who always rubs against my legs and who runs to be the first at each new pile that I put down (and I put down at least 20), and who generally is under my feet and really annoying came late, walking very slowly and limping badly. He is the one I always talk to, telling him to go away! He’s a nuisance.

I was very distressed to see him in this state. Next day I talked to another cat woman, this one in the village, who suggested that I wait a while to see if he doesn’t heal himself. They often do, she said. But when I went back on Wednesday he was the last to arrive, walking even more slowly and clearly not getting any better. His injury didn’t seem to affect his appetite, but when he hunched down to eat, the foot on his injured leg twisted under his body and seemed broken.

I went home but couldn’t sit still. I couldn’t just leave him like that. I decided I would go the next day, get hold of the cat and take him to the vet. If he needed to be kept indoors, I would set up the extra bedroom and he could stay there while he recuperated.

I always go in the late afternoon to feed the cats, but I was in a hurry and went the next morning instead. He wasn’t among the cats that showed up for this special breakfast, making me even more distressed, worrying that I had waited too long and the cat had died. Guilt struck.

And yet, maybe that was just as well. After all, he is a homeless cat, taking him to the vet might turn out to be expensive, and not knowing what was wrong, I didn’t know if the vet would even be able to help him. But deep down I didn’t really believe that. This little cat has too much spirit to give it up so quickly. He was more likely napping than dead. After all, regular feeding time was around 5:30 pm. So I went back again before 6 and he turned up. I got him into the cat carrier, and took him to the vet in Miami. While waiting my turn I spoke with a German woman who had brought in a small puppy, one of four that had been dumped alive in a garbage container. One died the other two were at her house, and this one needed some medical attention. We discussed the sad situation around us, where many Spaniards feel it is “unnatural” to sterilize domestic animals, but then throw the litters out onto the street or worse, into the garbage. I left my wounded cat to spend the night and get X-rayed in the morning.

I was so relieved, I cried driving home. The vet had looked him over and appeared positive about his overall state, so it seemed hopeful, and I was glad I had brought him in. No more guilt.

The next day, Friday, I went back to the vet and they asked me if the cat had a name. A name? He’s a stray. No, he doesn’t have a name. They confirmed that the little guy has a broken leg. They could do surgery, but they suggested that the break might heal without it, so we will hope for that. They are keeping him there a few days so he can stay in a small enclosure – the less he moves around the better until there is some degree of ossification. I will probably keep him here in the extra bedroom afterwards for a while, depending on how long they suggest, so that he doesn’t have to go right back out into the street in this incredibly cold weather and can have additional safe time for recuperation.

The vet knew the cat. They recognized him because he has a little piece cut in his ear to indicate he had been sterilized. That means that Johanna has already invested time, money, and effort with the cat. I am glad I followed up.

This last Tuesday I called the vet, thinking I would be picking up my stray and bringing him here to continue his recuperation. But they seemed to think that he should stay there longer. They had either done a second X-ray or taken a closer look at the first. I believe they were telling me that the bone had been splintered. However, I did clearly understand that his injury was the result of being shot. Shot!

I may live out in the middle of nowhere, but my nowhere is in the middle of an urbanization – a kind of suburb. That cat (who I think should be called Felix) lives in the center of it, just two blocks from my house. Are people here shooting cats? What kind of person would do that? The same kind that throws live puppies in the garbage and enjoys watching bulls being tortured to death. 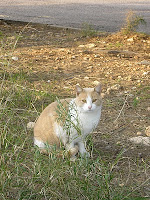