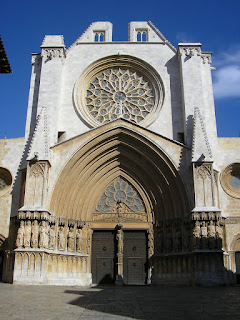 Late in 2004, when we were living in Tarragona, I decided to embark upon a dream. It wasn’t a lifelong dream, but something I had been thinking about for some years and that stemmed from my unabashed materialism. I love things. This may sound strange coming from a self-proclaimed socialist, but it’s true. And that’s not to say I simply like stuff. No. I’m picky. I want things well-made, hand-made, possibly functional, and certainly beautiful. So when Manuel suggested I open a business, I decided I would open an arts and crafts shop.


At the time, I was plagued by two problems, one of them being how to make a living. Opening a business could solve that, if only because I wouldn’t have to find someone willing to employ me. After five years of forms and lawyers, I still was not a legal resident and therefore not allowed to work or own a business. Manuel said I could put the business in his name until I had my papers. Surely, after so many years, it was imminent!

Mired in a financial and relationship crisis, I didn’t know if I should stay in Spain or return to the U.S. If I went back, I couldn’t afford California, so I would have to go somewhere new – I thought Pittsburgh. It had a lot going for it, plus my stepson and an old friend lived there. I was relatively certain that I could at least land a clerical job, whereas making a living had been a problem in Spain. Of course there would be the question of health insurance. So part of me thought I would go back for practical reasons, but another part of me thought I should stay here where my heart was. I had put a lot of effort into learning the culture, history, and language of my new home, and I didn’t want to throw all that away. Besides I had adopted Catalunya as my home, and I didn’t want to leave it. I thought it would help me decide if I talked to some of my friends. And in fact it did help. 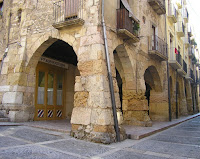 I’m glad to have friends who don’t mind offering advice. When I read the various email, a few struck a chord that resonated. Hearing it from someone else, rather than ruminating over and over, made it easier to see what fit for me and what didn’t.

Toba expressed concern for my old age. She thought I should live in a place where the cost of living was low and where I would have friends, an important consideration when I grew older. She didn’t think that opening up a shop was a good idea because it was risking money, and she thought it would be safer to go to Pittsburgh, get a job, and make friends.

My reaction was that I can’t be assured of having friends when I’m old no matter where I live. When my mother was old, her best friends were newly made. All her old friends had either died, moved away, or become incapacitated themselves so that they no longer were able even to go out and socialize. Old age is often a lonely time and a problem anywhere, but in Spain I would at least have good, free health care.

Then there was the matter of risking money. I don’t like thinking about money. I’ve never had much and never figured out how to make more. I could set a limit of how much I could afford to risk and plan around that.

Evie’s response felt right. She said I should live where I enjoy being. It’s not good to be too preoccupied with the future because most of it is not in our control. “People make plans and God laughs,” is a quote she sent me. So best to enjoy what we can now, preferably without shooting oneself in the foot.

Randy said he thought that like him, I had found a place I loved to be. He figured that was worth a lot and if I could work out a way, I should stay. 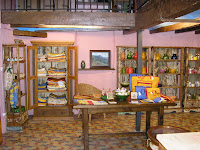 The shop turned out to be an incredible personal experience and achievement for me, even though it ended up being a financial failure. I am still proud of what I created, but sorry I didn’t do it somewhere else. I think the main problem was location – not the street or neighborhood, but the city it was in. 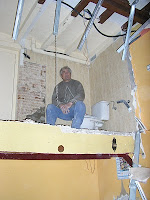 The remodeling was splendid, turning a truly ugly space into an attractive one. I had never remodeled anything before and it was a bit scary when Francesc, the indomitable paleta (mason), had torn out all the useless walls. But what fun when he started putting it all together.

We ripped out the ugly plywood panels that some former tenant had put over the walls and ceiling. There was old stone wall and beamed ceiling underneath. Plastered walls received a pink tint, to blend with the lovely 100-year-old floor tiles that were a faded red and blue on (what was once) white.

The stock was varied and wonderful, all things that I, and most of my friends, would buy in a minute if we were out shopping. But in fact, very few American tourists ever came in, although those who did, and the few Japanese, were my best customers. Unfortunately, very few Americans or Japanese come to visit Tarragona and the local public is mostly lower middle class with a taste for cheap Chinese junk. One local lady came in a few times to chat and to tell me that my colorful, 100% cotton, Provençal tablecloths were more expensive than the dull, drab, synthetic Chinese imports they sold at the mercat. 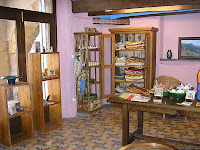 My location should have been perfect – under a beautiful Renaissance-era arcade, just at the foot of the cathedral. But retired Spanish groups on bus tours would walk by and never stop, and the locals, coming and going from the nearby Saturday market, didn’t even bother to look in. Even when it rained, people tended to walk out on the pavement rather than under the evocative covered arcade. 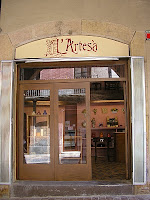 I called it L’Artesà (The Artisan) and stocked it with products that would appeal to tourists and locals alike. They were mostly things that were either hand- or traditionally-made. I had decorative and functional ceramics from Catalunya and Provence, colorful table linen from Provence, Catalan folk music CDs, marble coasters and clocks from Italy, soaps, cosmetics, and candles from the company Occitane, marmalades from Catalunya and Provence, exquisite Catalan chocolate, antique button and hand-beaded jewelry, and odds and ends that I would pick up at the antique flea market and then resell. Finding all these was great fun, born shopper that I am.

I never had a big closeout sale. I was too angry. If my neighbors couldn’t enter, much less buy, while I was in business, they sure as hell weren’t going to tread over my dead body to get bargains when I closed. Like the cat in Nicole Hollander’s cartoon who dies and goes to kitty heaven, I was going to take it all with me. Some of the things that were on my store shelves now decorate my house and fill my kitchen cupboards, a few are in the homes of friends, and the rest are stored in Manuel’s basement. Some day, when I live in a place near a decent flea market, I will sell off what’s left to an interested and deserving public. L’Artesà was both my biggest failure and my greatest achievement, and I’ve never really been sorry that I did it. 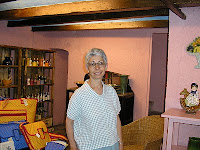 P.S. The struggle to make a living continues (although the matter of residency has been resolved). If you ever buy products at Amazon, you can help this poor expat by buying through the shop on this blog. You don’t have to buy my products (but take a look, you may like what you find, Catalan chocolate included). Entering Amazon through my store means that anything you buy during that visit will earn me a small commission, and very little bit helps. Thanks!
Posted by Dvora at 7:20 PM