Some time back I read No Great Mischief

by Alistair MacLeod with an online book group. To me, this tale of a Scottish clan in Cape Breton, Canada is more than the saga of a family, it is about the extinction of a species – the species in this case being a culture. I find this phenomenon just as sad and disturbing as when it is the extinction of a species of animal. A culture with its history, language, stories, literature, music, food, way of being and thinking, cannot be revived once its members are no longer members and no longer speak the language and sing the songs. The thousands of cultures that make up our world are one of its greatest treasures and, in my opinion, deserve as much protection as turtles and owls and whales. Someone in the book group asked why Zulus and a couple of other groups were mentioned in the book. I think it was because they are also on the point of becoming extinct.

I live in Catalunya where the Catalans are doing their best not to become extinct. They are constantly fighting to have their language taught and used in the schools, used on commercial signs, used in court proceedings, used when they dub movies, so that it doesn’t become yet another dead language. They fight to have Catalan introduced as one of the many official languages of the European Union, and they fight to be able to have Catalan national teams play in international competitions, as do the Irish and Scots of Great Britain. These battles are fought with the government of Spain. 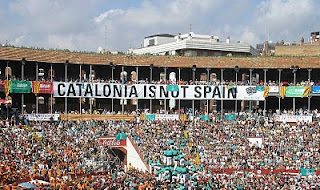 On 12 December 2009, many Catalan towns had a vote on whether or not they wanted Catalan independence from Spain. This vote was not an official referendum as that is illegal in Spain. It was merely put forth as a point of information. Even so, it was criticized and threatened with being declared illegal and legal actions taken. It doesn’t make much sense to me that in a democracy, people can’t have a referendum on something like that if they want it.

One hundred sixty-five towns held the unofficial non-referendum poll and they had an average of about 30% participation. That’s not bad for an unofficial poll. The highest turnout was in the Garrotxa, in the center of Catalunya. Two hundred thousand people voted all together and the vote was overwhelmingly yes for independence.

In No Great Mischief, when the narrator brings his brother Calum home at the end, there is no one to greet them as there had been on other occasions; there is no piper, and the policeman who stops them asks if they are the MacDonalds who make the hamburgers. Clearly the clan is in the process of disintegrating and soon there will be nothing left of the Highlanders in Cape Breton. Without that community, there soon will also be no Gaelic spoken in Canada, and all the songs and stories will also die out, except those that are written and saved for folkloric purposes, like those songs we saw performed on the museum website that one of the book group members sent around.
Posted by Dvora at 11:25 PM