Onions. Lots and Lots of Onions. 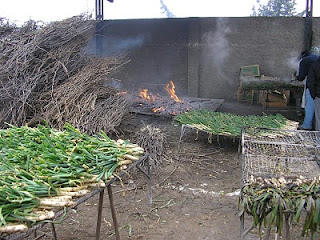 The Catalans have a unique onion that they eat voraciously every winter and spring. The white part of this very special onion is extra long, making it look a little like a leek. It is especially tended to grow that way, with the farmers heaping dirt around it, so that it ends up with more edible, sweet, white flesh. This outstanding onion has the legal agricultural protection of a D.O. like wine and olive oil. The only area that can produce an official version of this nonpareil onion is Valls, in the Baix Camp, a little west of Tarragona.


The onion is called a calçot. Calçots are not simply eaten, they are celebrated, and the resulting event is called a calçotada. As the people of Valls say themselves, La calçotada ja no és només un àpat, sinó que també és una festa (the calçotada isn’t just a meal, it’s a party).

On the last Sunday of every January, the town of Valls holds a festival – their famous calçotada – that attracts thousands of people from all over Catalunya who come to gorge on the local delicacy. But don’t think that people are just standing around at this festival eating onions. They do stand, the tables are laid out in various public squares throughout the old part of town and you eat standing up. But you don’t eat calçots plain. There is no such thing as a calçotada without romesco sauce.

Romesco sauce can be made from peppers, almonds, hazelnuts, tomatoes, garlic, salt, and oil, but that is just a generalization. There are probably as many variations of romesco as there are cooks. The most typical pepper used is the medium-mild nyora pepper, but since you can only find it here, Colman Andrews, author of Catalan Cuisine

, says a substitute could be the ancho pepper. So, the calçots are roasted over a fire made from vine cuttings, then put into a container (wrapping in several sheets of newspaper works well) and set for an hour to steam. They are then brought to the table laid out on a ceramic roof tile. One takes a calçot, blackened from the grill, pulls down the burnt green part, dips the white into the romesco, and voilà! Onion heaven.

One doesn’t have to go to the festival in Valls to enjoy a calçotada. Many restaurants around Valls and throughout Catalunya offer calçotades during the season that goes from November through April. At a calçotada, the first course will be the calçots, of which you will be expected to eat at least a dozen. They are served with romesco and farmer’s bread, for sopping up any leftover sauce. 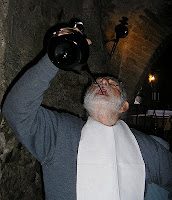 Next comes grilled meat, usually lamb and sausage, sometimes chicken and rabbit as well. This is accompanied by grilled artichokes, blood sausage, and cooked and then refried white canellini-type beans. All this is washed down with red wine drunk from a porró and cava. The porró is a decanter with a long spout from which you pour wine directly into your waiting, open mouth. The spout never touches your mouth, so one porró can be shared around a table. Your head must be tilted back and the porró well aimed. Starting and stopping are the most challenging parts. Best to either be born Catalan or spend considerable time practicing, preferably in private, before attempting this intricate drinking maneuver. Dessert is usually crema catalana, (crème brûlée) followed by a fresh orange.

Even in restaurants, the groups for calçotades are usually large, often a dozen or more people. But we went just the two of us the other day. I had made a reservation at a restaurant called Cal Ganxo in Masmolets, just outside of Valls, that had been recommended by Julian, our friend Trini’s brother. He is a regular there and insisted that there was no better place. I think he may have been right.

Cal Ganxo was once a masia (a Catalan farmhouse) that has been converted, with its outbuildings, into a very charming, rustic, multi-room restaurant. We sat in the celler, as instructed by Julian. The porró filled with red wine was already there waiting for us when we were seated. I opted to drink from a glass. It’s safer. Manel, who is a bona fide Catalan and a porró expert, managed to spill a good amount of wine on the table, so I’m glad I didn’t even try. From that ignominious start we went on to have the best calçotada ever. 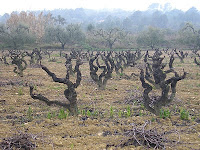 Calçots may look a little bit like leeks, but they have little else in common. Their taste is mild, almost sweet, and their texture is silky. They may not look too appealing when they arrive at the table all charred, but they are wonderfully tasty and these had the best flavor and silky texture of any I’ve eaten. The meat that followed was juicy and tender, the blood sausage was delicious, the beans were perfect, the wine was good, and I never even tried the cava since I would be driving. I thought maybe my tummy would object later to having been fed lots and lots of onions, but no, tummy was happy and made no sign of protest as we drove home through the winter vineyards.
Posted by Dvora at 11:17 PM