Voting is Sacred in Catalunya 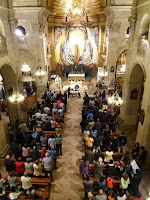 Last Sunday the Catalans tried to vote on a referendum asking them whether they wanted to form a new state or not.  Meanwhile the Spanish police, who ostensibly were sent to confiscate ballots and ballot boxes, also spent a lot of their energy that day breaking doors and windows of schools and gymnasiums, bludgeoning people young and old, pulling women along the ground by the hair and one they dragged by the mouth (yes, and there are videos).  At the end of the day emergency services reported they had attended 844 persons.  By the next day that number had risen to 893.  The physical damage to the public property, all of it done by police (there were no riots) totaled 300,000 euros.  The Catalan government will be filing a complaint with the court naming the Spanish National Police and Guardia Civil.

At many of the polling stations people tried all kinds of ingenious ways to hide the polling boxes from police so they wouldn't be confiscated (obviously at some personal risk).  One school hid its box in the space at the top of the elevator shaft.  Others kept moving from room to room in a cat and mouse dance with the police.  But the volunteers in Vila-rodona were the most ingenious of all.  Watch the video and see where they did their vote count.

In the end, in spite of the repressive activity of the thousands of Spanish police who were sent from all over Spain, over 2.2 million of the 5.3 eligible voters cast ballots that were counted.  Close to 800,000 people either could not vote because their polling station had been closed by police, or their votes were lost because, as the Catalan spokesman said, "the ballots were stolen."   The total number of eligible voters is 5.3 million, which means that participation (actual votes counted) was at 42.34%.

It is expected that the Catalan Parliament will declare independence this week.