The Community Spirit in Catalan Demonstrations

With the Spanish government using all means at their disposal to stop the Catalans from voting on a referendum that the Spanish say is very illegal, the Catalans continue to protest and demonstrate for democracy and freedom.  They do it peacefully, sometimes with humor, and especially in these last few days, with a great sense of community spirit.

While the big demonstrations draw crowds of tens of thousands to a million or more people, this week, just days before the scheduled vote on Sunday, the demonstrations in support of the referendum (that many say is perfectly legal, but in any case, in what kind of democracy is voting illegal?) have been small in scale and very large in terms of the community spirit they show.

When Spain sent in hundreds of their national police to printing presses and small town newspapers where the police entered and seized supposed referendum materials (some of those searches and seizures done without benefit of court order) the Catalans protested peacefully, singing and placing carnations on the police cars.

When Spain obtained three large ships to house the thousands of national police that were being sent from all over Spain and two docked in Barcelona while the third docked in Tarragona, the stevedores announced that they would not service those “ships of repression.” 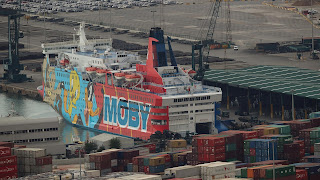 When Spain realized that it was undignified to have Looney Tunes characters painted bigger than life on the sides of one of the ships destined to house the national police, someone decided to cover Tweety, Sylvester, Daffy, and the Tasmanian Devil with large tarps. 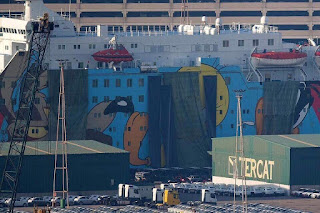 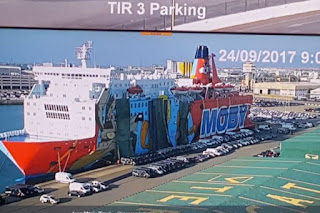 This caused the Catalans to start a campaign to Free Piolin (Free Tweety) and Tweety was incorporated into the visual imagery of the right to vote campaign.  Never mind that by the next day, the tarps had fallen or blown or were taken off and Tweety was once again free. 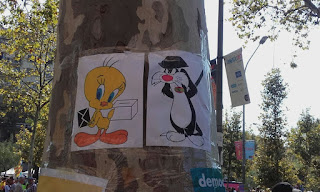 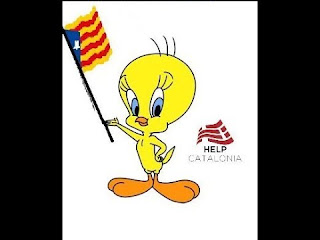 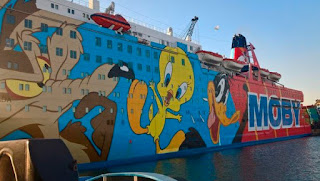 What we’ve had this week has been, among other things,
1.  High school and university students calling a strike on Friday (no school was held) and holding informative sessions and demonstrations in support of the right to vote.

2.  On Thursday, more than 300 firefighters came to Barcelona from all over Catalonia, to hold their own demonstration and hang a giant poster at the history museum in support of the referendum and the right to vote. 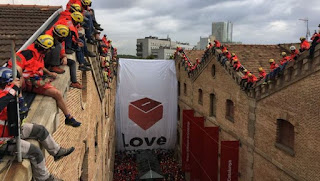 3.  Also on Thursday, more than 700 school teachers, principals, and administrators came to Barcelona, to the Palau de la Generalitat, the seat of the Catalan government, to symbolically give the keys of their schools to the President of the Generalitat, making those schools available for the voting on Sunday.  Those schools are the usual sites of the polling stations in all elections and they did this under threat of prosecution by the Spanish government. 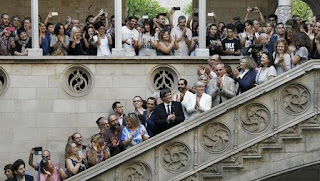 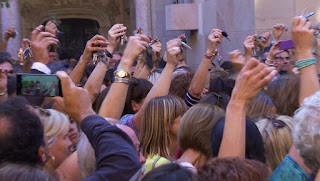 4.  Then, on Friday, several thousand farmers drove their tractors from the countryside throughout Catalunya, causing all sorts of slowdowns on highways and city streets, as their tratorcades came to the largest city in their area -- Lleida, Girona, Tarragona, or Barcelona, to show their support for the referendum and their right to vote. 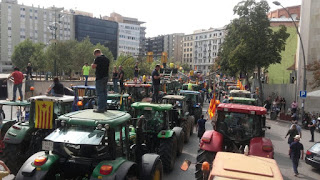 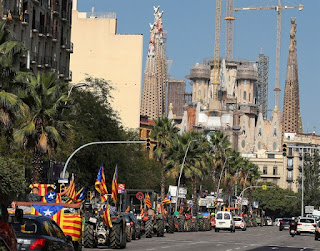 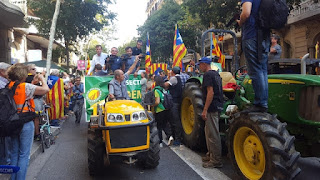 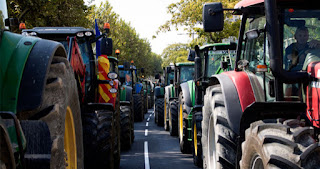 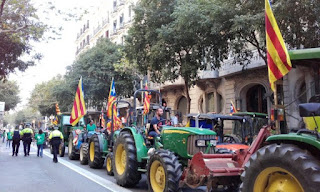 5.  And finally, starting Friday afternoon and continuing until the polls open on Sunday morning at 8 am, there has been an organized effort to keep the schools open.  This involves people actively occupying hundreds of public schools that will serve as polling stations on Sunday.  Over 60,000 people are participating in this marathon initiative that is being carried out throughout Catalonia by parents and other members of each of the communities where the schools are located.  It was done to prevent the police from blocking entry between Friday afternoon when the schools closed and Sunday morning when they are supposed to be opened to people who come to vote.  These groups have many activities planned for adults and children, and many brought sleeping bags to spend Friday and Saturday night there.  They’ve had food brought in by the box to feed everyone, and as in all these demonstrations, there is a festive spirit and a strong sense of community. 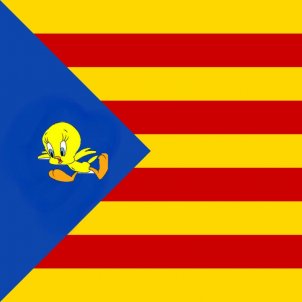 Photo and image credits: all found on the internet
Posted by Dvora at 8:47 PM