The Legitimacy of the Catalan Referendum 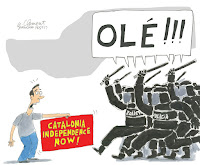 I didn't write this, Tom Harrington did, and it was published in ARA on 5 October 2017, the day after the Catalan referendum on independence was held:

"One the more popular arguments now being employed but those who are against the separation of Catalonia from Spain but who do not want to be seen as lining up with the political philosophy and violent tactics of the Rajoy government is the following:

"I'm all for the Catalans being able to vote on independence. But there is no way that we can use a referendum such as the one that took place on Sunday as a basis for such a change. It simply did not meet the basic level procedural rigor needed to legitimate such a momentous social transformation".

As first glance this seems like an extremely reasonable posture. Who is against doing things, especially historically momentous things, with the highest level of procedural rigor? Certainly not me.

When, however, we subject this argument to a few basic queries, it's essentially disingenuous character becomes readily apparent.

Do you remember all the procedurally pristine processes that led to the independence (and, in numerous cases, subsequent rapid entry into the EU) of countries like Kosovo, Croatia, Slovenia and a long list of others? I don't either because they didn't take place. And I certainly don't remember any of today's legion of new born "proceduralists" raising any objections about it then.

What took place was that EU leadership class led by Germany saw in these countries a new set of relatively virgin markets that were also filled with low wage labor that would allow them to serve, In Emannuel Todd's Words, as Germany's "Near China".

Arguably more important than this was NATO's –which is to say the US's– desire to surround the former Soviet Union with countries loyal to its geopolitical aims. They knew that by pressuring the Europeans to swiftly acquiesce to the independence of the newly declared independent countries of the east, they could quickly corral them into serving as part of the US's emerging anti-Russian coalition, an absolutely essential element of the American's long-term geopolitical plans.

In addition to avoiding these realities, the new army oh-so-concerned proceduralists obviate the fact that from the very beginning of the current drive for independence in 2010 it has been the Catalanists who have talked constantly about the need to carry the referendum off in the most transparent and clean way possible, only to be told again and again by the Spanish state that there is nothing to talk about.

To hold up pristine procedure as a fatal strike against the Catalan cause when their interlocutor will not allow talks about proper procedure to even begin, is tantamount to ostracizing a woman who finally walks out the door of her house after having had her perennial requests for a peaceful, no-contest divorce dismissed out of hand by the man she no longer loves.

Finally, if there is one thing that established states can always do, as we saw on Sunday in a particularly crude way, it is to sabotage the "procedures" of the incipient states within their borders. To appoint the potential saboteur of the procedure, in this case Spain, as the judge of proper procedure in the region seeking independence, is to hand the established state an effective veto power sine die in the conflict.

I don't remember anyone granting the Serbs or the Russians this absurd privilege. Why are supposedly liberal and democratic people bending over backwards to provide the Spain with this outsized prerogative?

Keep these things in mind the next time some apparently well-meaning person tells you they'd be in the lead car of the train for the Catalan "right to decide" were it not for the lack of procedural guarantees in last Sunday's referendum."
Posted by Dvora at 3:48 PM

Email ThisBlogThis!Share to TwitterShare to FacebookShare to Pinterest
Labels: Catalan referendum on independence