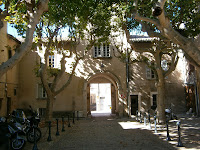 In France, some plans got changed.  First, there was this bus ride.  I had gone from Avignon to Arles by train and intended to return the same way.  But somehow or other I had bought, from the vending machine, a ticket for a bus rather than the train, and that bus was just about to leave from in front of the train station.  It was a matter of going to wait in line to exchange the ticket and risk missing both the bus and the train, or getting on the bus, in spite of the fact that while the train does the journey in 20 minutes, with the bus it would take over an hour.  Then again, what was the hurry?  And as it was Saturday and the transportation system was running on the reduced weekend schedule, it might be wise to grab what was at hand.


It was a pleasant journey accompanied by eclectic music from an oldies but goodies radio station that the driver had cleverly chosen.  Starting with Edith Piaf, we then heard the French Partisan song, some French rock and roll and some 1970s American pop.   To cap it off we arrived in Avignon earlier than scheduled.  There is no music on the train so overall I would say that I was happy with the switch.


Although I had the next day planned out, in bed that night, I couldn’t get to sleep.  Sunday is the big weekly antique fair at nearby Ile-Sur-La-Sorgue.  It’s one of the biggest antique markets in France and something I very much wanted to see.  But because it was Sunday, the public transportation would once again be limited.  And in this case, very limited.  My only morning option was a bus that left Avignon at 9 am.  Returning in the afternoon I would have the choice of a bus if I wanted to return a little earlier, and a train if I wanted to return a little later.


So why couldn’t I sleep?  I didn’t know.  But when, eventually, I realized that I didn’t have to go, that I could change my plan, that I could sleep as long as I liked and do whatever I wanted, and I decided that I wouldn’t go, I relaxed.


I would walk to Villeneuve-Les-Avignon.  It’s about an hour’s walk, across the Rhone River.  I love the walk and I love being in the pretty village of Villeneuve.  I had planned to visit Villenueve on another day when they had their weekly market, but I could go twice.  Sunday I would visit the Carthusian monastery.  Et voilà.  I could turn off the alarm, relax, and go to sleep.


I didn’t get to see the famous antiques market, but I did stumble upon two unexpected flea markets.  What a surprise.  The first was right in town, along several blocks of one of my favorite streets.  It looked like a neighborhood affair.  It was amazing to see some very fashionable women rummaging through other people’s used clothing.  It doesn’t happen here.  For the most part, Spanish women find secondhand clothes disgusting. 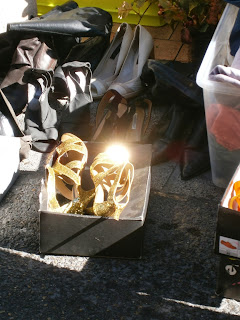 Then, further along there was a big flea market on the Ile de la Barthelasse.  I made a small detour and went.  I didn’t buy anything at either flea market, but had a good time poking around under the huge plane trees. 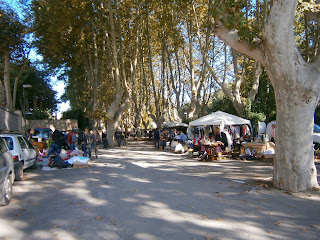 So much for the Carthusian monastery.  Another plan out the window.  I had enough time to amble around a little and then have lunch.  A very good lunch, as it turned out, and not at the old favorite that I had intended to go to.  No, I decided that as everything else was new and unplanned, so should lunch be.  So I went to a place I had read about and it was lovely, even the bathroom. 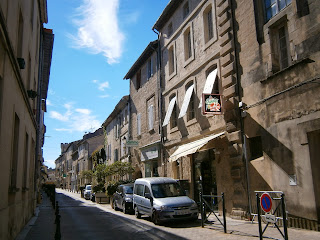 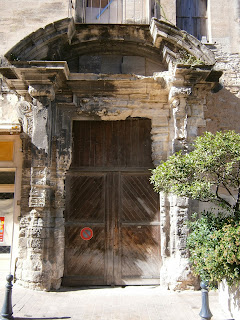 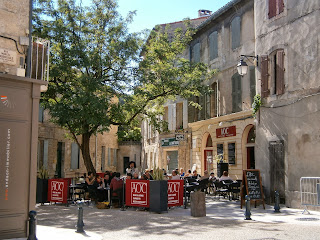 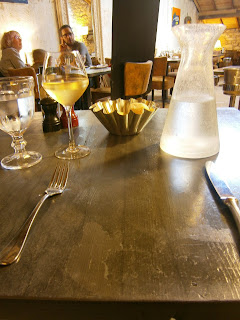 Email ThisBlogThis!Share to TwitterShare to FacebookShare to Pinterest
Labels: Villeneuve-Les-Avignon