Connections should come from somewhere and go to somewhere.  So says Slim Kallas, European Commissioner for Transport in talking about Spain.

This novel idea has not caught on in Spain, which still builds on the medieval urban plan, where all roads radiate out from the center, which is Madrid.  This, of course, makes for the situation of "you can't get there from here" and forces you to backtrack in order to go forward.

In general, creating infrastructure for business to flourish has not caught on.  Spain has more high speed train track than any other country in Europe, but for much of the journey along the Mediterranean, freight trains coming from or going to France (and the rest of Europe) still share a single track with conventional commuter and long distance trains.  This means frequent waits at stations to allow another train to pass on the single track.  In all the twenty years of high-speed building, nothing has been done to upgrade the conventional freight or passenger rail system.

Then there is the new container port in Barcelona.  Paid for by Chinese investors, the Spanish government couldn't get it together to put in the promised rail link that would connect the new port to that above-mentioned rail line and left it stranded.  The Catalans, knowing that they need these kinds of facilities in order to live long and prosper, came up with a quick fix.

We could talk about airports where no planes ever take off or land, or Olympic-quality sports arenas in tiny villages.  And we could talk about corruption at all levels of government and in every ministry, and even in the Royal family.

What Spain lacks is what the Catalans call seny, which means understanding, good judgment, or common sense.  It’s no wonder that the Catalans, who value seny and consider it one of their characteristic traits, want out.

Under Spanish law, public buildings must fly the Spanish flag.  But in Catalunya, there are some towns that don’t want to, and only have the Catalan and EU flags hoisted.  In order to avoid legal problems, one small town decided that, since it doesn’t say what size the flag has to be, any size will do and thus, in their good judgment, they have hoisted this. 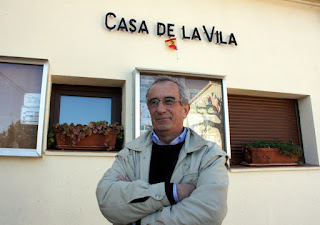 For more related reading, I recommend the following:
One of the best articles I've seen about Catalan Independence from an economic point of view, from The Guardian
http://www.guardian.co.uk/world/blog/2012/nov/22/catalonia-independence-business-economy-spain

Translation of an article in a Catalan newspaper, about the problems with Spanish economic policy
http://www.collectiuemma.cat/noticia/they-should-keep-their-mouths-shut-ara

Not about economics, this 60 Minute piece (a 13-minute segment) about the Barcelona Futbol Club talks about a lot more than just soccer that is so good, it was broadcast last night on Catalan television after the Barcelona-Malaga soccer match where Barca won 5-0!
http://www.cbsnews.com/video/watch/?id=50138328n