In fact, I have always celebrated Christmas.  My family had a Christmas tree every year when I was growing up, and throughout their lives, we always exchanged gifts at Christmas.  When I was married to Joe, a lapsed Catholic, I would have a tree.


I also light candles for Chanuka and usually make latkes.  I send Chanuka cards to friends who celebrate it, and more generalized holiday cards to others.  I’ve even made my own holiday cards.  I like celebrating holidays and Christmas is one that is hard to avoid if you live in the western world.  I don’t celebrate the religious meaning of Christmas (nor of Chanuka, for that matter).  But as an enjoyable winter holiday with good food, gifts, cards and letters to friends I haven’t seen for some time, and sentiments of peace and goodwill, it works for me.


Since coming to Catalunya, I have adopted the caganer as my one and only Christmas ornament.  The caganer (shitter) is the uniquely Catalan figure that squats and shits somewhere in most people’s nativity scenes at home as well as in many shop windows and that, for me, is the most endearing characteristic of the Catalans.  A people that has invented a little figure smoking and shitting and puts him near the figure of the baby Jesus when they celebrate Christmas, is a people that deserves its own independent state.  A caganer is also often included in public nativity scenes, as in the one put up by the City Hall of Barcelona in the Plaça Sant Jaume.  Not surprisingly, it is never included in nativity scenes at churches.  Mine doesn’t sit in a crèche, it just sits on the shelf.


I have read about the caganer but no one seems to know how it originated.  They say it represents the Catalan character: a wee bit irreverent, unpretentious and down-to-earth, with a trace of humor.  This also works for me.


But he who thought I don’t celebrate Christmas was right in one way.  Christmas is not a holiday you can celebrate alone, and this year, I didn’t really celebrate.  I did make a slightly fancier lunch than usual and bought myself a nice pastry, drank better wine, and ate torró, the Catalan Christmas candy.  But lunch was in front of the television, as usual, watching the midday news.  Eventually, I took the caganer for a walk around town. 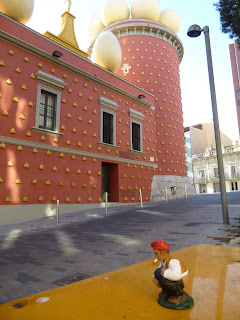 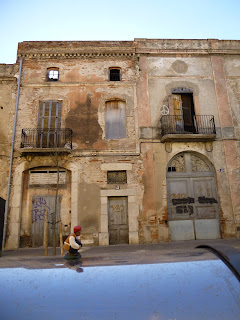 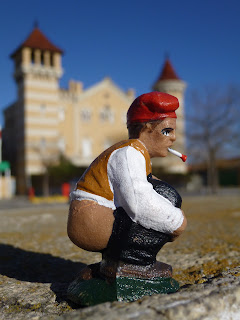 Email ThisBlogThis!Share to TwitterShare to FacebookShare to Pinterest
Labels: Caganer