The Castle and The Candles

When I lived in Barcelona I always went to the big and bountiful Santa Llucia Christmas market that surrounded the cathedral.  But this year I’m not in the mood to travel to Barcelona so I’ve targeted more local venues.
Without having to travel at all, right here in Figueres the Christmas market is a much more modest affair with about eight or ten stands, some selling food and the others decorations for Christmas trees or more importantly, figurines and supplies for nativity scenes.  Although I don’t do Christmas decorations, I do make the one exception of displaying the Catalan figure of the caganer (shitter) every December.  It doesn’t seem particularly religious, I don’t think my parents would object (in fact, I think my father would love it), and it is one way of participating in Catalan culture!
The Figueres Christmas market would have been disappointing except that I didn’t really have high expectations in the first place.  The Collioure Christmas market was a different story.
My friend Jaye lives not far across the border in France and she suggested that we go.  It’s a food and an arts and crafts market; she had been before and liked it, and she was right.  The level of artistry and craftsmanship was very high.  It was a pleasure just to walk around and look at what these artisans were up to.
I didn’t take photos of all the beautiful things.  I felt a little self-conscious and didn’t want the artists to think I was carrying out commercial espionage.  But I did take some photos of the castle that housed the fair.  Because this fair wasn’t just a bunch of stands standing outdoors, held hostage to the elements.  This fair took place in the Chateau Royal de Collioure where, in spite of being in a castle, we were still hostage to the elements.
The Chateau, originally built by the Templars in the 12th century, was, 200 years later rebuilt and used as a part-time residence by the Kings of Mallorca and Aragon.  It couldn’t have been very comfortable to live in as most of the rooms don’t connect and one has to keep going outdoors to the courtyard to duck  into the next room.  This made for exciting browsing as the weather was blustery with the fierce tramuntana wind that threatened to knock us over as well as some spots of rain.  But we persevered and managed to see it all, stay erect, and not buy a single thing!  All those beautiful handcrafted works of art and neither one of us bought even one.  It wasn’t that they were too expensive or that we were too cheap, it was because, for my part, I didn’t need anything, and, I have finally realized, that just because it’s beautiful, doesn’t mean I have to buy it.  It was because I have finally grown up. 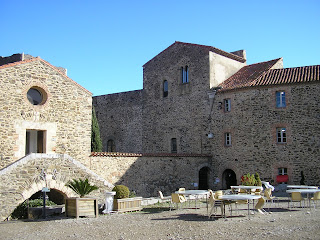 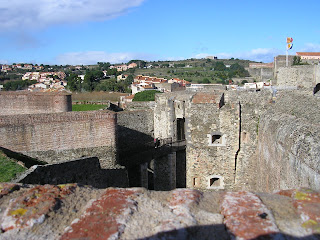 I didn’t need anything because I have already finished my Chanuka shopping.  Two weeks before, Jaye and I had gone together to Perpignan.  Her agenda was to go to an Asian grocery to pick up some ingredients, and mine was to find the Kosher shop where I planned to buy Chanuka candles.  Originally Jaye was going to get to Perpignan early to get her shopping out of the way, but I told her I didn’t mind going with her to the Asian grocery and joked that maybe I would find my candles there.  Not to laugh.
When we arrived in Perpignan we went first to the address I had found for the Kosher shop.  I was a little worried because when I looked up the address on Google maps, it showed a car repair shop.  Still, I had some vague hope of a miracle.
As Google had warned, the address did yield a car repair shop, so we went on to do other things, saving the Asian grocery for last.  Once there, while Jaye was collecting her supplies, being a great fan of browsing in any interesting food shop, I had a look around.  I was enjoying myself, going up and down every aisle when all of a sudden, zap!  Guess what?  There were packets of candles that, although they didn’t have Hebrew on the packaging and didn’t come in mixed colors, seemed to be the same size as Chanuka candles.
My Chanuka candles this year are all white, they were made in Thailand, and they fit my chanukiah perfectly.  Two friends had offered to send me candles, but no need.  I traveled two hours to a city in France and, in an Asian grocery, found the perfect candles that were made in Thailand.  For modern times, modern miracles. 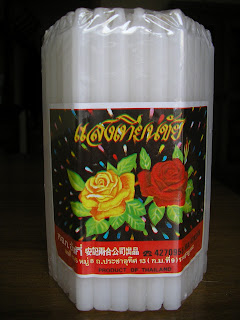