The Catalans are inching their way to independence.  Later this evening the two majority parties (CIU who will head the government and ERC who will lead the opposition) will announce their agreement for the running of the next session.  Monday the new Parliament will hold its first meeting, and by the end of the week the President will be elected.  This will be Artur Mas, the fearless leader who did not start the current rampage for independence, but has taken it upon himself to carry it out.


As the Catalans quietly and peacefully move down their road, Madrid is on the attack.  They attacked Artur Mas in the second week of the two-week campaign with unsubstantiated accusations that he has bank accounts in Switzerland.  This accusation was in the form of a police report “leak” to a Madrid newspaper.  After the election was over it was discovered that the “leak” did not come from any Spanish police agency and that there was no such report.  Hopefully someday someone will discover where the phony material did come from and those responsible for that smear will be brought to court for willfully disrupting the democratic process.


It was interesting at the time, that when Artur Mas asked the Minister of the Interior to explain where the report came from, the Minister’s response was it was not for him to explain but for Artur Mas to explain about his accounts in Switzerland.  If anyone had any doubt that Spain was a Third World country, the response of that minister alone should have resolved that doubt.  Cynicism in Spain is a national pastime.


That episode may have cost CIU and Artur Mas some seats in the parliament, but if so, they went to ERC, a Catalan nationalist party that is even more supportive of independence than CIU.  This means that they will need to work together to make this next legislative session a success, and so it is that they have been meeting and discussing and will announce their agreement tonight.


After the elections were over, the Spanish government and Madrid newspapers all celebrated the fact that CIU had lost and that independence was a dead issue.  I suppose they did that for dramatic effect. It was easy enough for a grade school kid to add up the numbers and see that this was not true.  I think most Spaniards who do not live in Catalunya read the Madrid newspapers and watch Spanish television (here most people watch Catalan television) and unfortunately don’t think for themselves, so the general public probably believed what its government leaders were saying.


But as I posted recently, the pro-independence parties won a majority of the seats in the new Catalan parliament and anyone who can add, or who can use a calculator, could have figured out that the Madrid politicians and their newspaper friends were lying.


So this last week the Spanish Minister of Education launched a new attack, this time on the use of the Catalan language within the Catalan school system.  Without going into the details, this new proposed law would be equivalent to the Federal Government in Washington suddenly dictating how all schools in every state were to be run, changing the curriculum of each state to conform to a national curriculum, and dictating that final exams for graduation would be written in Washington and sent to each state to be implemented.  Except that here there is more at stake because it would mean the elimination of Catalan as the language used in Catalan schools.  This would be a grave attack on Catalan culture and identity.


The Catalans are having none of this and have protested.  It doesn’t look likely that Madrid will back down, in which case I think the Catalans will take the matter to the Spanish Constitutional Court since it is each autonomous community that is responsible for its own educational system and not the central government.  Or, they will simply go ahead and conduct their schools as they have been.  It seems to me that day by day, the independence movement is gathering more supporters as Madrid becomes more and more hostile and antagonistic to Catalunya.


But just so you know that I do more than watch the news and marvel at Spanish cynicism, this week I made a brief trip to Girona.  I went to see the Christmas market but found it very small and disappointing, so took a few photos of the parts of town I found lovely, down by the river. 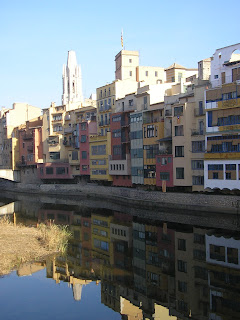 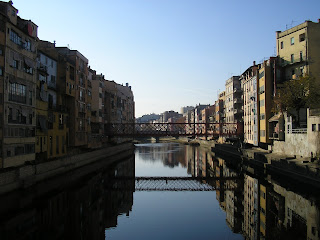