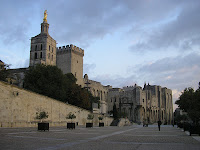 France was wonderful.  I won’t go into a detailed account of all the sights, there are guidebooks that can do it better.  But the guidebooks can’t tell you what I liked best, so I’ll do that.


I had already been to Avignon four times and to Arles twice.  Why go again, you may ask.  Why not go somewhere new?  Well because I was traveling alone, not for the first time, but this time I didn’t feel I had the energy to explore.  I wanted to go away, spend some time in a place I love, EAT, and relax.


And I must say that when I got off the train and started to walk into town it was almost (not quite) like being at home.  I knew this place.  Well, I knew it to a point.  There was the same bakery, mostly the same shops, the small park, the same big tourist-trap bistros on the Place de l’Horloge, and the same unique, humongous Palais des Papes.  But where was my hotel?
My old hotel couldn’t accommodate me so I reserved a room at a new place.  Not really new, it’s in a 17th-century mansion, but new to me.  Finding it was a bit of a challenge.  I went the right way, (although I saw later it was not the shortest path), but until I consulted my map, I wasn’t entirely sure I was on the right street.  Tiny streets in the medieval part of a European city are crooked, winding this way and that, and often, each time they cross a street they change their name.  I don’t think they had urban planners in the middle ages.  To top it off, you have no idea how annoying and noisy it is to roll your suitcase over cobblestones, so the sooner I arrived, the better.  Talk about relaxing. 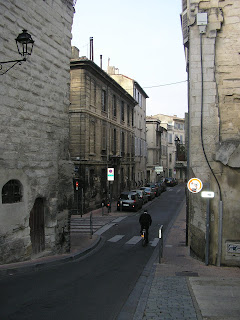 But relax I finally did and in the end I would say there were four highlights to this trip.  The first was meeting up with an American expat in Arles and spending the day with her, tooling around a brocante fair, having lunch, and sharing our expat experiences; the second was walking over the Rhone River(on a bridge) to Villeneuve-Les-Avignon; third was walking along the rue des Tenturiers, hands down the prettiest and most evocative street in Avignon; and fourth was my experience at the café that for four days fed me my breakfast.


I’ll start with my walk to Villeneuve because I would say that that was where I experienced my happiest moment.  I crossed the Rhone sur le pont d’Avignon, although this was not the bridge of the song.  That bridge, (called Le Pont d’Avignon but officially named Pont St. Bénézet), built in 1185, was, sadly, partially washed away in 1660 at which point the people of Avignon decided they had had enough and finally gave up repairing it each time the river flooded.  Nevertheless, a good hunk of that bridge still stands and you can go dance upon it if you wish.  Manel and I walked on that bridge on our first visit to Avignon and in fact, I have a cute photo of him dancing there.  But for crossing the river, I used the modern Pont Edouard Daladier  which successfully spans the entire width of the river and the Ile de la Bartelasse, to get to Villeneuve-Les-Avignon, a village just on the other side. 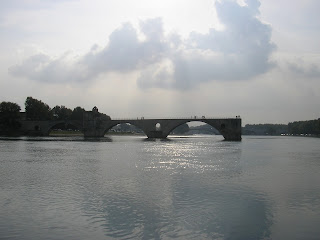 The walk from Avignon to Villeneuve is about three kilometers and I loved every centimeter of it (never mind the blisters).  Standing part way out on the bridge and looking back over the river towards the city, past all the flat canal boats, I felt my heart sing.  I’m so glad I ventured out and took that walk -- a walk I’ve done every time I’ve visited Avignon.  Everyone has their image or images of paradise and this is one of mine. 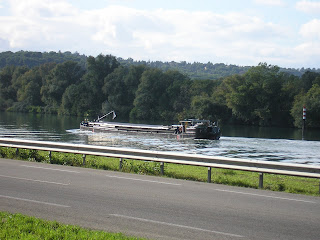 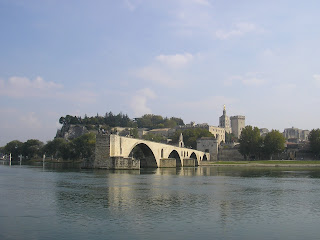 Bucolic Villeneuve is a pretty village that sits alongside the river, where once the King of France kept an eye on the Papal goings-on across the river in Avignon. 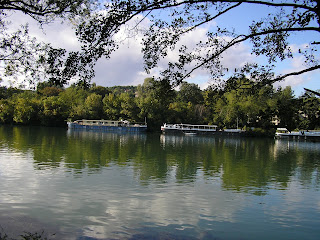 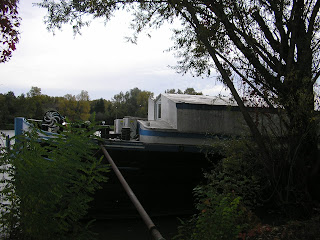 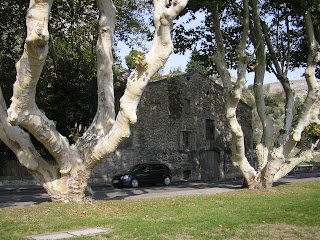 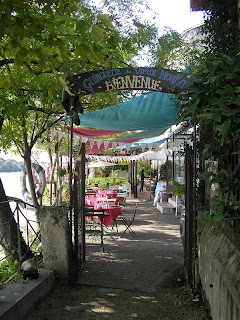 In Villeneuve, you can find the Carthusian monastery Chartreuse du Val de Bénédiction, the 14th-century Fort St-André, and my favorite of the three, the Abbaye St-André with its beautiful terraced gardens.  I had in mind a visit to the gardens, but by chance, I wandered into town on market day so I spent my time browsing at the market instead. 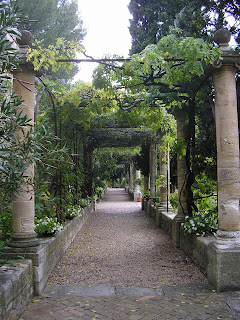 It was mostly a food market with a few shoe and clothing stands.  I found interesting cookies and bought two hard sausages, one with thyme and the other with lavender from a Frenchman wearing a jacket with the Barça insignia.  But the biggest pleasure was just being there, walking beneath the huge plane trees, watching people shop, soaking up the ambience, and wondering once again if I should move to France. 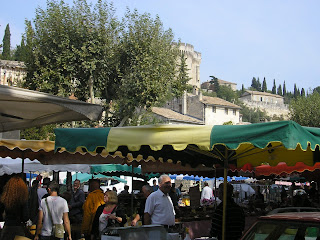 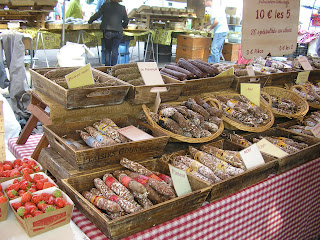