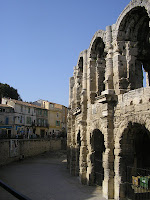 On my recent trip to Avignon, I also spent a day in Arles, one of my favorite places.  One of the reasons I love Arles is because Vincent van Gogh, my favorite painter, lived there for some months and being there allows me to see some of the places he painted and feel closer to him.  Arles is where he lived in the Yellow House, where Gauguin came to live with him, but ended up only spending some weeks.  The climax of that ill-fated visit was when Vincent mutililated (not cut off) his ear.  His illness was certainly not caused by Gauguin, but their stormy relationship probably contributed to making it worse.  This attack was the first of several episodes, probably a form of epilepsy, that he suffered from for the rest of his life. So visiting Arles, for a van Gogh fan, is necessarily a pilgrimage. The other reason is simply that it is a very pretty place to be. 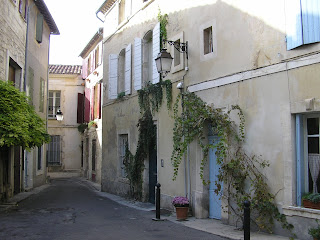 This trip, going to Arles was a double pleasure because in addition to being able to spend a day in a place I love, I also got to meet one of my new friends who I got to know through the internet.  Delana is an American who lives in Aix-en-Provence.  Delana moved to France about four years ago and in the last year we have corresponded a few times.  She was kind enough to make the journey to Arles one day during my stay so that we could finally meet and what else?  Go treasure-hunting at a brocante fair. 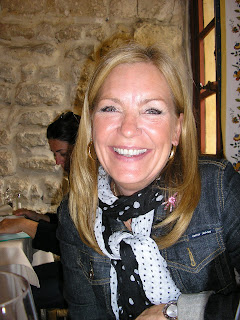 Delana is a sucker for old linen, especially linen bed sheets.  But we combed through all the stalls, not just the linens, because we both know that at an antique/collectibles fair, you never know what you might find.  And we did find two treasures, neither one of them linen, both made of leather.  These were two fine leather bags, Delana’s in the form of a backpack, and mine in the form of a battered little handbag with a lot of character which I was assured was a designer bag, although which designer the lady couldn’t say.  It doesn’t matter.  The bag is clearly a one-of-a-kind (now, if not when it was new) and I will remember my great day in Arles every time I use it. 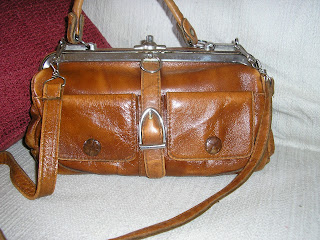 Brocante shopping wasn’t my only spree.  I always pay a visit to the second-hand clothing stores in Avignon where you can often find designer treasures.  There I scored with an Eric Bompart cashmere cardigan that suits me perfectly, adding to the Avignon second-hand stash that I already have at home.  Lots of good memories hang in my closet.

﻿ Delana writes a blog www.delana-dujour.blogspot.com and recently started a Provençal rug business.  You don’t have to travel to buy her Provençal rugs, they’re online at www.provencerugs.com.


My most surprising and genial experience in Avignon took place at the café near the hotel where I went each day for my morning coffee and croissant.  There was a very cute, young waiter (maybe the owner) who, by my second visit, already knew I wanted a café au lait et un croissant.  (Week after week, the waitress in the café here in Figueres where I go on Sundays has never given any sign that she has ever even seen me before – not so much as a nod.)  He encouraged me to use the little French I knew while he practiced his superior English.  On my first visit he was friendly, explaining the difference between a café au lait and a café crème (the former has more milk).  On that second day¸ he made me feel at home.


There were two days when I went in quite early for my coffee, and both times there was a group of eight or ten men sitting together at several adjacent tables.  This was a small café and they were taking up about half of it.  At first I thought they might be work colleagues having an early morning meeting even though some were dressed in business clothes and others were dressed casually.  But they didn’t all leave together.  And not only did they leave at staggered times, I noticed that some didn’t pay on their way out.  I asked the friendly waiter about them.  He told me they were friends who met before work every day.  The first man who left had paid for them all.  Apparently they take turns.  What a nice way to start the day – so much nicer than taking your coffee to go in a styrofoam cup and drinking it alone in your car.


My last day I went to pay and told the waiter au revoir, that I was leaving.  He gave me three kisses on the cheeks and wouldn’t take my money.  He said I had been a loyal client for the duration of my visit and this last breakfast was on the house.  Whoever says the French are unfriendly, needs to visit this café.