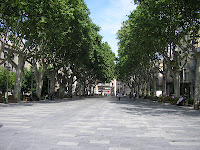 The most famous thing to see in Figueres is the but I visited it once years ago and for me, once was enough.  I’ve been enjoying just walking up and down the streets, seeing what the city -- my new home -- has to offer.  I’ve found where I will be taking my knives for sharpening, I’ve found a good wine shop that will offer wine tasting coupled with food in the fall, and I’ve found a few secondhand shops – one where I bought my new secondhand stereo that has made the apartment much more like home – and another where I might buy a couple of badly needed wooden bookcases.  Then there’s a “vintage” shop that has the look of pricey about it, but it wasn’t open when I first went round, so I’ll find out more on Saturday, when hopefully they will be open.  “Vintage” implies treasure hunt to me, and even if I don’t buy anything, the search is usually fun.
Last Sunday I took off for the Castell de Sant Ferran which is less than half an hour walking from the apartment, although a good stretch of it is walking uphill.  I expected to find a medieval castle but instead arrived at an 18th century fortress.  I’m not much for military history, but since I had climbed all the way up there, I decided I might as well pay the price of admission (reduced for people of the third age such as me).  And in fact much of the architecture was pleasing and overall it was worth the visit.  This was the site of the last meeting of the Catalan Parliament before it went into exile during the Spanish Civil War.  Taken over by Franco’s army, the Republicans later bombed its perimeter heavily and that damage remains to this day.  The castell can house up to 6,000 men, occupies a space of within a perimeter of , and is the largest 18th Century fortress in . 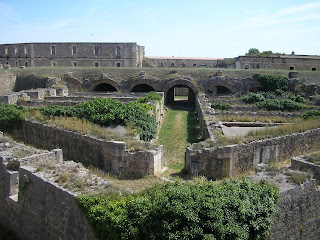 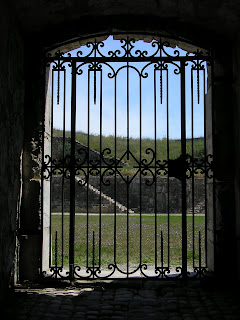 This last Wednesday there was a free concert at the Esglesia de Sant Pere, Figueres’ patron saint and its main church.  The performance was given by a children’s choir come all the way from .  Their voices were lovely.  I didn’t know most of the repertoire except for a choral version of Let It Be that worked well, and the heavenly Panis angelicus by Franck, the solo sung by a young boy with a heavenly voice.  It was music for the soul. 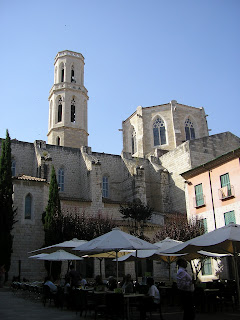 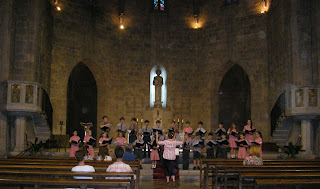