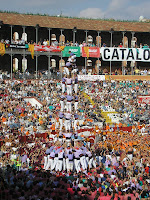 Castells – the human towers that the Catalans make -- are so special that I think they deserve another mention here.  Castells are unique to Catalunya.  As an expression of Catalan culture, they stand for working as a team, making an effort while enabling the spirit of personal achievement.
A team (called a colla, which means a group) might have dozens and sometimes hundreds of members.  The members vary in age from about 5 to over 80.  It is one of the very rare activities, outside of family gatherings, and probably the only sport, that brings people of such disparate ages together. 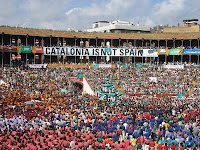 There are 7000 castellers (people who make castells) belonging to 54 colles.  Altogether they make 16,000 castells in a year.  The groups compete starting in spring and running through summer.  They perform at the festa major (the festival honoring the patron saint of the town) of their own town or village and are invited to perform at festes majors in other towns as well.  Every time a team performs, it is competing.  The teams get points for the difficulty of the construction and how well they pulled it off, that is to say, whether they succeeded in building it all the way up, and then were able to dismantle it without falling apart.
The large base upon which the rest of the tower is built is called a pinya (which also means pineapple).  To fer pinya (make the pinya) has come to mean to work together in Catalan, an expression that originated in this sport and has become part of normal speech.  It is usual to see people from other colles helping make another team’s pinya, thus enlarging upon the meaning of cooperation.  You can tell from the colors of the shirts at the base when other teams join in.
It’s the small children who climb to the top.  This top can be as high as nine or ten storeys in the best of the castells.  One of the videos below shows what that looks like if you’re up there looking down.  From my perspective of standing on the ground looking up, I have to say that seeing those people, with the small child as the final climber, reach the top and lift his or her hand with four fingers up (representing the four bands of the Catalan flag) it quite simply takes my breath away. 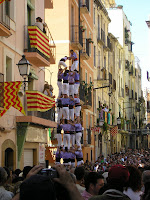 As someone who is not happy past the second rung of a ladder, I can’t imagine standing on the shoulders of another person, who is also standing on the shoulders of another person, etc. on the eighth storey of this living tower.  How do they do it?  They practice and practice and practice.  And either they are fearless or they overcome their fear.  They also practice falling and, those below, how to receive the falls.
The accompanying music is always the same, played by two or more gralles (shrill-sounding wooden flutes) and a small drum.  If I hear that music, even from another room when the television is on, it brings tears to my eyes.  It seems that some people cry in response to things they find very beautiful, and I’m one of those.
Last year (2010) Catalunya succeeded in its bid to UNESCO to have Castells entered on its Intangible Cultural Heritage list.  Flamenco and the Chant of the Sybil from were also included on the list that year.
Any performance is always more moving in person, but if you can’t get here to see one, or if you’ve seen it before and just want to see it again from the comfort of your own home (like I sometimes do with operas) use the links below.  Don’t forget while you’re watching that the pinya, the foundation, is on ground level and isn’t visible through the crowd.  If you’re counting, don’t forget to include it!
If you want to read or reread my earlier post on Castells, here’s the link for that.
Video Links of Castells:
This video, from the UNESCO site, was prepared by the Generalitat de Catalunya (the Catalan government) as part of their application for Intangible Cultural Heritage status in 2010.  You have to scroll part way down the page and the click on “video” to see the film which is almost 10 minutes long.  After a minute, before the narration beings, the cap de colla (head of the team) is shouting out to his group saying they’ve done it!  They made a 4 by 9, which means the tower was of four people on each level and the whole castle was 9 storeys high.  It’s only at the end with the credits that you hear the music that always accompanies the performance.  Actually, the music begins after the pinya is made (sometimes there is a second smaller pinya atop the first called a folre, and for the tallest and heaviest, sometimes even a smaller third called les manilles), and the cap de colla decides he has a viable structure going.  So, if you watch the video and want to hear the music and get the sense of the whole thing, watch it to the very end!
http://www.unesco.org/culture/ich/index.php?lg=en&pg=00011&RL=00364
Filmed by Mike Randolph, the 3-minute video below has no narration, but the music is there and it shows some of the castles falling apart. Shot in in the bi-yearly competition held in the bullring, it’s a good place to shoot because at the festes you stand on the ground and can’t get the same good angles as from the stands.  My best photos are also from that bullring (the only time I’ve ever entered a bullring!).
http://vimeo.com/16392519
This 5-minute BBC production was filmed in Vilafranca in 2010 before the UNESCO decision.  It begins with an advert and then goes into the program in which there are some errors in narration, she has no idea which team is which, (the green team is not the green team, it’s the Castellers de Vilafranca, always one of the top three teams and number one this year) but it’s a good video overall and allows you to get a good feel for the music.  My favorite shot is of the middle-aged casteller with the cigar!
http://www.bbc.co.uk/news/world-europe-11742399
Posted by Dvora at 3:43 PM