You Can't Have It All 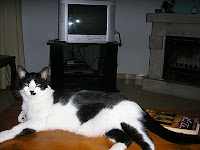 Yesterday as I was watching the news at midday, the electric box switch clicked and the television went off.  I went to look and it wasn’t the main switch, it was the one marked swimming pool, which also happens to include all of the living room and much of the rest of the downstairs, but not everything.  Whoever arranged the switch box was not particularly logical or organized.  They paired the pool with much of the downstairs, but the refrigerator is on a different switch.  Like many things, it is chaotic.  I haven’t made a survey of the rest of the house since it is almost always either the pool or the hot water heater that gives me grief.
I had turned on the pool control earlier in the day when I noticed that the pool was turning green.  I had had a leak and George, who maintains the pool, had come in and repaired it.  It looked like everything was done, paving stones beautifully relaid, but he had forgotten to turn the motor back on.  Well, perhaps it was best that I leave it off until he got back from his short vacation.  How green could it get in three days, and anyway, it wouldn’t work if it kept short-circuiting.
Later, at around 1 am when I woke up to turn over (or maybe a cat woke me up so that he or she could turn over) I heard the switch go again.  But the pool was off.  What could it be now?
Flashlight in hand, I went downstairs to take a look at the breaker box and this time it was the main switch that had plopped down.  Now it couldn’t be the pool because I had turned it off.  Surely this was a mistake.  I flipped the switch back on, tested a light, waited a few seconds, and headed back to bed.
As soon as I got to the bedroom I heard the switch click.  Back down I went, turned off the pool switch, flipped the main switch back on and went back up to bed.  Once again, as soon as I got to bed I heard a click.  This time I decided the switch had won.  I would sleep through the night without electricity, hope for the best with what was in the fridge, and deal with it in the morning.
Morning brought to light the fact that water was dripping, drop by drop, from the hot water heater. A call to my electrician brought him almost immediately.  But unfortunately the part needed to fix it didn’t come today because it’s 7:30 and he hasn’t returned to repair it as he said he would if he got the part in time.  It would be tough to have to go the weekend without hot water, he said.  This is true.
What’s more, the swimming pool was causing a short circuit and the pump had to remain off until Monday at least.  It is getting greener by the minute.
It seems you can’t have it all.  I can have electricity but no hot water for the time being, and I still have a pool, but it’s green instead of blue.
Posted by Dvora at 7:45 PM