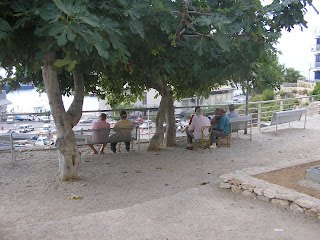 I liked living in the village this summer.  Not that I had much choice; I had to rent out my own house in order to earn some income that would help with my mortage and ongoing living expenses.  I had one other option that friends had offered, but that would have meant staying even further away and being more isolated than where I usually live.  In the village at least I was in the center of things.
Not that there was much to be in the center of.  But I was able to pass many days without having to use my car.  I could simply walk out the door and do my shopping and many routine errands.
On the way to the closest city trash/recycle containers, located in a pretty spot overlooking the port, there would always be a group of people, usually older men, seated under the trees chatting or just enjoying the shade and the view.  Some even brought their own chairs.  They were there morning, noon, and evening.  I thought of them as the local committee and suppose they took a break to go home for lunch. 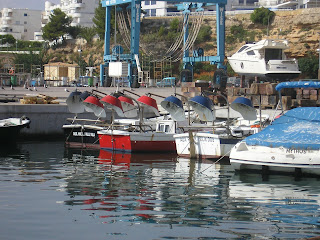 In addition to this regular group, I also noticed men who would carry small buckets or plastic bags full of tiny fish.  Sometimes they dropped one or two for the street cats they passed.  These little fish were sardines, caught during the night by fishermen who have lights affixed to the back of their boats.  These men had bought the fish to take home or sell informally on the street blackmarket.  It doesn’t surprise me that people would go for these healthy little fish that come cheap.  Buying fish in any of the village fish shops is exorbitant.  If you don’t fish or don’t have a friend who does and you live in L’Ametlla, the biggest fishing port in the area, you drive to the inland or go to one of the bigger supermarkets in the area to buy your fish rather than be ripped off in the village fish shops. The cats are ecstatic to be back home, back in their garden where they can go explore and sniff to make sure their territory is secure.  If they sniff anything threatening, they come in and stay in the house!
I’m happy too.  I don’t particularly care about the garden, I just like being in the place that I know is mine and surrounded by my stuff.  But I know I want to sell the house as soon as possible, so rather than put everything I’ve stored away back out, I’m looking to see what I might get rid of in flea markets.  The house has been shown by realtors quite a bit this summer, so I’m hoping it will actually sell this fall.  I may be back home only for a short time before I move on.  I hope so.
Posted by Dvora at 4:33 PM