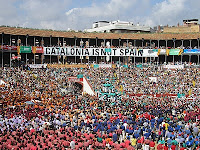 On 11 September 1714 the Catalans, who had supported the Hapsburg claim to the Spanish throne, surrendered to the Bourbon victor. Oddly, this monumental defeat marks the national day of Catalunya. La Diada is celebrated with flags, wreaths commemorating the heroes of that war, speeches, Catalan poetry, and music. Last night I listened to the annual La Diada address of the President of the Generalitat (Catalan government), and later today I plan to go to dance sardanes, the Catalan national dance.


There is talk and there are posters proclaiming that Catalonia is not Spain, and if anything supports that sentiment, the sardana surely does. Compared to the iconic Spanish national dance, flamenco, it is at the opposite end of the dance spectrum. Everyone knows what flamenco music sounds like and what the dance looks like – fiery, almost violent, full of sexual innuendo and manifesting individual pride. Contrast that with the sardana, and you would assume that the two dances came not only from different countries and cultures, but possibly from different planets. 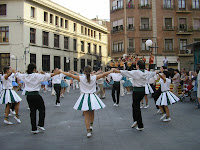 To dance the sardana is to bob up and down, doing one of only two patterns of steps, sometimes with arms down and other times with arms up, in a circle, with no partner required, no evident leader, no individualism, no fire, and definitely no sex. It is staid, some think it is boring, it is danced totally in unison, it has no variety. But when done well, a circle of dancers looks like one living, bobbing organism, and I happen to like that. It is symbolic of what you see a lot of here – community spirit.

Another excellent symbol of community spirit is the uniquely Catalan sport called castells. Castell means castle in Catalan -- you could say these are castles or human towers. The towers can reach as many as ten storeys. Each storey is made of people who have climbed up onto the shoulders of those below while accompanied by the music of gralles, a whiney-sounding flute that sounds like a sick seagull. 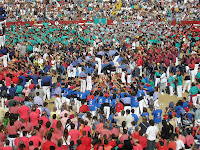 Castells are formed on a square base of four very formidable men, who use their arms to lock themselves into an extremely tight position that will directly support the tower. The weight of as many as nine human storeys, each of two, three, or four persons, will go up above them and will bear down directly on them. The core four are then surrounded by others – dozens of people, sometimes over a hundred -- who hold onto them and each other and provide the buttressing to help the four anchors withstand the weight and pressure from above. This construction is called a pinya, literally a pine cone or a pineapple. To fer pinya (make a pinya) means to work or band together towards some common end. Sometimes a second pinya is formed above the first. Bear in mind when you look at the photos that you do not see the base pinya in the sea of people on the ground.

Once the pinya is deemed solid (by the cap de colla, the director or head of the group) the persons who will make the tower begin to scramble up. Storey by storey they set themselves up, each layer climbing up the backs of those before them and doing it all to the traditional music played by a drum and gralles (small wooden flutes). The castle must be made as quickly as possible – the whole thing takes three or four minutes -- for the weight bearing down on those below cannot be withstood for long. The castle is finished when the top person, called an anxaneta who is usually a small child about 7 years old, holds up his or her hand to signal completion, but the whole thing is not concluded until those who went up all climb back down.

When I watch them make castells, whether in person or on television, they give me goose bumps and inevitably make me cry. It’s an incredible cooperative effort, so suspenseful to watch, and I always find it very beautiful and moving. 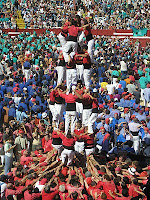 This is THE typical Catalan sport, unique to Catalunya, and is one of the things that sets it apartment from the rest of Spain where the equivalent sport is to torture and murder bulls. Ironically, I took these photos at a special competition that was held at the Tarragona bullring a few years ago! When I wrote on this blog some months ago about the move here to forbid bullfights, someone posted a comment saying that the Catalans are against bullfights only because they want to appear different from other Spaniards. But I beg to differ. Catalans ARE different. Their national sport, the castells, and their national dance, the sardana, contrasted with bullfighting and flamenco, typical in the rest of Spain, demonstrate that difference perfectly. In both there are no stars, no soloists. Both are cooperative efforts of people doing something together and in the making of castells, it is for the simple pleasure of creating something wonderful that lasts only a moment.

Making castells is a popular sport in Catalunya -- children and mature adults all belong to the teams.  It is not nearly as big as soccer, but important enough to be covered regularly in newspapers and on radio and TV. Many towns have a team, the bigger towns sometimes have more than one. They hold competitions throughout the season where they earn points for the difficulty of the construction and whether or not they put it up and then brought it back down without mishap. They always participate and are a highlight in the festes. Castells are one of the grand cultural manifestations of Catalunya.  There is a video on UTube about the castells, narrated in Catalan, if you don't understand Catalan you can still enjoy the images.  If you want to take a look it is at http://www.youtube.com/watch?v=0N6gYDTXk1U 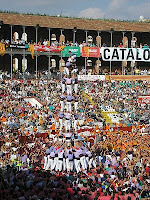