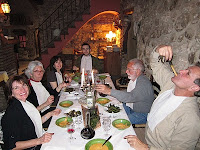 Although not much of a party person, I’ll go to one if invited, there being little else to do. I’m one who prefers the kind of conversation you have gathered around a table with food (and wine). I’m clumsy at making small-talk and then gracefully moving on to the next person while trying to balance a plate of food and a glass of wine, eating, drinking, and talking, all while standing.


Parties can be challenging and they can also be dangerous. At one that I attended last April, an English woman of a certain age, an acquaintance – friend of friends whom I have met many times at such events, we have never hit it off – told me, when I protested that I wasn’t happy with my hair cut, that I should have my face lifted. Not being quick on my feet, I told her I couldn’t afford it. But I mean really, what does one say to advice like that?

When I drove up to a recent party, I pulled in to park next to a couple I know who were just getting out of their car. However, they are young and apparently living life in a hurry and didn’t wait the extra minute so that we could all walk up the hill together. Not an auspicious beginning to a sociable event, but never mind, there was still hope for spending a pleasant and perhaps interesting evening.

In the emailed invitation we were asked to bring a tapa. Not having a kitchen in which to cook, I brought three store-bought pates and little toasts to spread them on. Upon entering the garden where the party was taking place, there was no sign of the host or the hostess. I may not be a big partygoer, but I have seen how it is done in the movies where guests are announced by the butler. I thought in less formal circumstances it was usual to be greeted by a host when one enters, or offered something to drink soon afterwards. But here one simply found one’s own way. I went to look for the hostess and begged for a plate, unloaded the three pates, and headed off in search of stimulating conversation.

People of many nationalities were in attendance: English (the majority), French, Swiss, Dutch, and Catalan. As far as I know, there are only four or five Americans living in this general area: me, a couple I have never met, and the couple who were hosting this party. When they first arrived here, I thought we would have a lot in common and would become friends. But once they settled in they dropped me and threw away my phone number so that now I only see them when there is some group activity.

I engaged in an initial short chat with a Catalan woman whose daughter was spending time in the U.S. As is often the case with roaming Catalans, she doesn’t plan to stay there, preferring to return to family and friends here. I made what I hope was a graceful exit and then spent most of my time chatting with two French women, one of whom I vaguely know from the arts and crafts fairs where we both sell – she, jewelry made of ceramic beads that she makes (very nice) and me, cards I make from my photos. The lady I know is French while the other turned out to be French-speaking Swiss. I didn’t realize the French-speakers were in the minority in Switzerland and that there were three official languages: Swiss-German the big majority, then French, the bigger minority, and finally Italian, a small minority, spoken by a handful.

The Swiss lady spoke French and a very broken Spanish. The French lady spoke French and decent Spanish. I don’t speak Spanish but I do speak Catalan. In spite of the Pimsleur French course I’ve been working on, I can’t manage to say anything in French when I try to use it in public (my brain goes to the Foreign Language section and only Catalan comes out), but I can at least understand some French. So I spoke Catalan, the Swiss lady spoke mostly French (from time to time she would throw in pidgin Spanish and become almost completely unintelligible), and the French lady would speak sometimes in French and sometimes in Spanish and translate for one or the other of us when needed. We all got on just fine.

It was a bunch of work but we managed to converse for quite a while in this trilingual manner. Although tiring, it was good mental exercise, and I do need all the mental exercise I can get -- I’ve already forgotten the French lady’s name, but the Swiss lady is Giselle. Like in Swan Lake, she said. I may be wrong, and didn’t want to question her about her own name, but I thought it was Odile in Swan Lake; Giselle is another famous ballet and was one of my mother’s favorites. Good I kept that to myself because eventually I was invited by Giselle for a real Swiss fondue, ladies only, but not until December when the proper cheese can be obtained. I’m hoping that I will have moved away by then, and Giselle says she is trying to sell her finca (a country property) and would like to move to Albi. But in the more likely and unfortunate event that we will both still be here, I will be very pleased to go. I love fondue. Takes me back to the 70s – to my youth when we all had those fondue pots we were given as wedding presents. Maybe by December French will actually come out when I try to speak it. 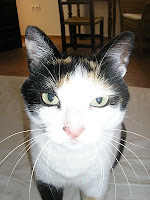 But danger lurked at this party too. I was introduced by the parking lot woman to another young English woman whose name escapes me. Hola, she said. Hello, I answered. DeVOra she said. Your name is very harsh, she told me. It sounds like devour. That isn’t very nice, is it? Nice meeting you, I said and walked away. Moving on suddenly became easier.

I hiked over to where my English friends were sitting, ate and chatted with them. Unlike me, some of the invited guests had actually prepared food, some of which was very good: a fine potato salad with tuna, seito (tiny marinated fish), several good looking omelettes (all of which I passed on, afraid of my egg allergy acting up), curries, and a dynamite bean salad. I really wanted the recipe for that bean salad, but how would I find its maker among all these people, most of whom I didn’t know? So I put the question to those at the table and struck gold. Angela (who makes lovely pearl earrings and also sells at the arts and crafts fairs) was the cook and was happy to share her recipe with me. But good luck finding the Thai red curry paste here in Spain. She buys it by the tubful on visits back to England.

Before heading for home, I went back to spend a few more minutes with my new French lady friends. The people at these parties come in many nationalities and in all types. It’s great when you can make the acquaintance of the ones with whom you click and not let language be a barrier. And for the others, well maybe chatting briefly and moving on isn’t really such a bad idea.
Posted by Dvora at 10:45 AM