Have you heard of Stolpersteine? They are small plaques, 10 centimers (3.9 inches) square, made of brass and set into the pavement of a sidewalk. Inscribed with the name and life dates of victims of the Nazis, the plaques are installed before the last home or place of work of each victim. The majority of the Stolpersteine commemorate Jewish victims of the Holocaust, but there are also many gypsies, homosexuals, Jehovah’s Witnesses, members of the Christian opposition (Protestants and Catholics), members of the communist party, Freemasons, and members of the Resistance, among others. Hitler’s list was long.

Started in 1992 by the German artist Gunther Demnig, The Stolpersteine Project is the world’s largest decentralized memorial. The first plaques were installed in Germany in May 1996; there are now 75,000 Stolpersteine (literally stumbling stones because they are not completely flush with the pavement) around the world, in Germany as well as in Austria, Belgium, Croatia, the Czech Republic, Finland, France, Germany, Greece, Italy, Hungary, Lithuania, Luxembourg, Moldova, the Netherlands, Norway, Poland, Romania, Russia, Slovakia, Slovenia, Spain, Switzerland, Ukraine and as far as Argentina.

Stolpersteine are small and you might not notice one except that they rise slightly above the pavement level to catch your attention. The destruction brought on by the Nazis is so immense that it sometimes seems to be just numbers, much like the deaths caused now by Covid 19. At first it was alarming that 30 people, then 100 people had died. Now 1000 die per day and people are not terribly moved or don’t even notice. So then the Stolpersteine, when you trip over one, brings your attention to the fact that in the house or the shop in front of you lived or worked a victim of Nazism, a real person, and here’s the name. Some of the victims weren’t killed but were forced to go into exile or committed suicide.

Most of the countries where the Stolpersteine are placed are countries that were occupied by the Germans. In some cases, the person lived in a non-occupied country but fought in an allied army or in one of the resistance movements and was captured by the Germans.

Figueres recently installed 11 Stolpersteine for people who were sent to German extermination camps. There are now 230 of these in Catalonia. Spain deported 9161 people to German camps. Mostly they were Spaniards who fought Franco to maintain the Spanish republic, or who came from other countries to fight Spanish fascism with the International Brigades. There were also those politically opposed to Franco. The Spanish government, headed by the dictator Francisco Franco, was an ally of Hitler, although Spain didn’t enter into the war. But allies they were and it was German planes that bombed the town of Guernica, an atrocity made famous by the painting by Picasso. 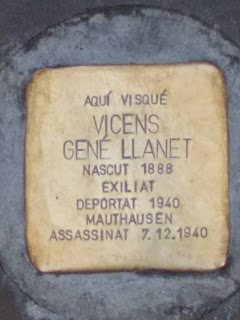 I found one of the newly installed Stolpersteine at one edge of the Plaça de l’Ajuntament (City Hall). Its commemoration reads: Here Lived Vicens Gené Llanet, born 1888, deported in 1940 to Mauthausen where he was murdered on 7 December 1940. Another of the 11 persons from Figueres was Martí Bosch Planas who lived two blocks up on my street. He was also sent to Mauthausen but was liberated at the end of the war. I’ll have to go and see if I can find his plaque.